Album Review: Weyes Blood, ‘And in the Darkness, Hearts Aglow’ 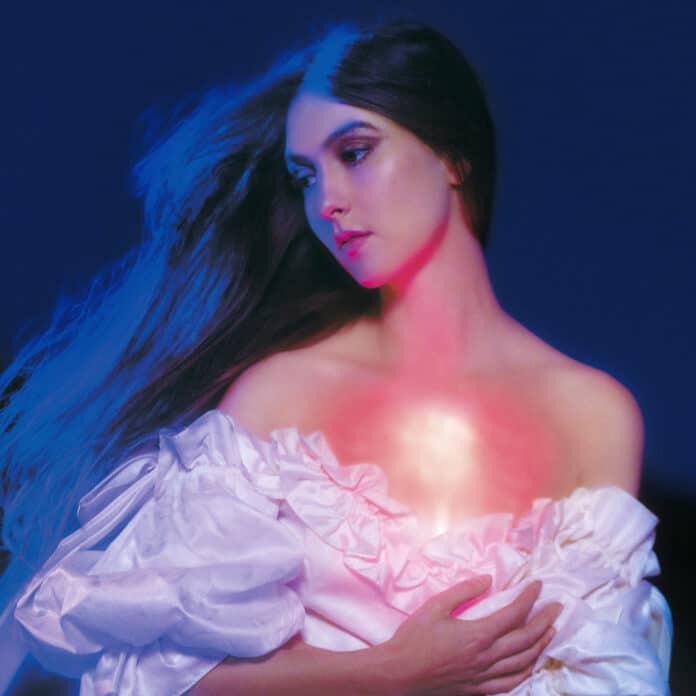 The story of Narcissus has been passed down as a cautionary tale about a man who fell too in love with himself. It wasn’t self-obsession that ultimately led to his demise, but his failure to recognize his own reflection; to differentiate between himself and the rest of the world. The modern individual, plagued by unceasing self-awareness and uncertainty about the future, suffers from a slightly different kind of disillusionment. “In order to polish and perfect the part he has devised for himself, the new Narcissus gazes at his own reflection, not so much in admiration as in unremitting search of flaws, signs of fatigue, decay,” cultural historian Christopher Lasch writes in his influential 1979 book The Culture of Narcissism. “Life becomes a work of art,” and we’re all surrounded by mirrors – in technology, in movies, in culture at large – that help us keep up the theater of everyday life. A capitalist society rewards this performance as the highest form of creative achievement, so we become dependent on it, even if the reality it presents is banal, isolating, and void of imagination. We’re left with not much to believe in, least of all a future.

Belief isn’t just at the heart of Weyes Blood’s music; it is the heart of it. The heart unravels, cracks, illuminates, and Natalie Mering is attracted to it like a moth to a flame. As someone who was raised in a strictly religious household, she was drawn to the idea of wanting “to undo religion but still have the structure, still have that architecture living empty within me,” she said in a recent interview. “My form of worship became centred on music.” Her reverence for the devotional reverberates in many of her songs, especially the ones on her new album And in the Darkness, Hearts Aglow, whose sumptuous melodies often rise like a prayer. Take ‘Children of the Empire’, where a lonesome piano and vocal burst into one of the most heavenly and upbeat arrangements on the record, complete with cello, trumpet, and tuba, before a light flurry of strings and harp (courtesy of Mary Lattimore) lead the dance to its ethereal conclusion.

But rarely does the ritual come alive as nakedly as it does on ‘God Turn Me Into a Flower’, Mering’s retelling of the myth of Narcissus, in which she seems to relate to the pathological condition identified by Lasch – whose work she read while writing the album during the pandemic – as she looks to the crowd for validation. To escape the prison of the self, she curiously turns to the old Narcissus, whose cursed fate becomes the object of her yearning; a plea to be soft and bendable, one with the universe instead of withering into nothingness. “It’s such a curse to be so hard/ You shatter easily/ And can’t pick up all those shards,” she sings, and with the help of Oneohtrix Point Never’s Daniel Lopatin on synths, liberates herself. In the second half of the song, her wordless melody, as hauntingly beautiful as ever, floats amidst otherwordly ambience and birdsong, painting the transformation – and death – in a new light.

And in the Darkness, Hearts Aglow is the second in a trilogy of albums that began with Weyes Blood’s magnificent 2019 LP Titanic Rising. Mering may no longer be an observer of impending catastrophe, as she presented herself on that album, but rather “in the thick of it,” yet her eyes are just as open wide. And while she has promised the third entry will be about hope, she can’t help but find flickers of it here, in the wreckage. “The whole world is crumbling/ Oh baby, let’s dance in the sand/ ‘Cause I’ve been waiting for my life to begin,” she sings on the resplendent ‘Hearts Aglow’, burning brightly despite the sorrow that underlies it. Over shuffling percussion and watery guitar from Foxygen’s Jonathan Rado, Mering calls out a lover who left her waiting in the dark on ‘Twin Flame’, where another realization crystallizes into view: “We are more than our disguises/ We are more than just the pain.” But it’s not enough to change the direction of the song; you sense that Mering is preserving whatever ashes of light she stumbles onto for a greater show of transcendence.

Compared to its predecessor, much of Hearts Aglow sounds notably subdued. Even when it embraces the cinematic instrumentation and emotional grandeur that have become Weyes Blood’s trademark, it grounds itself in simple, everyday realities. There’s a humble melancholy to the first piano chords of ‘It’s Not Just Me, It’s Everybody’, which opens the record with a relatable scene: “Sitting at this party/ Wondering if anyone knows me/ Really sees who I am.” Against the searingly familiar pandemic backdrop of ‘The Worst Is Done’, Mering expresses regret about not staying with her family and instead isolating “in my little place/ In the world’s loneliest city,” referring to the small Californian town of Altadena, where she spent two years crafting the album and where, astoundingly, the only art store is called McGinty’s Gallery at the End of the World. Experiencing the cycle of a relationship offers a glimpse of what it’s like to stand powerless at the precipice of change: love songs like ‘Hearts Aglow’ and ‘Grapevine’ are doomed by the feeling the ship might sink into oblivion at any moment, no matter who’s steering the wheel. But underneath their dazzling, ghostly energy is a more earthly drama: two lovers on a Ferris wheel, one driving back the I5.

Even without the ability to transcend, these songs reach for acceptance, which in turn can yield a kind of love that is selfless, true, and even eternal. Again and again, Mering seeks solace in the knowledge that she’s not alone in her suffering. “Narcissism appears realistically to represent the best way of coping with the tensions and anxieties of modern life,” Lasch writes, “and the prevailing social conditions therefore tend to bring out narcissistic traits that are present, in varying degrees, in everyone.” Coming at the end of that long sentence, in everyone almost sounds like a relief – the way ‘It’s Not Just Me, It’s Everybody’ almost mines a solution from the problem itself. Mering may not see an end to these “prevailing social conditions,” whatever you want to call them – but she fixates on the universal nature of the fears and dreams that simultaneously bind us and separate our existence from others. Having lost control, we find ourselves staring, as she does, not at our reflection or even a flawed image, but “that black water down below.” In the darkness, we might actually see each other. And what better way to freedom?

Album Review: Weyes Blood, 'And in the Darkness, Hearts Aglow'The story of Narcissus has been passed down as a cautionary tale about a man who fell too in love with himself. It wasn't self-obsession that ultimately led to his demise, but his failure to recognize his own reflection; to differentiate between himself and...