Nakhane has announced their third studio album, Bastard Jargon, which is due out next spring via BMG. Today’s announcement coincides with the release of the South African artist’s Leading Lines EP, which features the previously shared singles  ‘Tell Me Your Politik’ (featuring Moonchild Sanelly and Nile Rodgers) and ‘Do You Well’ (with Perfume Genius), as well as a new track called ‘You’ve Got Me (Living Again)’. All the songs on Leading Lines will also appear on the LP. Listen to it below, and scroll down for Bastard Jargon‘s cover art and full tracklist.

“It’s an existential sex album,” Nakhane said of Bastard Jargon in a press statement. “Almost every song on it has some kind of wink towards sex. It’s not necessarily a seductive, come to me, bedroom eyes kind of sex – it’s much more inquisitive, psychological sex. When I wrote ‘You Will Not Die’ it was at the end of my relationship with Christianity, and then when I wrote ‘Bastard Jargon’ I’d moved to London and I threw myself into just wanting to feel good.” 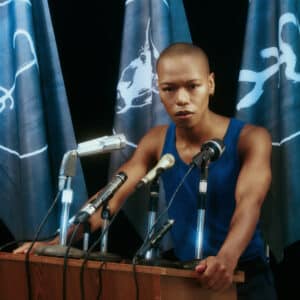