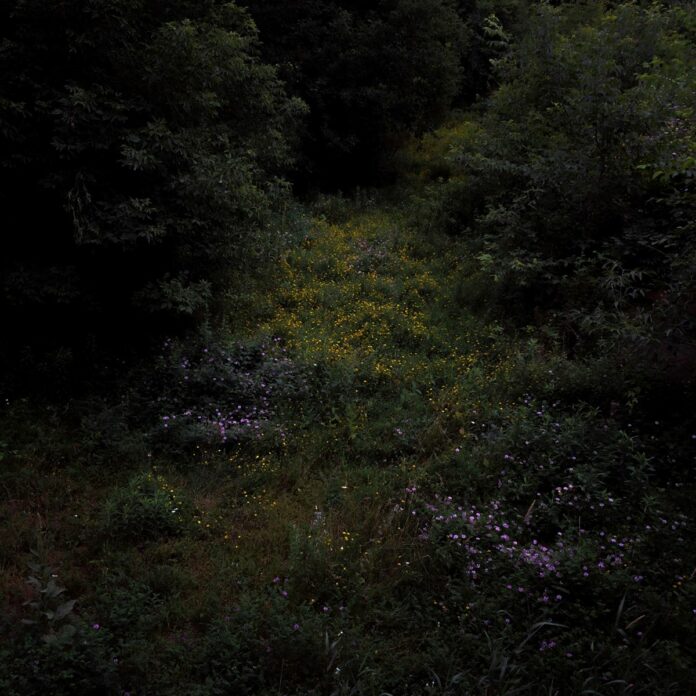 You don’t need to dig too deep into Fireworks’ music to discern a complicated relationship with religion. On their long-awaited new album Higher Lonely Power, God’s glory manifests itself in all sorts of dramatic ways, mostly as an unbearable force inextricable from the oppressive institution it represents. But one of the most potent scenes the band lays out is more earthly and human. “There’s a church up the street/ And on the sign up front they say/ Be a fountain not a drain,” vocalist David Mackinder sings on the album’s closer before injecting his own frustration: “I’m just not that way.” The fundamental issue raised here seems to be not so much of morality or faith but rather temperament, an idea already bolstered by one of the album’s most soaring choruses: “I love my sad life/ I want to start a religion.” Vindictive or reclamatory, the flurry of emotion becomes Fireworks’ own beacon of light, capable of driving back the darkness even as it spews off in different directions. Brought to life by their most widescreen, expansive arrangements to date, you’re left with no choice but to follow along.

This being Fireworks’ first album in nearly a decade, the fact that the final track is called ‘How Did It Used to Be So Easy?’ should strike one as pretty ironic. But Higher Lonely Power is all about the dangers of nostalgia, not cashing in on it. “Hating ourselves since the early 2000s” would be a pretty corny if relatable line for any pop-punk band attempting to make a comeback in 2023 (the album was surprise-released on New Year’s Day after being teased for years), but ‘Funeral Plant’ quickly frames itself as an anthem not of commiseration, but loneliness (“Prayed to be like everyone else/ They found drugs or Jesus/ And I just had myself”), a pervasive condition that makes its presence known throughout the LP. Mackinder, whose delivery sways between surprisingly aggressive (the scorching opener ‘God Approved Insurance Plan’) and consciously vulnerable, doesn’t always draw a concrete line from one sentiment to the next, but the disparity is a sign of how things have – or, as far as hating ourselves and being lonely goes, haven’t – changed with the passage of time.

Though there is nuance in the album’s lyricism, the connections arise naturally, and it’s not too hard to read between the lines. When he repeats “I’ve been wading out in this world for so long” on the ominous ‘Estate Sale’, the word “alone” is sort of lingering the air until it finally comes out freely in the form of a question: “I want to know, who will be left alone?” Or pay attention to the way, from song to song, he flies between “the world” and “the other world,” “this world” and “my world” – minor distinctions, it turns out, as they all appear to be different versions of the same enforced reality. These lyrical details are augmented by subtle production embellishments that render Higher Lonely Power a compelling effort even for someone who has little to no prior investment in Fireworks’ catalog. “Stare into the sun/ It was my baptism in a way,” Mackinder sings abstractly on ‘Machines Kept You Alive’, a short, heavenly track whose percussion suddenly glitches out into oblivion.

I can’t imagine how those who regard the band’s early run as transformative will feel about Higher Lonely Power, but their obsession with the metaphysical – rather than, say, their own history – makes for an enthralling listen. The album reaches dizzying heights whenever its apocalyptic grandiosity meshes with a penchant for experimentation, which is why ‘Jerking Off the Sky’ – whose absurd title, you must know, is taken from a Charles Bukowski poem that includes the clarifying phrase “with a giant penis of hate” – is such a breathtaking centerpiece. Their sound is reinvigorated without coming off as alienating, no small feat for a band that could have spent the last few years building on the anticipation behind ‘Demitasse’, the striking seven-minute single they dropped in 2019 and then decided to leave off the album. Instead, Fireworks usher us in a world that’s new and entirely of their own making, even if they still can’t shake off the ghosts of the past.

Album Review: Fireworks, 'Higher Lonely Power'You don't need to dig too deep into Fireworks' music to discern a complicated relationship with religion. On their long-awaited new album Higher Lonely Power, God's glory manifests itself in all sorts of dramatic ways, mostly as an unbearable force inextricable from the oppressive institution...