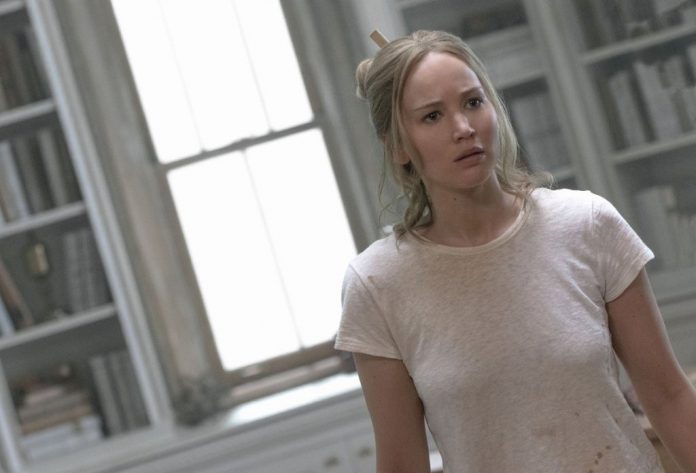 Following up my review of mother! I wanted to write up my interpretation and deeper thoughts of the film. It was difficult to fully explain what I loved and thought about the film without spoiling it in my original review.

I believe there are a million different ways to interpret this film and every individual will have a different idea on what the movie is to them. I believe there are aspects on the surface of the film that is clear to see what they are and mean that the actors and director have themselves stated.

Furthermore, I went into this film knowing nothing, possibly heightening my experience as people I know who watched the trailer and then the film didn’t get what they were expecting and so the disparity of reactions is brilliant to see.

The themes of the film straight off follow religion and humanity, adapting from the bible and specifically the Book of Genesis. Javier Bardem who is a strugging poet represents a form of God, Jennifer Lawrence is mother and the house is earth and more specifically the Garden of Eden, when we see mother touching the walls of the house and recognizing the heartbeat we begin to understand that mother and earth are one equaling mother earth. As mother spends her whole time rebuilding the house and mending to it she wants it to be a paradise for her and Him. This is interrupted by adam (Ed Harris) who enters the house to the happiness of Him and to the concern of mother who is still welcoming. adam is free to walk around the house except he is not allowed to touch the large crystallised object that sits in the study, this is a symbolism for the forbidden fruit. During the middle of the night we hear adam gagging in the bathroom while Him tries to comfort, mother takes a quick glimpse as a scar on the back of Adam. This is the scar from where eve was created from one of adams ribs.

The next day we see eve (Michelle Pfeiffer) arrive, she is not as kind as adam and tries to go near the crystallised object, eventually they get their hands on it only for it to break, symbolising adam and even eating fruit from the forbidden tree and ruining Him’s trust. As mother asks them to leave the couple’s sons, Cain and Abel, interrupt them, as the younger brother dies from the wounds received from the oldest son they rush him to the hospital where he is pronounced dead. As they set up the wake in the house to the reluctant mother she is constantly nervous of everyone occupying the place, Him realises that these people are fans of him, he begins to love and adore them welcoming everyone in. As more and more people arrive we see the house begin to break, breaking mother herself. As the sink breaks and floods begin (Noah’s flood) mother is eventually able to kick everyone out. mother becomes angry with him for allowing so many people in and ignoring her, she attacks him before the two have sex.

The next morning, mother tells Him that she is pregnant, resulting in Him finally having the inspiration to write; he announces his new work (The new testament) to his publicist resulting in everyone finding out. mother then makes dinner in celebration for his work, unfortunately a gathering of fans come to see Him, beginning to flock to his people instead of focusing on mother we see more and more people arrive. The people begin to take from the house, destroy it and perform countless sins. As the house becomes a war zone, mother goes into labor, Him and mother go into the study and mother gives birth (to Jesus). Him wants to show the baby off to the people but mother is disinclined, when mother falls asleep Him takes the baby and shows it off to the people, resulting in the people carrying the baby and snapping the neck (which is one of the most horrifying sounds in cinema) as mother cries out they begin to eat the baby (communion) mother fights back, stabbing the people (Climate change) and as the people violently attack back and strip her, mother is saved by Him.

mother escapes through the crowds to the core of the house where the oil tank is, she breaks the tank and it begins to leak. Him tries to reason with her but mother cannot take it any longer, she flicks the lighter and burns the house down (apocalypse) Him carries mother and rests her, Him takes her heart out, he brushes it off to reveal a crystalised object which he then places in a frame, mending the burnt house and creating a new mother repeating the beginning of the film.

So the film is a biblical metaphor, it depicts the horror and suffering that Mother Earth goes through. Slowly we see the destruction of the earth through Gods other creations. As his creations (People) worship and love him they ignore what they are doing to mother earth, and as mother constantly tries to be welcoming and tries to rebuild her home people are stopping her and have no care for it. People kill what mother earth creates, so much so that it results in the apocalypse as earth is engulfed in fire killing every human around. As Michelle Pfeiffer says in the film talking about kids, “You give and give but it is never enough” as mother gives and gives to Him but it is never enough. Him cares more about the people than earth, as do we. The film ends with Him restarting, history infamously repeats itself, as Him tries to get perfection we know it has not worked before, and it has not worked now and will not work in the future. As the last acts violence escalates so quickly this shows how little time humans have been on earth and how quickly we have destroyed the earth, through people blessing others in the name of Him and violence and wars in the name of Him erupting the escalation is so intense as with the population of the people. As Him again and again forgives the sinful acts that the people do mother does not understand why.

Some of the small details in the film include the lighter that adam owns that mother tries to hide and eventually uses to cause the apocalypse bears the Wendehorn, which symbolizes ‘life’ and ‘death’ respectively. The 10 plagues subtly feature throughout the film as well as Kristen Wiig’s characters being Gabriel aka Him’s publicist. Shrines are created for Him; people are taking pictures with Him and needing love form him while mother is ignored. How the only capital letter in the credits is ‘Him’ while everyone else is lower case. One thing that I do not understand and is unexplained is the yellow powder that mother constantly drinks when she is in panic.

Overall, I’m sure there are many more metaphors and symbolism throughout the film to touch upon. You can defiantly see this as pretentious or artists similar to the how the bible is perceived but either way Aronovsky is ambitious and demanding. He tells the story of the old testament, the new testament and what the future most likely will be, how humanity acts and what religion has done to the world. Through the eyes of mother we really see the horror of humanity and how creation is never enough. My interpretation may be wrong or right but either way the film is getting people talking and thinking up new ways to see the film. Finally, at the very beginning of the film we see the exclamation mark drawn on with a little ding the accompany it, maybe this is Aronovsky saying what we are doing is so hilariously brutal or maybe the film as a whole is just a joke. Aronovsky wanted a reaction and he got one.