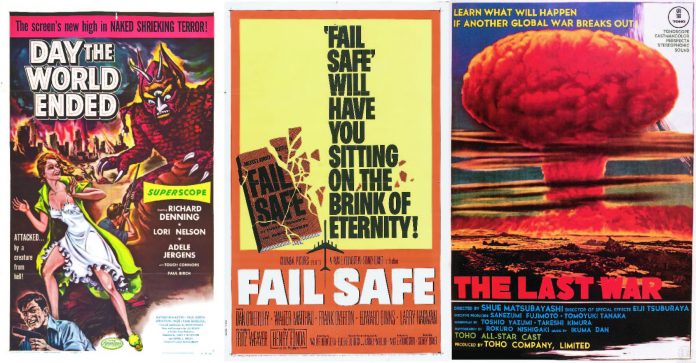 The idea of a global nuclear conflict is one that has, sadly, been at the forefront of the public’s mind over the last few months. That it could happen is horrifying; a concept that many of us can scarcely begin to comprehend.

Ever since the atomic door was opened in 1945, cinema has embraced our societal fears and interpreted them in ever-changing ways. From the radioactive monsters that dominated science fiction in the 1950s, to the brutal realism of nuclear annihilation in the 1980s, cinema has articulated our understanding of a potential apocalypse.

The following three films address such a horror, but tend to be overlooked in discussions of nuclear cinema. Whilst Mick Jackson’s Threads (1984) is a landmark film in this field, it will not feature here. Instead, Our Culture Mag wishes to take a look at three films whose expression of the nuclear nightmare is unique, outlandish, poignant, and tragic.

Reviewed here on Our Culture Mag, The Last War is a film whose inaccessibility for western audiences has thrown its brilliance to obscurity. Shüe Matsubayashi delivers a powerful drama of a family pressing forward in a world doomed to conflict. Frankie Sakai plays Mokichi Tamura, a proud family man, who works as a chauffeur for a press centre. Through Tamura’s interactions with the journalists he escorts, we learn of the growing tensions between the Federation and the Alliance – stand-ins for NATO and the USSR. Tamura’s optimism that mankind will not blindly walk into warfare is juxtaposed to the reality of a world setting itself for oblivion. Sakai’s performance is gripping, especially when his beautiful hope begins to crack.

With thoughtful cinematography that interprets the narrative’s horror with grace, The Last War has some remarkable – and chilling – visuals. For its performances, tone, and visual impact, The Last War is worth tracking down, watching, and thinking on.

Sidney Lumet (director of 1957’s 12 Angry Men) crafts a tense narrative that challenges our belief in the evil of the ‘other’ and what it takes to trust. The US Air Force’s early-warning radar system signals an unknown craft entering American territory. It is soon found that the unknown craft was simply a commercial airliner blown off course, but a malfunction sends a group of vindicator bombers out to Moscow to drop two 20 Megaton nuclear warheads in retaliation. Russian countermeasures jam the bombers’ signals, stopping the US from recalling them. The President (Henry Fonda) is alerted as every effort is made in a race against life and death to call back the bombers before they can drop their grave payload.

As with 12 Angry Men, Sidney Lumet displays a striking ability to weave what is admittedly a self-contained narrative into a tableau of humanity. With mankind’s very survival thrown into question, the barriers between our hate and anguish fall away. Fail Safe is arguably a story about trust; and tragically, its awful cost. It might be easy to assume that the film’s immense scope is down to its dealing with apocalypse, but the real power within Fail Safe that gives it such depth is its performances. For extended sequences, we are alone with just Fonda’s President and Buck (Larry Hagman), his interpreter. In his brilliant vocal delivery, Fonda projects a man struggling to maintain his composure under immeasurable pressure. Cinematographer Gerald Hirschfield frames these characters in tight close-ups, heightening tension that is beautifully complemented by such powerful performances. So much is communicated in Fonda’s eyes.

Fail Safe is a moving, tragic, and sobering watch – one of Lumet’s finest.

Many might be surprised to see Roger Corman’s Day the World Ended included in this discussion. With its poster bearing an intimidating blood-red mutant, one might expect an unintelligent monster movie. On the contrary, whilst the writing is questionable, the camera work is stagnant, and the performances are relatively wooden, it is the fascinating concept of Day the World Ended that warrants a closer inspection.

A nuclear conflict has wiped out nearly all of mankind. One man, Jim Maddison (Paul Birch), foresaw such a conflict and with his daughter, Louise (Lori Nelson), readied his home and stockpiled supplies. His home is located in a lead-lined valley, the cliffs of which shield those within from the toxic fallout that has contaminated the outside world. More and more survivors stumble upon the valley and Maddison’s home in varying states of injury – some with horrific burns and scars. Tensions rise as these disparate individuals struggle to survive in the house with one another. Outside, the radiation has created atomic mutants, stalking the valley looking for food.

If the writing and performances were better, and the plot more carefully paced, then Day the World Ended could have been one of the most interesting nuclear war dramas of the decade. Even the mutant could remain in the story. After all, its fantastic presence already allows for metaphorical or symbolic significance.

Speaking about hypotheticals such as these might seem redundant, but it does arguably point out that at its core, Day the World Ended has a fascinating concept of survivorship in the face of mankind’s demise. While some nuclear war dramas depict the lead up to such conflicts (The Last War, Threads, The Day After) and others show its extended aftermath (Five, The World, The Flesh, and the Devil), Day the World Ended begins immediately in the wake of such calamity. Its dissection of human relationships and their changing dynamics in the aftermath of destruction is admirable, if made slightly ham-fisted with lacklustre writing.

Aside from its premise, Day the World Ended is worth watching for Paul Blaisdell’s brilliant atomic mutant. Affectionately named ‘Marty the mutant’ by Blaisdell, the film’s monster lends a fantasy element to a film which – in the same way that it could have been profound – could have become dull in its depiction of survival.

The above three films illustrate the bold and brilliant ways that 20th century filmmakers from diverse backgrounds articulated something almost unspeakable. From mutant monsters, to deadly malfunctions, to the complexities of family life, these films express the depth of our anxieties. That we are in the midst of retreading those fears is just as frightening, but perhaps in revisiting these classic tales, we can begin to understand our collective nuclear trauma and go forward.