Review: All or Nothing: Manchester City 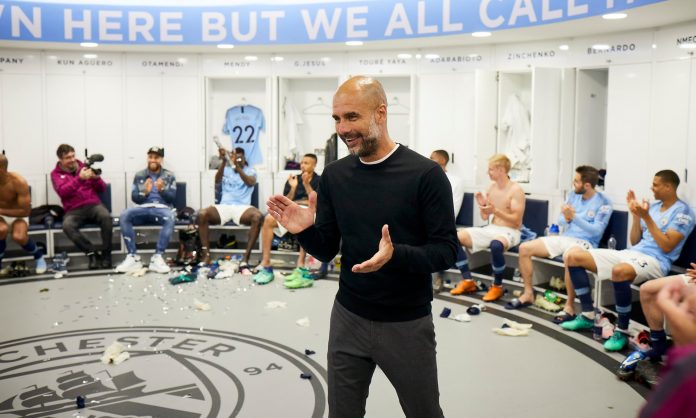 Manchester City truly gives there all, but there is nothing for them to lose.

Amazon Prime’s newest ‘All or Nothing’ series follows Premier League giants Manchester City as they attempt to win the Premier League, Champions League and two domestic cups over their record-breaking 17/18 season. The series follows everyone at the club from the players to the managerial staff to the fans and even the kit assistant; with behind the scenes footage of locker room antics, training sessions, heartfelt one on one interviews and anger infused conflicts ‘All or Nothing’ provides a fly-on-the-wall look at what happens off the pitch.

As we enter the 17/18 season, we start with a look at Pep Guardiola, one of footballs finest managers. Guardiola is coming in from his dominant run in Germany and Spain with Bayern Munich and Barcelona. We see he has already implemented his attitude and ethics to the club, however this season he aims to dominate the hardest league in the world – the Premier League. We get an excellent look into Guardiola’s vision and passion which comes with constant swearing, anger and a pure determination to win – this is all he wants to do and will work in any way to achieve it.

His players are equally as passionate, they present themselves as a family, they are cheerful and hardworking, obsessive and skillful; I don’t believe they act differently in front of the cameras, the desire is there regardless, and it creates a real understanding of what a win and a loss means to the players and the club. Furthermore, the series displays their life outside of football – in the case of David Silva’s struggle with his son’s premature birth and Kompany’s awkwardly finding out he has won the league next to his Father-in-law who is a Manchester United fan. The players aren’t just colleagues but friends, they have a connection on and off the pitch, they celebrate the highs and fight through the lows.

With the passion and excitement from the staff, players and fans creating an entertaining and exciting series there are issues to be noted – Manchester City had an incredible season as they became ‘centurions’ to win the league, winning a domestic cup and scoring goals like it was nothing their team was a delight to watch. However, the show rarely explores the low points, it fails to reveal as much as it should have, you know there is more to show, but it leaves you slightly empty-handed. Moreover, Manchester City are one of the richest teams in the world, they have some of the best players and facilities in the world, and their money seems unlimited to their hapless opponents. While the money and achievement are seriously impressive, it takes away a lot of tension of the show, the team doesn’t struggle in any sense and as any avid Premier League viewer knows Manchester City have been this way for a several number of years, so their fight to win the league was impressive but not unexpected.

Overall, you’re never on the edge of your seat, the lack of development on certain aspects and a shortage of pressure on the team doesn’t generate much entertainment. Nevertheless, the series does do well to capture behind the scenes of the club, to show audiences off the pitch moments, to view the staff and players in their natural spaces and consistently presents heartfelt moments, comedy and charismatic people that keep the series enjoyable.

Review: All or Nothing: Manchester CityOverall, you're never on the edge of your seat, the lack of development on certain aspects and a shortage of pressure on the team doesn't generate as much entertainment. Nevertheless, the series does do well to capture behind the scenes of the club, to show audiences off the pitch moments, to view the staff and players in their natural spaces and consistently presents heartfelt moments, comedy and charismatic people that keep the series enjoyable.