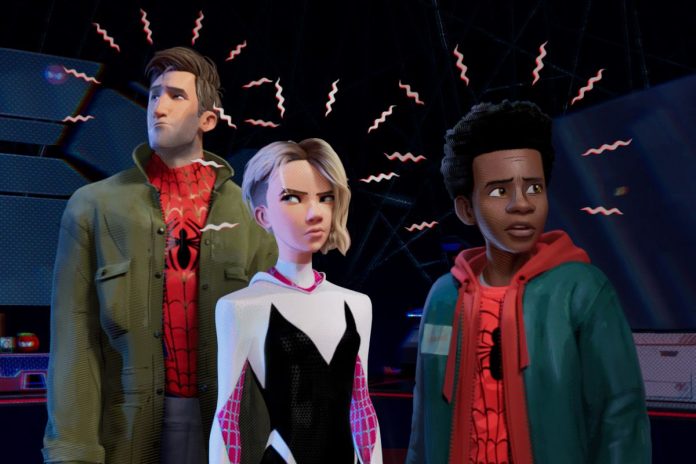 Visually explosive, consistently funny, and with a tremendous heart, Spider-Man: Into the Spider-Verse swings into cinemas with unmatched vibrancy. A feat of animation and editing, Into the Spider-Verse brings to cinematic life several of Marvel’s lesser-known Spider-heroes. Shameik Moore and Jake Johnson head up the brilliant cast, whose performances carry us through what is arguably the very best definition of a “comic book movie”

Miles Morales (Shameik Moore), a talented young artist, struggles to navigate his relationship with his cop father (Brian Tyree Henry) when he’s sent to an elite boarding school. Through his Uncle Aaron (Mahershala Ali), Miles escapes one evening to a secret den under the subway where he’s free to produce the art he longs to. Whilst there, he’s bitten by a radioactive spider. At the same time, crime lord King Pin (Liev Schreiber) begins testing the Super Collider, a device to access parallel universes, in the hopes of finding his wife and son who have died in this one. When the Spider-Man of Miles’ universe (Chris Pine) dies trying to stop King Pin, it is left to Miles and his new-found Spider powers to stop him. Unbeknownst to both of them, Spider-heroes of other universes have been sucked into Miles’. The older and weary Spider-Man of another universe (Jake Johnson) soon becomes a pseudo-mentor to Miles, whilst the pair slowly come across the other Spider-heroes, like Spider-Gwen (Hailee Steinfeld), Spider-Noir (Nicolas Cage), Spider-Ham (John Mulaney), and Peni Parker (Kimiko Glenn) – all of whom know it’s only a matter of time before King Pin uses the Super Collider again, and threatens existence itself…

With a huge heart, Into the Spider-Verse successfully weaves a story of endearing characters and personal stakes. The difficult relationship between Miles and his father is one we invest in, as Miles struggles to define himself against his father’s expectations. Expectations as a theme is one of the film’s strongest aspects, as Miles and the other Spider heroes all acknowledge those placed on them – in many ways by themselves. The central message that we can’t ever know if we’re “ready, or if we’ve “lived up” is one handled with great credibility. Doing what’s right isn’t easy, but to try, and to take the “leap of faith” as Johnson’s Peter Parker says, can help us to escape the oppression of expectation.

Shameik Moore delivers a wonderfully vulnerable performance as Miles. We empathise with his desire to be himself, but especially with his difficulty in defining who that self is. Jake Johnson’s Peter Parker is also brilliant, juxtaposing his self-assuredness in teaching Miles with the personal anguish at the state of his life in his own universe. Moore and Johnson make for a great duo, giving us some of the best lines in the film, and stirring the development in each other’s character.

Hailee Steinfeld’s Spider-Gwen has a grace and elegance to counter the still-learning Miles. A quiet moment on a bus between Miles and Gwen really allows her to shine, as she opens up about her past, and how she’s shut herself off to new people. In acknowledging Miles’ new powers and his difficulty mastering them, she sees someone struggling how she did, and in turn he sees that his journey isn’t one he walks alone. Steinfeld does a terrific job projecting that emotional toll. In moments such as these, Into the Spider-Verse shines with its considered grasp of connection and compassion.

Into the Spider-Verse immediately assaults one’s senses with its striking and vivid animation. Reflecting the merge of different universes, each Spider hero has their own distinct look and style, providing more visual variation in one film than most live-action superhero offerings have between them. From the onomatopoeic words that follow characters in their fights, to the CMYK colour tones (to match the look of a comic printing press) of the world, Into the Spider-Verse is a comic book come to life, perhaps the best definition of a “comic book movie”

Complementing the animation is the fast pace. The writing allows the story to progress quickly, moving from beat to beat with nothing superfluous. The slick editing means that fight sequences are punchy (literally) and don’t drag. The pace also helps the film’s comedy, with each joke, one-liner, or visual gag timed to perfection.

Speaking of comedy, special mention must be given to John Mulaney’s performance as Peter Porker a.k.a. Spider-Ham, brought to life with all the smooth-edged iconography of a Looney-Tunes cartoon. From his first line onscreen (“It can get weirder!”), every line or action from Spider-Ham is a “remember that bit when…” moment. Mulaney injects his distinct brand of confident absurdity to make a memorable and endearing powerful pig.