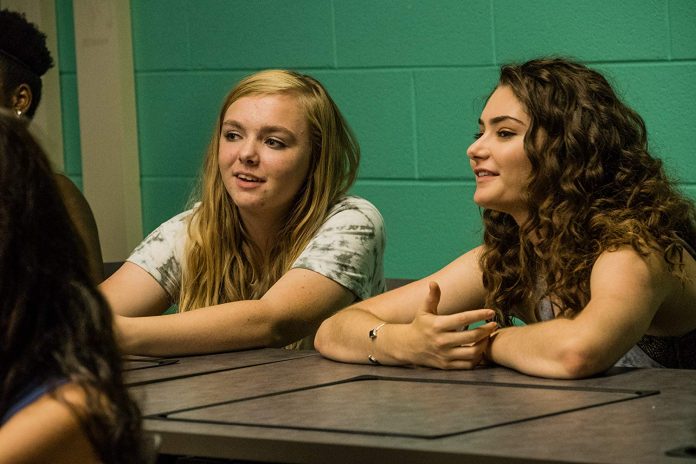 Eighth Grade is an agonisingly realistic view of the most awkward stage of growing up, done respectfully and brilliantly.

Kayla Day, played by Elsie Fisher, is a thirteen-year-old in her last week of middle school. Kayla posts YouTube videos on her account called ‘Kayla’s Korner’ where she gives life tips to the minuscule number of viewers she gets. Her videos giving advice about confidence are a stark contrast to her real life where she is so shy that she was voted the ‘Most Quiet’ in her year group. The film follows Kayla as she tries to be more confident, make friends, talk to that boy she likes and generally just survive the last week of middle school.

Whilst lacking in a clear narrative structure, with the film seeming almost like a documentary at times, Eighth Grade is very successful in giving us the adolescent story of Kayla Day. There is rarely a moment in the film where you won’t feel an intense emotion of some sort, as director Bo Burnham grabs your attention and doesn’t let go, regularly toying with how you feel using scenes full of embarrassment, fear, awkwardness and, every so often, relief and happiness. When he wants you to feel the embarrassment of the scene, he’ll have you sinking into your seat, and when he leaves you in suspense of what happens next, he’ll have you on the edge of your seat in anticipation, hoping that Kayla makes the right choices and that things go well for her.

The casting choices in this film are excellent and having opted to use actual 13-year-olds to play kids in middle school pays off greatly. Elsie Fisher, in particular, gives a perfect performance, which is not only impressive at her age, but was also essential as she is in every single scene in the film. Fisher’s personality being so similar to that of the character she plays allows her to give an incredibly naturalistic and believable performance and without her, Eighth Grade would not be as brilliant a film as it is. Josh Hamilton also gives a great performance as Kayla’s dad; It’s clear that he cares for his daughter deeply and wants to understand her, but understanding teenagers has never been a simple task for parents, and this is made blatantly obvious by his attempts at conversation with Kayla. The rest of the cast did not disappoint; performances of note were given by Emily Robinson who plays Olivia, a friendly high schooler, Catherine Oliviere who plays Kennedy, a popular girl who treats Kayla unkindly and Jake Ryan whose portrayal of Gabe, Kennedy’s cousin, is instantly lovable.

Burnham’s regular use of long takes allows us to experience each situation as fully as Kayla does, which when applied to the more awkward and embarrassing scenes in the film, can make you feel so extremely uncomfortable that you’ll wonder “when, just when, will this moment end”. This makes it that much easier to sympathise with Kayla and cheer for her to succeed and be happy. The choice of music used throughout the film is excellent and allows us to better understand how Kayla sees things and certain people, such as when, seemingly out of nowhere, loud EDM is played as Kayla looks at her crush Aiden, played by Luke Prael. Whilst over the top, this choice allows you to understand just how much she likes this boy.

Burnham, with the help of his young cast, shows an incredible understanding of how 13-year-olds behave and talk, making the film feel all the more based in reality. The comedic moments in the film always hit perfectly and do well to lighten the mood when things seem so dire. So much of the film has things go wrong for Kayla that those few happy moments we get feel so much more rewarding. The film feels so real, and you’ll feel so invested in Kayla’s story that towards the end of the film you’ll find it difficult not to tear up.

Eighth Grade explores many issues that come with adolescence and growing up in the age of social media. The pressure of being active on apps such as Instagram and Snapchat, the need to feel accepted by your peers and to feel like you belong, the struggle to be noticed by that person you like, trying to enjoy a party and be comfortable whilst being socially anxious and terrified of the idea, the risks of being alone with strangers and how quickly a fun day out can become a terrible and frightening experience. All of these topics and more are covered in the film, and Bo Burnham treats them, as well as the characters, with understanding, integrity, and respect.

Without a doubt, Eighth Grade is the most accurate coming of age film about being 13 to have been released in a very long time. While it may not be an accurate portrayal for everyone who’s ever been at that stage in their lives, most audiences will find that they relate deeply to the feelings and experiences explored in this film. The message that the film delivers about these experiences and how you can move forward despite them is so important; in fact, Eighth Grade is a must watch. With that, it can be said that Bo Burnham’s directorial debut is a phenomenal one.

Eighth Grade will be released in UK cinemas on the 26th April 2019.