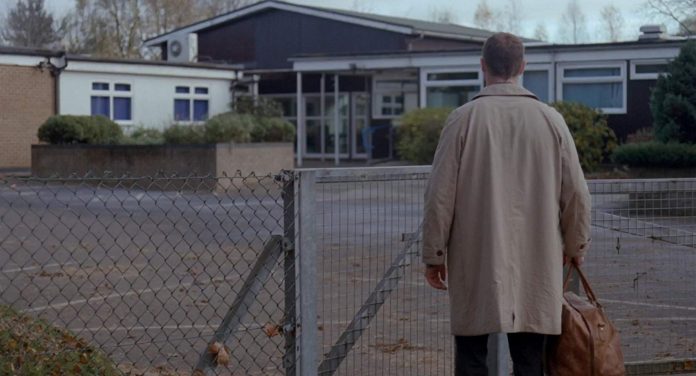 Possum is one of maybe 3 films, total, that have left me utterly speechless. The others being Martyrs – which is so utterly gruelling to watch it physically exhausts you, and Hereditary, which is so good I physically could not speak for the huge grin it painted on me. Possum on the other hand, is about as far from a party film as you can get. It is not a film, I think, to watch with your mates. It’s best seen alone, and fully awake – although, in those circumstances you will probably want to find a way to stop watching. Don’t.

It’s largely toted as an ‘indie horror’ and while yes, that’s absolutely fair, it’s an exquisite horror film and inspires dread and bleakness in such a subtle, almost effortless way – you should not dive into it expecting something you can sit back and consume. Possum’s power comes, not from The Things That Go Bump In The Night, but instead, in an unflinchingly raw drama that is painfully real. Possum rings of truth –  Sean Harris’ faultless performance screams love and care for a character whose world is thoroughly devoid of those things. You are struck with the feeling that you have walked past Philip in the street, that you’ve served him at work, that you’ve seen him in the line at the post office.

And that’s just it, what makes it so magnetic and profound. Possum’s story is so abhorrently horrific, but we hear it all of the time. It taps into that small part of your mind that tries to cower away from the awful things that happen in this world and demands that actually, you sit here for 90 minutes and you think about them. It gives you a monster – a monster that’s incredibly easy to hate, to want to hate, to want to look away from – and says, now is the time to exercise your empathy. Possum pushes your sympathy to its absolute limits and teaches you that in the end, actually, your sympathy was justified all along.

That monster is so brilliantly visualised in Odd Studios’ deeply unsettling Possum marionette. It’s completely horrible to look at, a masterful cross section of human fears and an inspired shorthand for the trauma that haunts the protagonist. When the puppet is on screen you desperately do not want it to be. Everything from its blank stare to the bluntness with which it moves. ‘Why would anyone want to see this?’ is an easy question to ask of the disgraced puppeteer, but it is, of course, the only thing that Philip sees.

The film is full of bleak, startling imagery, but it’s hard to discuss these moments without ruining their impact. Matthew Holness knew exactly what he was doing and has put together a melancholically beautiful piece of cinema that is guaranteed to haunt and unsettle, a character study as quiet and intricate as it is riveting and rewarding to watch.

Don’t get me wrong here – Horror is my favourite genre, and I’m firmly of the opinion it has the sharpest tools for cutting quickly to the crux of the human condition – but as a magnet for thrill seekers and outcasts, it has a bit of a problem with gratuity and voyeurism. There’s nothing wrong with gore and excess, there’s nothing wrong with putting your stomach and adrenal gland through its paces. There’s even plenty to be learned from it, about the world and about yourself. But, in its subtlety, Possum soars over all of these things and presents horror – true horror, more true perhaps than anything preceded with “based on a true story” – that lingers with you, that forces to weigh it in your mind. There is catharsis in this film but it is limited – and that’s only right, I think. Because it is, at its heart, a story about trying to live with and overcome life shattering trauma. It is as much up to us to decide whether Philip will ever be free, as it is up to him – and god, do you want him to be free. To take a character so immediately repellant and have you – or at least me – in floods of tears, hoping he will find a moment of peace; that’s the mark of cinematic storytelling so powerful it’d be criminal to miss it.

Possum will stick with you. It will come back to you in the quiet moments you least want it to. It might even ask you to handle the world, and the strangers within it, a little more gently.