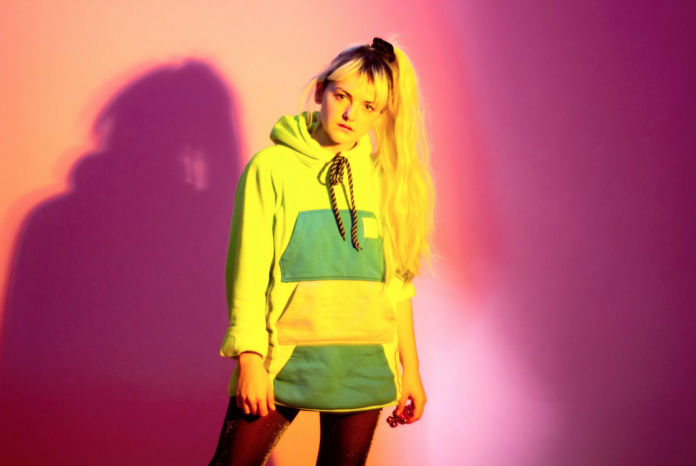 “Gentle but loud. Pop songs but not. Floaty but tough.” This is how UK electronic artist BABii describes her music. Indeed, what makes BABii’s impressive debut album HiiDE so unique is that it’s so many things at once: entrancing, eerie, heartfelt, smart, catchy, mature, vibrant. Comparisons have been made to artists like Grimes and Purity Ring, but they don’t really express the full spectrum of her DIY aesthetic and sound as a whole, which blends dreamy melodies with spacy instrumentals and lyrics that range from cleverly allegorical to emotionally direct. In this interview, BABii talks about her inspirations and creative process, touring with Iglooghost, and more, with the help of some good old-fashioned symbols.

When did you start writing music and what are some of your biggest influences?

☆*:.｡.  I’ve kinda just always done it, I don’t think I’ve lived a day where I haven’t made something, whether that’s a song, a picture, a story, or whatever. I just can’t help it. I started producing music when I was about 14 or something though, I had absolutely no guidance from anyone or any idea what I was doing (YouTube tutorials weren’t really a thing then), so it was really tricky, and I was trying to make beats on audacity on the family windows vista computer with my sisters toys and stuff, and it kinda worked, but with a lot of persistence, but I didn’t wanna give up.  .｡.:*☆

*:･ﾟ✧ In terms of influences, I always find that a strange question to answer, because I make things pretty much purely intuitively and never really consciously reference anything, I hardly really listen to music anymore, I like watching tv and listening to stories and looking at nice things, and I think that’s something that seeps into what I am doing, because I’m always trying to paint a picture with the sounds I use, I try and have some kinda an imaginary environment I am trying to place the listener in, and try and take them on a little journey through it.  ･ﾟﾟ･｡

How would you describe your sound to a random person on the street?

Gentle but loud. Pop songs but not. Floaty but tough.

What are some of the inspirations behind your art aesthetic?

*•.¸♡ I like everything all the time, its so many things! I think a lot of it comes from being a scruffy little Tom boy when I was a kid, so I wanted to do something super feminine and girly, but still have some elements that are a bit scruffy around the edges so it’s just a reflection of who I am on the surface. It’s kinda funny because it’s similar how I present myself in real life, on first meeting I’m kinda like this girly bouncy imp but when you get to know me I am way more scrappy than that, and I’m sure that will shine through as time goes on. I’m just being me. ♡¸.•*

What is it that you love about the lower-case ‘i’?

«•´¯`• ii JUST THOUGHT iiT LOOKED NiiCE WHEN ii WROTE BABii SO ii CONTiiNUED WiiTH iiT AS A THEME ON THE iiNTERNET AND OTHER STUFF. ii NEVER REALLY DO iiT iiN iiNTERVEiiWS CAUSE iiT WOULD MAKE THiiNGS TO HARD TO READ. «•´¯`•

What would you say ‘HiiDE’ is about as a whole?

◦•●◉✿ It’s just about the deterioration of a relationship, and feeling like a secret and keeping secrets. I think the word HiiDE defines it really well, not just because of the theme of secrets but also because of having a hide to protect myself when I was going through those hard times. ✿◉●•◦

How was the process of recording and producing the album?

｡･ﾟﾟ･  It was kinda all over the place really I recorded it in multiple places and over a couple of years. Mostly because I was just making songs to process the stuff I was going through and not really with the intention of making a body of work, let alone an album or even really releasing it. But people like Adrian Sherwood, my friends at Big Jelly Studios, Iglooghost and Andy (who is now my amazing manager) clocked on and made me brave enough to do something real with it rather than letting all the songs collect dust in my laptop..・゜゜・

How was it like touring and working with Iglooghost? Did he give you any good advice?

༼ つ ◕_◕ ༽つ Don’t you mean how is it? I see that boy everyday of my life. Haha. He has never really given me any very obvious direction in what I am doing, but I think we bounce a lot of stuff off each other and we get more powerful and smarter everyday we spend together, because we balance each other’s strengths and weaknesses. I feel about 1000x smarter since the first day I met him. We are like 1 person with 8 limbs and also inspires me everyday! ༼ つ ◕_◕ ༽

✧･ﾟ: *✧･ﾟ:* Going on tour with him was wild because at that point I had never really released any music so no one knew who I was, apart from some crazy iglooghost fans who had learnt my songs from them being dropped in some mixes, some of them even knew the words. I also thought it was funny to make shirts that said “who the hell iis babii” for the tour, to keep within the theme of no one knowing who I was.  *:･ﾟ✧*:･ﾟ✧

Could you talk a bit about the metaphor on ‘CARNiiVORE’?

‧͙⁺˚*･༓☾Haha, everyone always thinks it’s something to do with being a vegan or something, but it’s not. It’s kinda complicated, I have some songs that I wrote in the past that were using vicious animals as metaphors for the person I was singing about, such as sharks and stuff. So it was kinda a continuation of that. To put it simply it’s about falling in love with someone that you know is just gonna hurt you.☽༓･*˚⁺‧͙

What’s your favorite song on the album?

❃.✮:▹ It changes all the time but at the moment I think it’s POiiSON. But obviously I like all the new things I have been making the best! I’ve been making a song called DRiiFT today and it’s meant to sound like when a bunch of boy racers threw bricks at my house when I was 3 after my dad took a hammer to one of there cars for doing stupid stuff on our street for too long. It’s fun. ◃:✮.

What are your plans now that the album has been released?

I am making so many things. I just finished making a mixtape with Kai Whiston and Iglooghost and we are dropping a single from it very very soon! I am also finishing my second record, starting a book and developing my live show more. So I’m keeping busy to put more things out into the world!