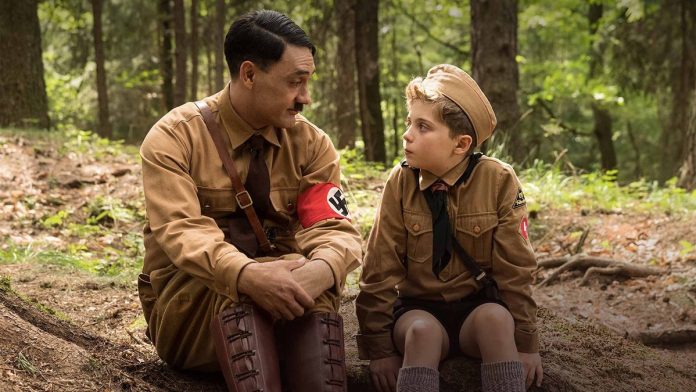 This week Todd Phillips, director of various comedies (such as Old School, Road Trip, Due Date and The Hangover trilogy) before turning his attention to the much-hyped, gritty Joker origin film, brashly stated that he had moved away from comedies because they are now too challenging to make with today’s “woke culture”. In light of this statement, it feels more pertinent than ever to discuss a comedy by a director, Takia Waititi, who candidly responded on twitter to the news of Phillips’ proclamation with the comment: “lol he funny”.

Following-up from the critical success of to Hunt for the Wilderpeople and box-office hit Thor: Ragnarok, Waititi’s new comedy film Jojo Rabbit sees a combination that many, prior to the film’s release, would consider inconceivable: satirical comedy, Scarlett Johansson and Nazi Germany – the most divisive, provocative and inflammatory period of history in modern times that would be bound to stir today’s said “woke culture”.

Based on the novel Caging Skies by Christine Leunens, Jojo Rabbit is set in Germany during the final year of World War II and tells the story of Johannes “Jojo” Betzler (played by the impressive Roman Griffin Davis), a passionate, 10-year-old boy who wants nothing more than to conform to the demands of Hitler Youth and to be a true, little patriot of Nazi Germany. The Nazi ideology is so overbearing and blinding for Jojo that he manifests an imaginary version of the Führer, who continuously appears to provide counsel for the boy and is played by Waititi himself.

After an unfortunate pipe-bomb incident at a training camp and persistent bullying by other members of the Hitler Youth when he refuses to strangle a rabbit, Jojo is forced to spend more time at home with his mother – Rosie (Scarlett Johansson). During his rehabilitation, he collects scrap metal in a robot costume and goes swimming with his imaginary Adolf Hitler. For Jojo, everything is perfectly revolving around the fascist ideology that’s dominating the country. But, unbeknownst to him, the allies are slowing closing in on Germany and, consequently, are threatening to overthrow everything that Jojo reveres. And one night, this is pushed further when Jojo discovers Elsa Korr (Thomasin McKenzie, last seen captivating spectators in Leave No Trace), a young Jewish woman, who has been harboured by his mother in his dead sister’s room. Jojo is then positioned in a convoluted situation where he must begin to neglect his deep-rooted ideology – that Jews are inhuman and have devil horns – for the welfare of his mother and himself.

Jojo Rabbit follows a long line of satirical comedies that deal with Nazi Germany. Whilst many in this subgenre have been hailed (if merely retrospectively) as sardonic masterpieces – Charlie Chaplin’s The Great Dictator, Ernst Lubitsch’s To be or not to be (1942), Mel Brooks’ The Producers (1967) all come to mind – others have been condemned for their tastelessness; the British sitcom Heil Honey I’m Home (1990) was terminated after one episode for its trivialisation of the Second World War. The subgenre is, undeniably a delicate one and any filmmaker that embarks on it, is walking on very thin ice.

Therefore, it is perhaps unsurprising that many, after its world premiere at the 44th Toronto International Film Festival, have bombarded this film with labels of: ‘crass’, ‘disingenuous’ and ‘insensitive’. I don’t, by any means, wish to detract from or ignore neither the countless horrific atrocities nor the evils that pervaded throughout Germany during this period, but I have to disagree with this line of criticism. It’s through its fantastical elements and deliberate, embellished stupidity that this film subverts and condemns fascism in 1930s Germany.  This largely comes in the form of the imaginary Hitler, who speaks in pugnacious anachronisms (“That was intense!”, “Correctamundo!”, “That was a complete bust!”), eats unicorn and is simply illogical – a pointless presence with little beneficial input towards the end (which I’m sure is entirely the point). Is there any harsher way to attack the man and legacy of an individual, who took so much pride in his dignity and rationality? 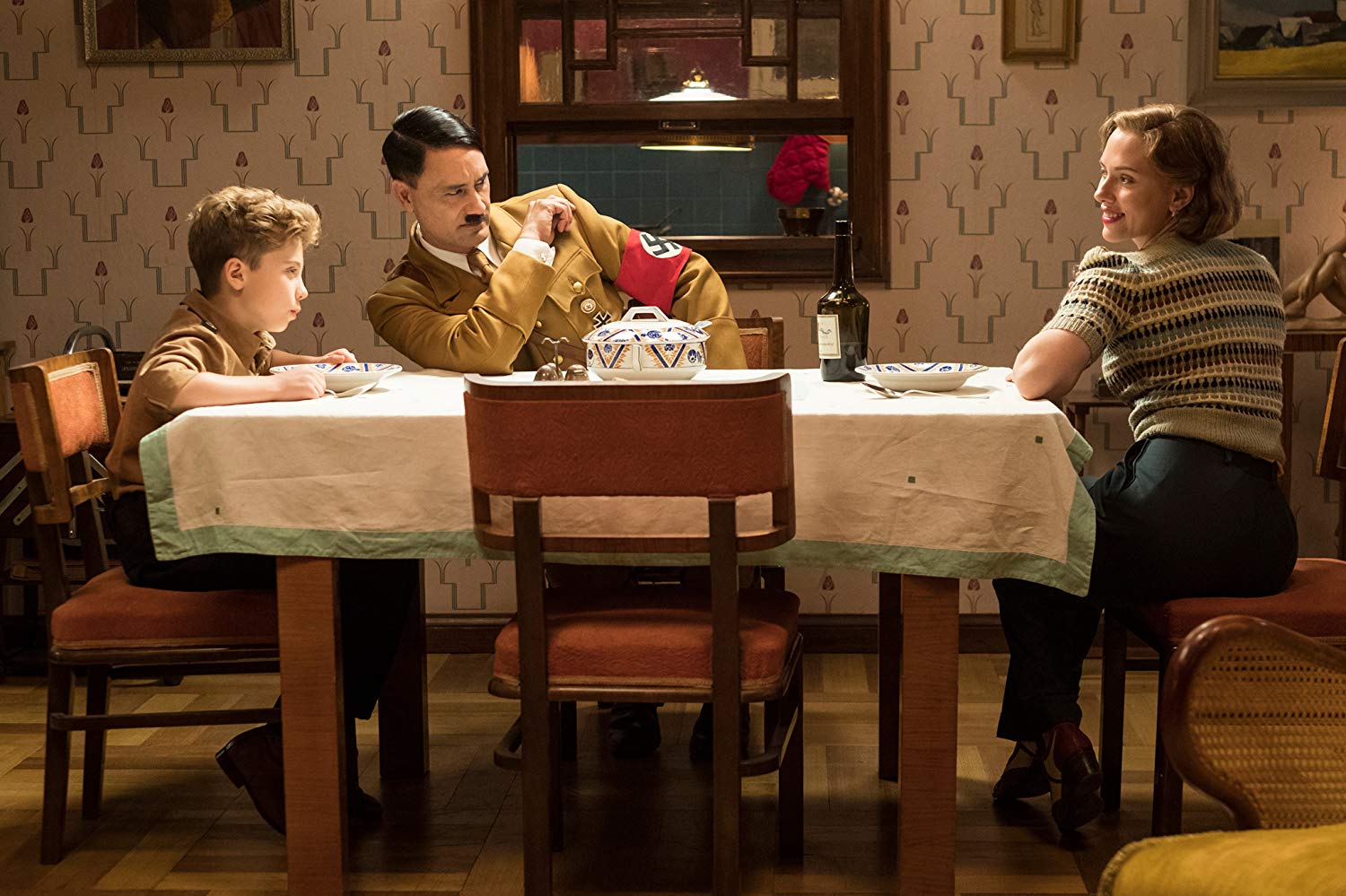 If there is any problem with this film’s tone, it derives from the film’s attempt to establish a sentimental one that’s imbued with drama and, theoretically, meaning.  It never quite hits the heights or complexity it alludes that it could. For instance, neither Johansson’s conflicted mother, who detests the war but allows her son to train with the Nazi’s, nor her missing husband nor her deceased daughter are provided the with space they require to be fully explored. Instead, they all appear as part of the framework that ultimately acts as the basic catalyst for Jojo and Elsa’s friendship.

Nevertheless, the film is bolstered by several great performances.  Griffin Davis manages to perfectly balance the complexity of Jojo’s ideological shift and stands out for his varied emotions throughout the film – confident, shy, stupid and brash. He particularly shines when he’s positioned within the frame with other members of the experienced ensemble – he can aptly provide a compelling performance that repeatedly complements his onscreen counterpart – such as Waititi’s Hitler or the vile Nazis, played by the likes of Sam Rockwell, Stephen Merchant and Rebel Wilson – all of whom are amusing, despite their character’s repulsive beliefs. McKenzie and Johansson both provide nuanced performances that ensure the plot has weight and doesn’t get entirely lost in pure satire. A particular scene involving Johansson, as Rosie, impersonating her husband to reprimand Jojo is perfectly composed, refined and beautifully led by the actress.

Despite society’s present fragility with jokes, as identified by Phillips, Waititi’s Jojo Rabbit proves that even the most complex matter, when handled with care, can be provocative as well as humorous – it verifies that comedy is far from dead.

This genre’s divisive nature means that this film will not appeal to everyone. But, overall, this film’s esteemed cast, newcomer Griffith Davis’ tremendous performance and the script’s supreme ability at mockery makes this a delightful fun (notwithstanding the film’s repugnant context) and if you’re a fan of German shepherd jokes and an imaginary, daft Adolf Hitler who may (worryingly) literally appear from anywhere then this is certainly the film for you.