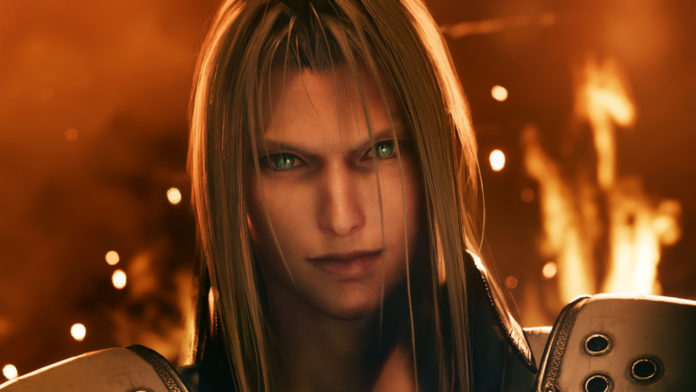 It’s been 23 years since the original Final Fantasy 7, 15 years since the PS3 FF7 tech demo, and 5 years since the first official remake trailer and now, finally, the FF7 Remake has reached international release. So long in the making, the remake stands unquestionably as one of the most anticipated releases of all time, with a lot to live up to.

As someone who played the original all those years ago, I went into this one with jaded expectations. At best, I thought I could get a nice nostalgia trip and see old favorite locations reimagined in 3D, as I anticipated some degree of phoning it in as Square Enix has so often resorted to in recent years.

After some 30 hours, I’m happy to report that I was (mostly) wrong in my fears. The Final Fantasy 7 Remake lives up to the original in most areas, surpasses it in a few, and only occasionally falters. I am, however, very nervous about what could come next, as the game does end on a rather bizarre and unanticipated note.

Going into the FF7 Remake, players need to know that this game only covers the initial Midgar chapter of the original. For the first FF7, this area only accounted for around a fifth of the complete game, if that, which has been a major point of contention. Rather than trying for everything at once, it seems the Square Enix has instead decided to massively expand this first chapter, spending greater time on both character and world-building.

The premise for the beginning of Final Fantasy 7 is that we’re following Cloud, a former high-tier mercenary called a Soldier, as he joins a terrorist cell called Avalanche. Run by his childhood friend Tifa, and gun-armed foul-mouth-with-a-heart-of-gold Barret, Avalanche has decided to bomb power reactors made by a company named Shinra. As these reactors literally turn the lifeblood of the planet into fuel, Avalanche aims to secure the future of their world. 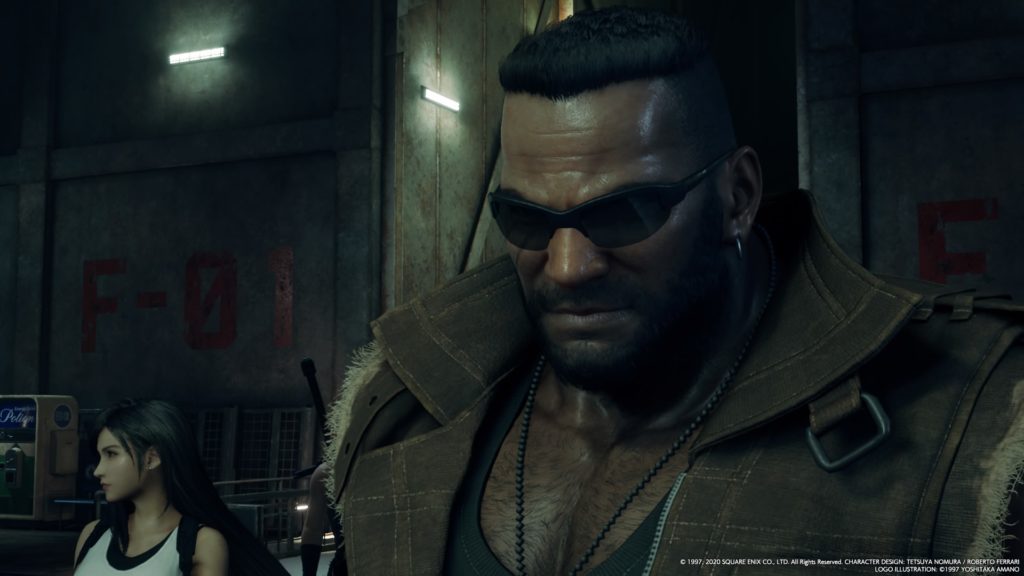 As Shinra’s depravity runs far deeper than even Avalanche could know, not everything goes according to plan. This eventually necessitates the inclusion of the mysterious flower-girl Aerith (formerly Aeris), and a host of side-characters both new and returning.

Despite my original trepidation, there’s remarkably little of what feels like padding in the remake, with additions feeling welcome and well-placed. The side characters of Jessie, Biggs, and Wedge are especially well improved in the remake, as their writing and acting actually made me care about their fates this time around, whereas in the original their inclusions could often be more distracting than engaging. 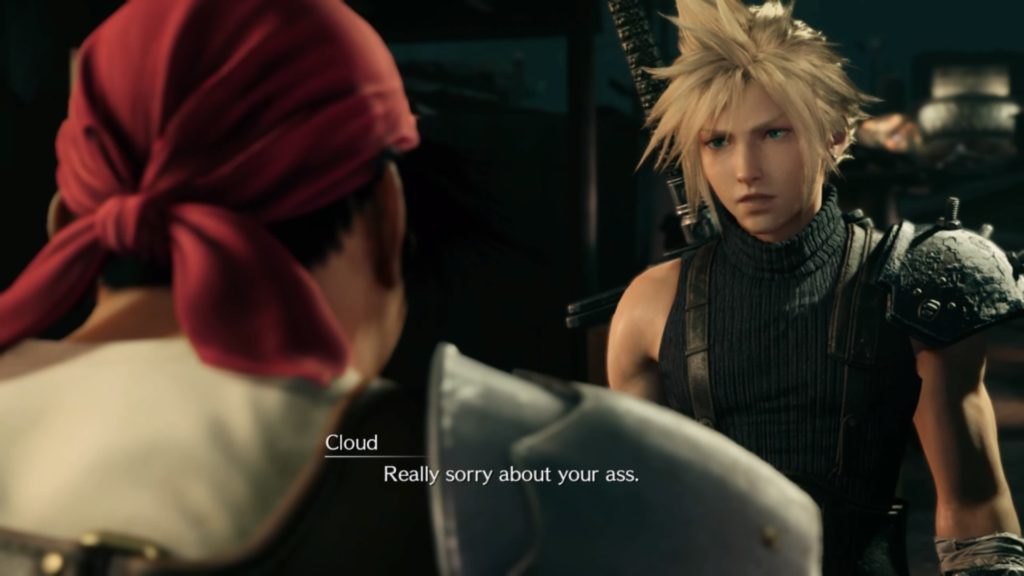 On the main party front, it’s the interplay between the characters which sets this game ahead of the original. With much more time, better graphics and animation, and voice acting to work with, each of the main squad feels far more relatable, all growing on me as the game progressed. The main kudos here has to go the Cloud/Barret relationship, which goes from cold and untrusting to a deep and respectful friendship.

While I won’t spoil it for our readers, the end of the game is where the FF7 Remake seems to go off of the rails. Diverging heavily from the original at this point, the ending included a rather obvious but canonically impossible boss battle, and some other boss fights seemingly out of left-field. I feel how effectively these fights will hold up will depend on what Square Enix does with the other chapters of the game, but at this point, they bring to mind the dreaded ridiculousness that director Tetsuya Nomura delivered to Kingdom Hearts.

That said, the ending did leave me with the impression that I genuinely have no idea what is going to happen next. Not exactly what I wanted in a remake of one of my favorite games, but, provided the writers have a coherent plan and don’t Lost/Game of Thrones things up, it could prove to be a positive thing. 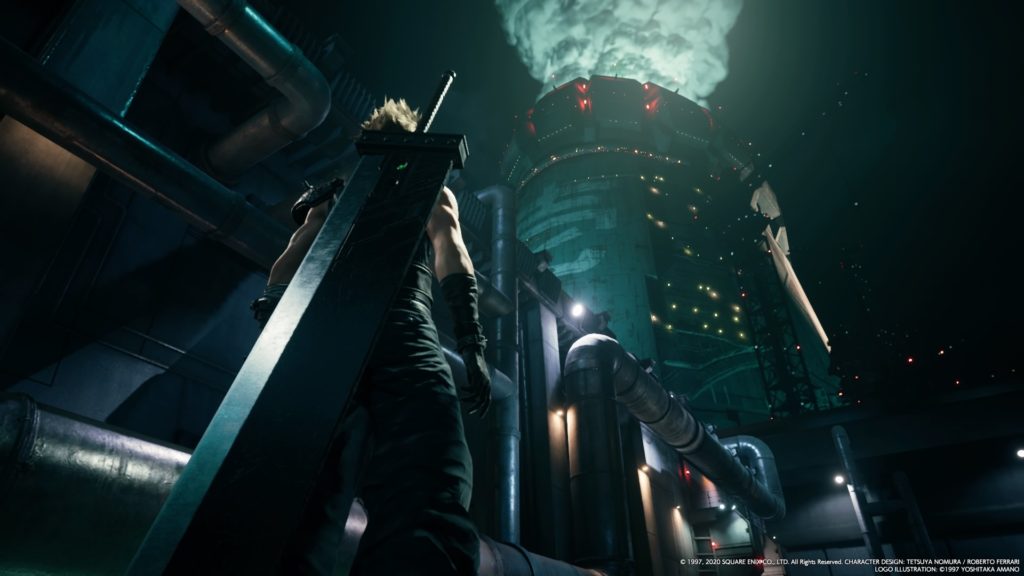 Gameplay within FF7 Remake is split between exploration and combat, with some heavy menu management being thrown in for good RPG measure.

Navigation is the most straightforward aspect, with running, walking, and sprinting being the main traversal options. Context-sensitive actions also appear at various points, such as ladder climbing, jumping, and hanging. These small additions can be a little clunky, but they’re rare enough to never really overstay their welcome

As you might expect, it’s the battle system is where the game starts to show its legs. While starting slow, battles eventually end up as highly tactical, making them far more difficult than the original game’s rather easy main story. The remake still won’t get you stuck if you pay a little attention, but it’s still nice to see a little more challenge throughout the main story missions.

During fights, players are free to take direct control of one of the maximum of three characters in your party. These are the default Cloud, as well as Barret, Tifa, and Aerith. While Red XIII does join towards the end of the game, he is not playable in this entry. All of these characters share the default abilities of attack, dodge, and block, but outside of this their abilities give their playstyles considerable flexibility. 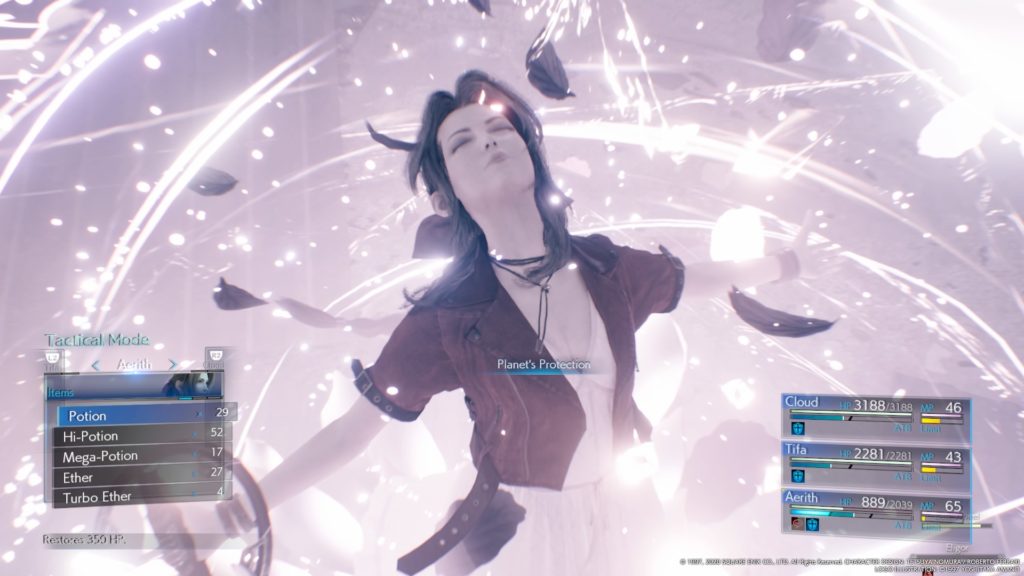 The goal in combat encounters in this game is to simply reduce an enemy’s HP to zero, but this rarely achieved through hit-them-till-they-die tactics. Instead, players are tasked with knocking an enemy off balance and pushing them into a stumbled state. During this state, they will take massively increased damage and not fight back, making it the perfect time to hit them with everything you have. Some attacks build this stagger much faster than others, with big hits, elemental weaknesses, and unique triangle abilities playing the most important parts.

Cloud plays the part of the melee hard-hitter, built around having a lot of different options and going toe to toe with enemies. His triangle ability, Punisher mode, makes him move slowly but hit much harder, and gives him able to counter many melee attacks when blocking. Tifa, the other melee character, is much faster, dodging, getting in quick hits, and finishing combos with her unique martial techniques.

Barret is the slowest character in the game, fighting mostly at long range with his guns. Able to quickly lay down big shots with Overcharge, he is the go-to choice for many flying enemies. Last is Aerith, the magic-slinging flower girl who can charge her unique ability tempest for single powerful blasts.

Aside from these standard unique abilities are Limit Breaks and weapon skills. Limit Breaks are the same Final Fantasy staple they’ve always been, allowing huge special attacks after a certain amount of damage is taken. Weapon skills are gained by equipping new weapons and using the skill. Once mastered, these can be used at any time, and on any other weapon.

The most flexible component of this system is seen through the triumphant return of materia. These little orbs slot into weapons and armor, giving each character a chance to equip certain commands, magic, abilities, and passive boosts. Some of these let you cast simple heal or damage spells, others increase your luck, allow attacks out of dodges, or let your character steal. Summons also return, though these are given a unique slot as to not interfere with other materia placement. 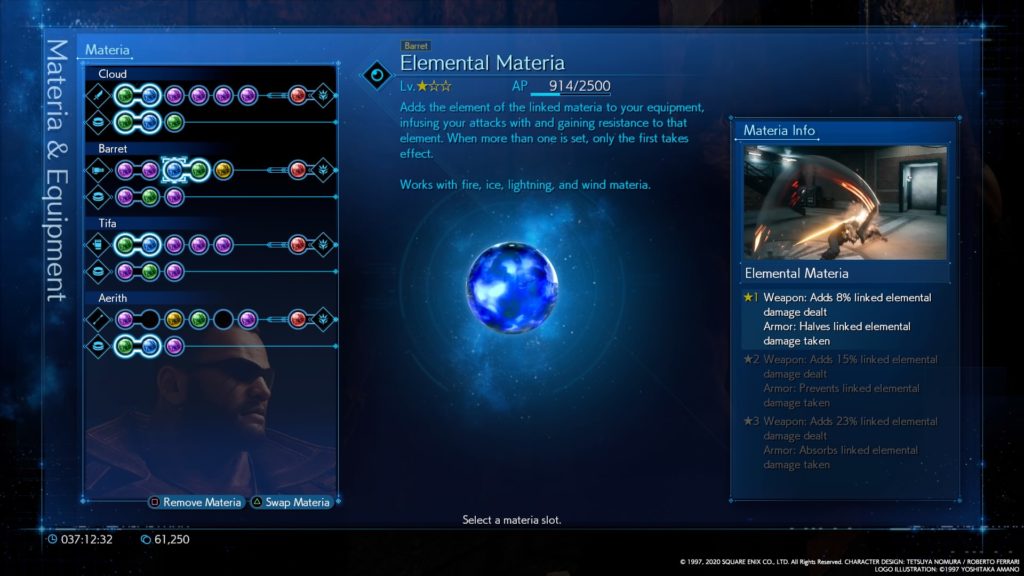 Some materia slots are linked, which gives the ability to merge them into more powerful combinations. One of the most useful in this regard is the elemental materia which, when junctioned next to magic in weapons or armor, will create elemental attacks or defense respectively. Materia, as well as weapon skills, can be set as shortcuts for each character, allowing up to four quick-combinations when that character is under your control.

When the actual battle takes place, most advanced abilities are governed by the returning ATB bar. This will slowly charge up to a maximum of two slots, giving characters the chance to use items, magic, summons, or special abilities, at the cost of one or two bars. Time effectively comes to a crawl while you select abilities for yourself or other members of the team, meaning menu management is simple, even in the endgame.

When you get in the groove of the new battle system towards the middle of the game, it truly begins to stand out as one of the best in the business. Rapidly changing characters to take care of individual threats, making the right choice at the right time, and properly preparing for combat all play a part in what is a fantastic combination of individual elements.

It’s rare to see an RPG making a leap like this, and it’s even rarer to see once succeed so well. Final Fantasy 7 Remake’s battle system isn’t just fun in the context of action RPGs, it’s a great system in its own right, and we can’t wait to see where Square Enix goes with it next.

With this leg of the journey over, we begin the wait for the next part of the story. The idea is that, with the base systems now established, the turnaround for the coming entry should be a lot faster than the development time of the first. How much this will really be the case with both new consoles and COVID-19 playing a part, however, is up for debate.

Regardless of what comes next, the first chapter in the Final Fantasy 7 remake story is one well worth experiencing. An engaging story, great gameplay systems, and fun characters all combine to make a game that you don’t have to be a fan of the original to enjoy. Long-time players of the original might come away with some conflicting feelings, but the return to Midgar is still well worth the trip.