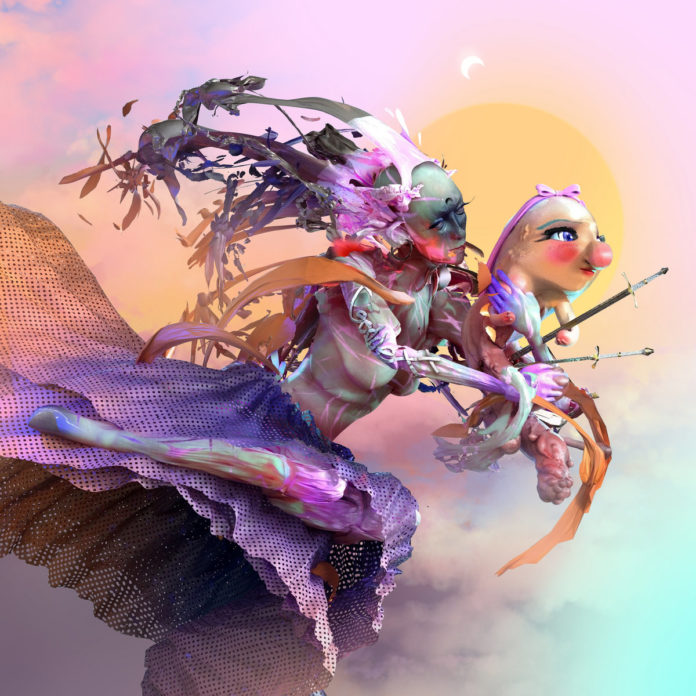 Galen Tipton has had quite a busy year. In addition to dropping a number of one-off collaborations and remixes, the Ohio-based producer also released an EP under the recovery girl moniker back in January, which was then reissued by Orange Milk into a full-length record featuring songs from February’s gross/scratch as well as a handful of remixes. It was, to quote one of the songs’ title, ‘big loud & violent’; a dynamically abrasive collection of glitched-out hyperpop bangers that stitched together elements of experimental pop, hardcore, and electronic music. And with her latest EP, goddexx, Tipton shows no signs of stopping, expanding her already diverse musical palette to deliver her most focused and refined effort yet.

Goddexx is nowhere near as raucous or rough around the edges as recovery girl, nor is it purposefully disjointed like 2019’s fake meat. But while it features some of her most polished production yet, the new release certainly doesn’t compromise on Tipton’s bold artistic vision – it’s still as hyperactive as anything she’s ever produced, stacked with one insanely wonky beat after another and plenty of inventive ideas to get your blood pumping. Though it’s mostly an instrumental album, lacking the hooks and in-your-face vocals that made recovery girl so memorable, it more than makes up for it with its colourful sound design and meticulously crafted song structures.

It also marks Tipton’s most grandly cinematic effort to date, which makes sense when you consider it was intended as “battle music to crush oppressors and dance on their graves” (closer ‘That Was for Luck’ delivers just that, starting off like the soundtrack to a fighting game before morphing into a full-on rave). There’s definitely a sense of empowerment running through Goddexx, which stems from the fact that Tipton wrote it after emerging out of an abusive relationship while also coming into her own identity as a nonbinary trans girl. But where recovery girl had more of a subversive and at times aggressive edge to it, Goddexx feels even more triumphant and rapturous in its display of inner strength, like on the vibrant opener ‘Courageous Grieving’ or the infectiously raunchy ‘Girl Dick’, which has to be the fiercest highlight on the EP.

If you had to pin it down to one genre, Goddexx can probably be best described as deconstructed club music; but Tipton isn’t just taking on that approach simply because it’s becoming more popular, but because its propulsive and vibrant sounds perfectly encapsulate the themes that she’s trying to put forward. For anyone who’s never heard Tipton’s music before, comparisons to Iglooghost and the XYZ collective are inevitable  – but as the artist acknowledged in a tweet, Goddexx pulls from a wide range of artists in the electronic music scene, including producers like Dasychira from the Unseelie collective, through which the EP was released. Those influences come through most prominently in the ominous textures that underlie tracks like the unrelenting ‘Butterfly Drinking Blood’ or the first half of ‘Cry Gold’, steering them towards uncanny valley territory.

But Tipton puts her own spin on whatever style she takes on, infusing it with elements you wouldn’t normally expect in a way that’s both surprisingly coherent and exciting. In the past, a lot of that genre-blending would come in the form of a collaboration, and that synergy was part of what gave Tipton’s previous output its appeal. But Goddexx benefits from being solely written, produced, mixed, and mastered by Tipton herself, thus setting out a singular vision more clearly than any of her other projects. It rightfully claims its own place in today’s flourishing experimental music scene, while also affording her the space to celebrate her own personal victories by showcasing her unique and versatile approach. This might be battle music, but if the abrupt ending of ‘That Was for Luck’ is any indication, the war is far from over – and if the soundtrack to the rest of it is as consistently exalting, that might not be such a bad thing.

EP Review: Galen Tipton, 'goddexx'Galen Tipton has had quite a busy year. In addition to dropping a number of one-off collaborations and remixes, the Ohio-based producer also released an EP under the recovery girl moniker back in January, which was then reissued by Orange Milk into a full-length...