5 Myths the Movies Have Perpetuated About Casinos 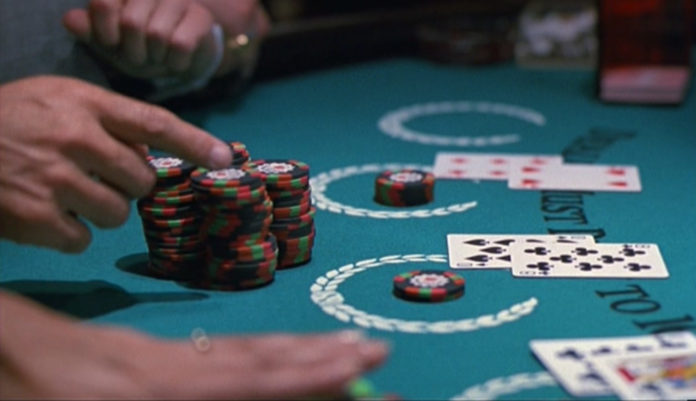 In a sense, the casino is the ultimate movie prop. It can act as a simple way to build tension – think of Martin Campbell’s direction of James Bond in those brilliant Casino Royale poker game scenes. It can also act as a device to build drama, conflict, fun, excitement and just about every other emotion. It’s little wonder that casino scenes pop up so frequently in Hollywood movies.

But the casino scenes in movies also tend to perpetuate myths that don’t happen in real life, and they can imprint that on viewers who believe it to be true. Below we are going to discuss five of the more common myths and explain what the really goes on:

The main culprit here is Dustin Hoffman’s autistic savant, Raymond Babbitt, in Rain Man, but we could also point to Doug (Zack Galifianakis) in The Hangover. While Raymond has the mathematical skills to be a very good card counter; it’s really not that difficult. If you have a look at the blackjack online @MansionCasino, you could come up with a card counting strategy within minutes. It’s really just about keeping track of whether high or low cards have come out of the pack. Card counters also come up with simple systems to help them remember. It’s as easy as learning a phone number. Another thing: Card counting isn’t illegal – far from it. However, it’s not likely to earn you a fortune either. Card counting could tip the balance slightly in your favour, but just enough for you to profit – not win millions.

Winning at Roulette Is Easy

We are basically taking the opposite line to blackjack here, with a big caveat. Winning an even money bet in roulette is very common; you’ve around a 47.4% chance in American roulette, for instance. What we are talking about is the straight-up number, 32 red, for example. The probability is about 2.60%, and yet we see it time and time again in the movies with the big win in an all or nothing situation. This is not indicative of how players usually play the game, nor is it very likely that your number will come up.  Of course, roulette in the movies often shows the fix in play, as we saw with Humphrey Bogart’s Rick in Casablanca. That’s another fallacy.

All Those Big Poker Hands

You will all have seen plenty of royal flush hands pulled out at heart-stopping moments in the movies; Maverick with Mel Gibson is one such film, where the hero (Gibson) pulls out a royal flush to win the prize of $500,000. The odds of the royal flush in this five-card variant are 649,739/1. Not bad, Mel. In addition, two of the other players had a straight flush (72,192/1) and four of a kind (4,165/1). Again, the film doesn’t reflect the realities of poker play – professional poker players might spend their entire lives playing and not get those types of hands. It doesn’t stop them from winning millions, however.

The Hot and Cold Tables

In The Cooler, William H. Macy plays a downtrodden schmuck who is employed by a casino as “a cooler”; basically, someone who is so unlucky that they only have to approach other people and touch the table to make them lose. Of course, this is nonsense, and few movie-goers would believe that casinos employ these type of people. But it taps into the whole idea of superstition, lucky numbers, hot and cold games, and so on. What we are dealing with at the casino is pure random chance – nothing else. The movie-makers tend to lean on this to romanticise the casino, which is fair enough.

The Debauchery and Anything Goes

Perhaps this is a little more about the concept of Sin City than the casinos alone. But, by and large, casinos are quite serious places, and it’s not recommended that you visit one when you are hammered. Most likely, you’ll not get in through the door. Copious drug use? Forget about it. Getting caught with drugs in Nevada can lead to a long prison sentence. If you wrecked your hotel room – The Hangover, Fear and Loathing in Las Vegas – you would expect the hotel to phone the police straight away. Of course, there is some hedonism in casinos – they are supposed to be fun. But if you ever visit one, you will see that the drug and alcohol-fuelled folks tend to stand out like sore thumbs.