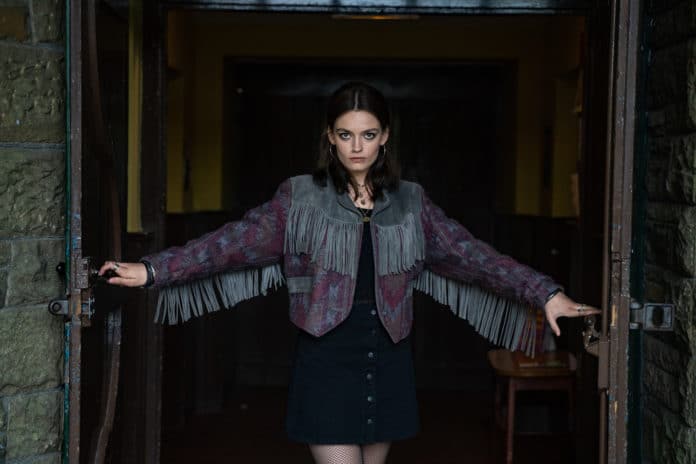 Sex Education is Netflix’s hit comedy series created by British-Australian Laurie Nunn. The show is primarily a comedy, but the story is heartfelt and empowering. Asa Butterfield stars as Otis Milburn, the son of a sex therapist, Jean Milburn (Gillian Anderson). Otis’s bubbly best friend Eric (Ncuti Gatwa) balances out his introverted awkwardness, but when resident genius Maeve Wiley (Emma Mackey) proposes they start a sex therapy clinic at school, Otis is pushed out of his comfort zone.

Most episodes are framed by Otis and Maeve’s clients and their respective issues, which makes even the side characters feel fleshed out and well-rounded. These side characters often complete mini character arcs within a single episode, while the main characters continue to grow and evolve throughout the series. Some – like Otis, Eric, and Jean – seem to still have a long way to go before truly changing at their cores. Others have already developed significantly in the show’s first two seasons.

Adam is the son of Moordale Secondary’s Headmaster, Michael Groff. After being assigned to work on a class project together, Adam discovers all of Jean’s “weird sex sh**” in Otis’s house. The next day, Otis is humiliated when a video of his mum is circulated at school. Otis tracks Adam down, but he’s having problems of his own.

Adam has been having trouble with his girlfriend Aimee, largely because he feels too much pressure. He admits to Otis that it’s hard being the Headmaster’s son and living up to the rumors about him. Otis helps Adam take ownership of his identity, but that doesn’t stop Adam from bullying Eric in the hallways.

Later in the season, Adam realizes he’s attracted to Eric when they have detention together. Still, he continues to treat Eric poorly in public and is unable to show him affection because he’s ashamed of his sexuality.

In season 2, Mr. Groff sends Adam away to a military school, where he’s wrongly expelled after protecting a gay couple. He returns to Moordale a changed man, hoping to make amends with Eric, who already has a boyfriend. At home, Adam tries to please his dad, but Mr. Groff finds ways to belittle Adam every chance he gets.

Adam finds small successes at work, where he befriends Otis’s girlfriend Ola. She helps him accept that sexuality is fluid, and he listens to her problems and helps her express her anger safely. By the end of the season, after getting some advice from his mum, Adam decides to prove that he’s brave enough to love Eric, and he proclaims his feelings in front of the entire school – including his father.

Aimee Gibbs is introduced as shallow, slightly frivolous, and not very bright. Nevertheless, she’s Maeve’s best friend, though the two keep their friendship a secret from Aimee’s clique, “the Untouchables”. Throughout the first season, Aimee realizes that the Untouchables don’t have her best interests at heart and that it’s Maeve who truly cares about her. Even though Maeve doesn’t have the best reputation around school, Aimee publicly ditches her old clique to hang out with Maeve.

In season 2, Aimee spends most of her time with Maeve and her first steady boyfriend, Steve. Though they’re two of Moordale’s top academic performers, they love and support Aimee wholeheartedly. Aimee makes a cake for Maeve’s birthday after deciding she’s going to be a baker. She’s on her way to school with the cake when a man assaults her on the bus. Maeve insists that they report the incident, though Aimee doesn’t want to make a fuss.

It’s only later that the experience starts to make an impact on Aimee. She stops taking the bus and making physical contact with Steve. When the girls (Aimee, Maeve, Olivia, Viv, Ola, and Lily) get detention after being wrongfully accused of slandering a female teacher, Maeve and Ola start bickering until Aimee shuts them up. She finally admits that she’s been struggling in the wake of the assault, and the girls all share their experiences of being harassed by males.

Surrounded by her supportive friends, Aimee is able to gather the courage to speak about her experience. The girls then go to a scrapyard and let their anger out by smashing old junk. They cheer for Aimee in what is one of the most empowering moments of the series. The next day, they all meet Aimee at the bus stop and board it with her. Later, Aimee tells Steve about what happened and accepts his emotional support.

Maeve is one of Moordale’s top academic performers, but she’s not ready to own her achievements in season 1. She mostly keeps her head down, makes fun of the school curriculum, and writes other people’s papers for extra cash. But when Adam receives the credit for an essay she wrote for him, Otis encourages her to take what she deserves – in this case, the trophy prize. He leaves it in her trailer at the end of the season, which inspires Maeve to be braver.

In season 2, she accepts Miss Sands’s invitation to become a member of the Moordale Aptitude Scheme, a class for bright students who are looking for more ways to ensure college acceptances. Maeve also joins the Moordale Quiz Heads, but sabotages her own place on the team several times. Miss Sands is the one to encourage her to keep going, especially after Maeve is too afraid to read out an essay about where she sees herself in a few years’ time. Coming from a financially disadvantaged background and having no family around, Maeve’s dreams are simply to have a house with windows and chairs so that she doesn’t feel so lonely.

Miss Sands tells her she could do a lot better than that, but Maeve still struggles not to feel like a disappointment, especially when her mum returns to Moordale, a young toddler in tow. Maeve slowly begins opening up to her, but when she finds drugs in her possession, she has no choice but to call Child Services. Preoccupied, Maeve doesn’t perform to her best abilities for the Quiz Heads, leaving her feeling like a failure. Otis, Aimee, and Miss Sands are always there to remind Maeve how capable she is, but in the end, it’s Maeve who decides which direction her life will take.

She knows that reporting her mother is the right thing, even if she feels horrible about it in the moment. She also knows that she should put herself first, so she decides to stop worrying so much about boys, whether it be Jackson, Otis, or potentially her new neighbour Isaac. Instead, Maeve pours her energy into her studies and her friendship with the girls.

Jackson is Moordale Secondary’s newest Head Boy, a star athlete, motivated, ambitious, creative, and academic. He’s also casually sleeping with Maeve, at first wishing to keep their relationship a secret, then changing his mind and expressing his desire to date her. She’s elusive, so Jackson asks Otis for advice and does exactly the opposite of what Maeve would ever want from a potential romantic partner: he makes a grand gesture. He sings Billy Ocean’s “Love Really Hurts Without You” in front of their classmates. At first, Maeve is embarrassed, but she soon gives in.

Maeve still has her reservations, but Jackson isn’t aware of this. He’s grappling with other issues, like the pressure he feels from his mother to perform well at swimming. He latches on to Maeve and her brother Sean. Though he’s dependent on them, especially Maeve, the relationship is mostly a healthy and positive one. They support each other and are matched in intellect and maturity, which can’t be said of Otis and Maeve at this stage. It’s clear that Maeve doesn’t love Jackson as much as he loves her, and she didn’t even want a boyfriend to begin with. Viewers can see it from a while away, but Jackson is shocked when their relationship falls apart.

He’s heartbroken for the first time in his life and isn’t really himself anymore. Even so, he does everything he can to ensure Maeve isn’t expelled from Moordale after Mr. Groff finds her brother’s drugs at the school dance. In season 2, Jackson continues feeling anxiety surrounding swimming. He even injures himself to get out of training for a while, during which time he makes a new friend and finds a new hobby.

His new tutor, Viv, quickly becomes his friend, and she’s unlike anyone else in his life. She’s supportive, frank, and incredibly smart. She helps Jackson prepare for his role as Romeo in the school musical and encourages him to tell his mother how he feels about swimming. When he harms himself a second time, Viv is the one to go to his moms and report his behavior. Of course, Jackson is angry at her in the moment, but it’s the right thing to do. It helps Jackson be honest with his mother and rebuild their mother-son relationship. Jackson also comes around to Viv and their friendship becomes purer, free of the transactional dynamic on which it’s first established.

Maureen is one of the unsung heroes in Sex Education. In season 1, she’s rarely seen, but the storyline in season 2 allows her more room to be. She finally asserts her autonomy in her marriage, informing Michael that she wants a divorce. In season 1, she’s a bystander to his bullying of Adam, but in season 2, she defends her son and takes him under her wing. She gives him inspiring and invaluable advice that Adam takes in stride, having just learned the same lessons herself.

Importantly, Maureen branches out and finds a friend in Jean Milburn, who works at the school in season 2. She finally gains the courage to talk to Jean about her personal troubles, both sexual and marital. The two women find that they enjoy each other’s company outside of therapy, and their adventures together are some of the most empowering moments of the series so far.

Maureen takes ownership of her life and control of her destiny in season 2, which embodies what most of the characters are trying to do. Hopefully, her journey of growth will continue into season 3, when Michael will no longer be living with her and Adam.