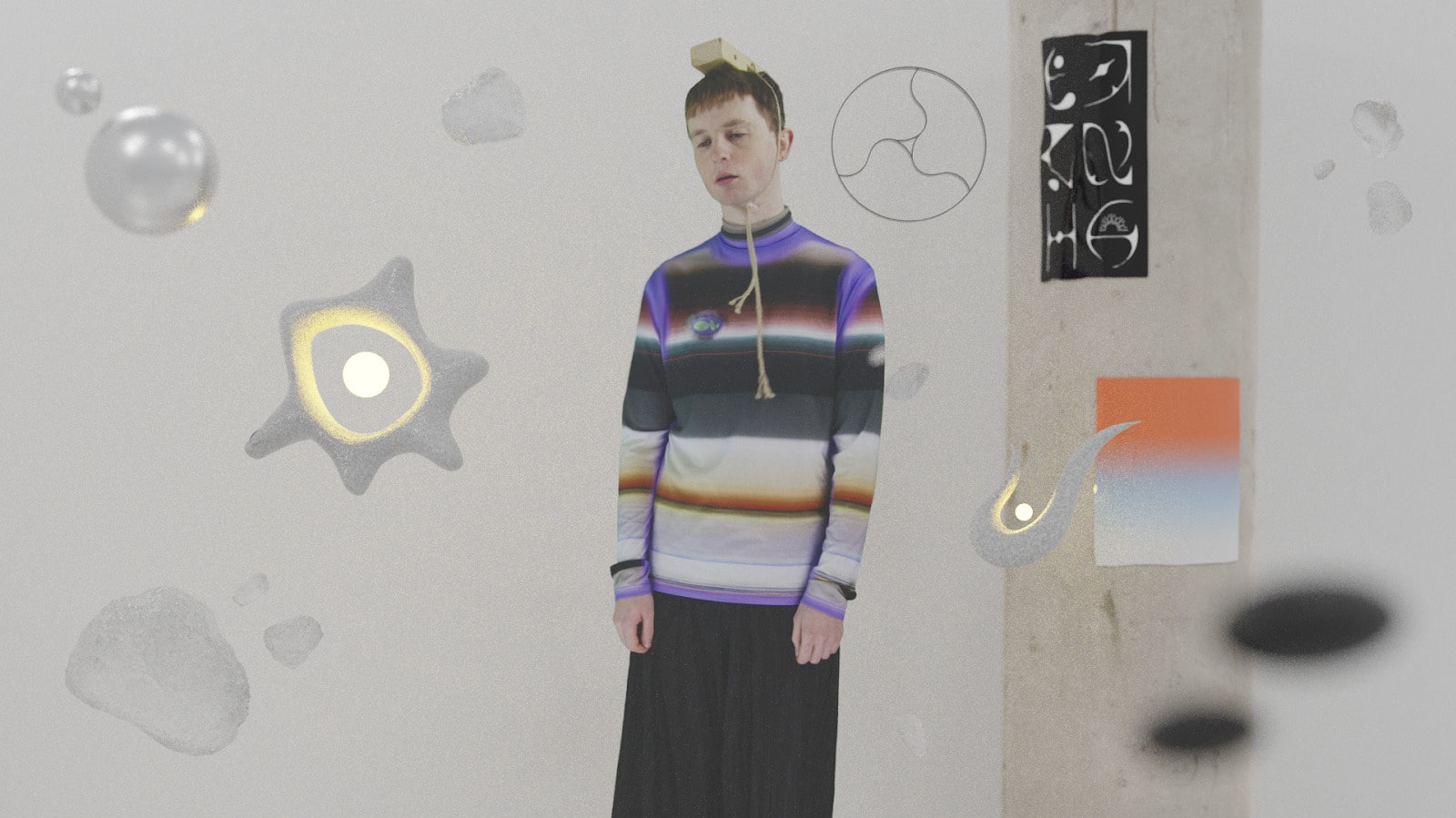 Neō Wax Bloom, the breakthrough debut LP from Dorset electronic producer Seamus Malliagh aka Iglooghost, felt like a portal to a world as endlessly fascinating as it was complex and bewildering. Since releasing that album in 2017, the prolific musician has been steadily expanding the audiovisual universe permeating his work, dropping two EPs, Clear Tamei and Steel Mogu, the following year, and teaming up with Kai Whiston and BABii as GLOO for the 2019 collaborative project XYZ.

The shifting landscape on his recently released sophomore album, Lei Line Eon, serves as further proof that Iglooghost refuses to paint himself into a corner; softening the more frantic, maximalist edges of his debut while enhancing its world-building ambitions. Dipped in melancholy hues but bursting with wondrous, engrossing arrangements, the album is once again steeped in extensive lore, inspired by studying his “hometown’s secretive tradition of Lei Music – a mysterious subgenre that summons floating lifeforms,” as he put it in a statement. There’s even an entire website dedicated to his findings for the Glyph Institute, and the music is rendered with the kind of imaginative detail and playful elegance that feels both distinctly hypermodern and completely alien.

Listen to the album and read our track-by-track Q&A with Iglooghost below.

Right from the start, there’s a neo-classical influence coming from the twinkling piano arpeggios and haunting string arrangements from Vivek Menon. Why did this feel like a fitting introduction to the world of Lei Line Eon?

So Eœ (Disk•Initiate) was the first demo piece of Lei Music that I managed to compose on ‘Glyph Suite’ – a special software that I developed with my research institute. It summoned a big unstable entity that smashed my studio up which is why it ends kinda abruptly – but I knew it needed to open the LP up. I think it’s the first time I figured out how to finally marry together all these disparate ideas, which was the most exciting moment ever – and that feeling of exhilaration is always gonna be embedded into the ‘drop’ to me. I was just fuckin losing my shit & headbanging to these blissed out walls of big ass chords & jittering beams of zaps.

You’ve described the album as “modern laptop-based Lei Music.” How did you go about integrating the musical tradition of this mysterious subculture that you’ve been exploring into a more contemporary context, as on this track, as well as blending neo-classical elements with electronic sounds?

For this song I wanted to make something that sounded like being battered with 100mp/h winds & jumping up + down in a high-altitude muddy valley. This song is a big winding flyover of the terrain & landscape of the album. ‘Pure Grey Circle’ is a mad one to listen back to because it has vestigial remnants of like 3 different WIP tracklists of the album. It’s kinda like an archeological dig, with different substrates being from different eras of the album’s birth. It literally goes from oldest to newest – with the big burst of Vivek’s violin at the end being the newest part.

The poetry here is truly evocative and adds to the ominous atmosphere of the track, which as you’ve written in the Glyph Institute Research Papers is about the “organic satellite-like beings called Celles.” How did you approach the lyric-writing process in contrast to those papers?

Aw thanks! I was nervous as shit about having my own vocals on the album but now I’m excited to play this one live and jump around. ‘Sylph Fossil’ to me is this abyssal, lumbering brute of a track that’s kind of supposed to sound nauseous and frightening but also brave. In Lei Music’s traditions, the beings that are summoned aren’t always benevolent and sweet – I think they’re often unpredictable and unclear in intention. ‘Sylph Fossil’ is about tar-like inkblot beings morphing and shrinking into different formations like a rorschach algorithm, and the onlooker trying to ascertain a stupid/simple interpretation of the beings’ mood. To me, it’s about how people can’t help but project personified traits onto the unknown.

How did the collaboration with LOLA come about, and what was it like working with her?

LOLA is a madman – since last year she’s only got a handful of tracks out but ‘Wingless’ is one of my fav songs I’ve ever heard. I think the imagery she paints in ‘Light Gutter; makes me imagine a big crumbling mossy well. Structurally I was trying to develop a track that initially sounds like it’s wading through a super heavy & thick void – with all the percussion sputtering slowly within the viscosity of it all. I wanted it to build up like it’s about to ‘drop’ – but then the gravity goes straight to 0 and the piece starts lifting off like a big organic weightless hot air balloon when all the strings come in.

You recently released the music video for ‘Big Protector’, which you directed, animated, and edited yourself and documents the expedition you took to “establish some kind of communication with the Celles.” Did you already have a visual journey in mind while producing the song, and what were some of the challenges of capturing the essence of those strange drones both visually and sonically?

That piece was largely improvised & was probably the fastest I ever made a track (shit usually takes months.) I think it’s easy to let software strongarm you into making 4/4 quantized/syncopated music, and it’s really technically awkward to work outside of those boundaries – but for some reason something kinda clicked for this one. It was so fun to just let each zip and thud boing off of the preceding move… have shit fly up + down in tempo & drift off the grid. This song is an exploration inside the body of a being called a Celle. It’s kinda unclear whether or not they’re ‘lifeforms’ – they sorta act like big drones or satellites with extremely complex biology.

BABii has been a longtime collaborator of yours – what made this collaboration different and unique?

BABii is a weaved into so many spots in the album & kinda works like a guiding light to help people journey through the bewildering parts. She is more powerful than people know but I think it’s finally becoming clear now. She made these enormous glowing instruments that you see in the ‘Big Protector’ video, turning my shitty blueprints into enormous otherworldy technology. ‘UI Birth’ is all about genomes & hexicedimal code. When I was a kid I would download ROMs and change random digits in the hex codes and play them on my DS to see if it’s fucked with the game’s contents. I was kinda intrigued by how this super vulnerable string of numbers could create such a seemingly rich breathing world in the games (which in reality was just numbers and tricks.) I guess it extends to real life with genomes and atomic structures – which is funny cus it makes everything feel so arbitrary and lifeless. ‘UI Birth; is like a musing on Lei Music and how people are constantly searching for meaning by shuffling instrumentation arrangements and notes – trying to trigger specifically designed summons.

Much of the album is marked by a shift to more meditative, minimalist soundscapes, but this track stands out as one of the densest and most abrasive on the LP – from the unsettling noise that creeps out of the mix to the way all the different vocal layers come together. What was the process of combining all these different elements?

This one is a creaker. A squeaking clunker. I was feeling restless and impatient + wanted to clench my laptop & shake it violently so all the sounds / components would tumble out and arrange themselves. The zones you can’t see are the places nobody’s looking at but are silently transferring energy in complex visceral systems. Water droplets being pushed between soil by gravity in an abandoned potato patch – or spiky diatoms reproducing in a puddle that nobody will ever even look at. In this case I was imagining what the Lei entities are doing when they’re not being summoned. They’re only ever seen in the context of Lei Music, but I was wondering what context they exist in usually. I like the idea of violent, inhospitable, complex worlds that will probably never be seen by anything living. Sorry I went off topic, this song is cool though and I like it.

This was the first teaser you dropped from the album. How immersed were you in the lore of Lei Music when the track was first conceived? And what was it like recording with Pie Factory Music’s children’s choir?

It was the best – we recorded some stuff over the span of like a month and by the last session all the kids were going crazy freestyling made up languages & alien noises. I think of this song as a myth about another zone entirely – it’s an ancient hymn that people have tried to re-interpret with Lei Music.

This track definitely fits into the overall flow of the album, but is also one of the slower, more patiently-unfolding cuts. It makes me wonder how you approached the sense of progression and build-up on the album in comparison to your previous projects.

This song is for the 4AM crew… I think it sounds cool to listen to on a walk where you shouldn’t go. Creeping through a slate mine or something. To me this song makes me think about Lei Music in its primordial form before it even had a name. it makes me think about all the subgenres of music in history that are unrecorded & lost in time, buried under miles of soil & granite.

At the end of the album, you’re left with a sense of awe at the richness and detail that has gone into the project, but so much is still up to the listener’s imagination. How conscious are you about achieving that balance of building intricate worlds while allowing for active interpretation and engagement?

I want this album to be malleable & represent anything the listener wants it to for sure. To me it has objective meaning, but it’s only as relevant as the next person’s made-up storyline. I think it’s crazy aspect of music that it’s so malleable & interpretive – whereas film & books for the most part guide people through a fairly pre-defined series of events. Neither approach is objectively better, but I definitely really love getting messages of people explaining their vivid interpretations of these songs that are completely different to my own daydreams. Sometimes other people’s daydreams might even leak into the imagery into my head & kinda cross pollenate – that’s fucking crazy really. I’m not really a magical ‘illogical’ thinker but to me it feels borderline psychic. So sick.

Iglooghost’s Lei Line Eon is out now via GLOO.