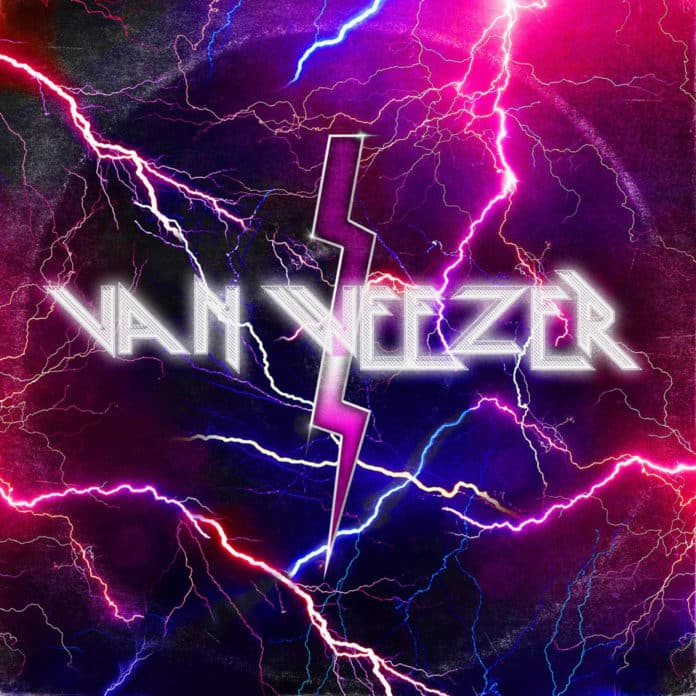 What is there left to say about the much-maligned Weezer? Their new album, Van Weezer, is their 15th album after all, and their second this year following January’s OK Human. In the public’s mind, they’ve arguably overtaken Nickelback as the ultimate ‘Band As Meme’, certainly aided by the rise of TikTok. It is, put another way, a long way since their glory days of 1994’s Blue Album and 1996’s Pinkerton. Yet something keeps bringing people back: a cursory glance at the streaming numbers for this new album astoundingly shows over 10 million plays for two of the tracks; of the rest, only 1 comes under 300,000. Fans, clearly, keep returning in the vain hope that glory will come back.

It’s the glory that kills you though. Ostensibly inspired by 80s’ hard rock and metal, this is an unsubtle creation from Rivers Cuomo and company (just look at that Van Halen-ripped album title). The mammoth riff from Ozzy Osbourne’s ‘Crazy Train’ is directly used in ‘Blue Dream’; Aerosmith is namechecked in ‘I Need Some of That’. The closest they come to matching the late, great Eddie Van Halen is on the stadium rock track ‘The End Of the Game’. Most of the rhythm still belongs to power pop, however, and this is where the band perform best, particularly on ‘Sheila Can Do It’, the exuberant and confident ‘Hero’, and ‘All the Good Ones’, the latter recalling ‘Beverly Hills’ in its pounding anthemic quality.

Aside from one – again unsubtle – portrait of a troubled prostitute in ‘1 More Hit’, Cuomo’s lyrics are, strangely, ‘youthful’. Tracks like ‘I Need Some of That’, ‘All the Good Ones’, and ‘She Needs Me’ roar with unrestrained teenage fervour, slightly off-putting being performed by a man who turns 51 next month. “Who needs real estate when I got you?/ You’re my platinum blonde / With your spandex on,” he sings in ‘Precious Metal Girl’, and much of the lyrics are, pure and simply, lustful like this.

And this is the thing: Cuomo really doesn’t seem to care. 30 years into their career, Van Weezer has the air of a group of muso dads, looking for a mid-life outlet that doesn’t involve buying a motorcycle, getting their teenage rock band back together in the garage on weekends. As such, it’s difficult to disparage the record too much, for much of it is joyous and geeky and fun. It’s not going to stop the memes, it’s not going to stop their seemingly never-ending downward spiral. As he sings in ‘Hero’, “On the inside, I’m an outcast”: it’s a role that Cuomo seems content to keep playing, probably for another 15 albums.

Album Review: Weezer, 'Van Weezer'What is there left to say about the much-maligned Weezer? Their new album, Van Weezer, is their 15th album after all, and their second this year following January's OK Human. In the public’s mind, they’ve arguably overtaken Nickelback as the ultimate ‘Band As Meme’,...