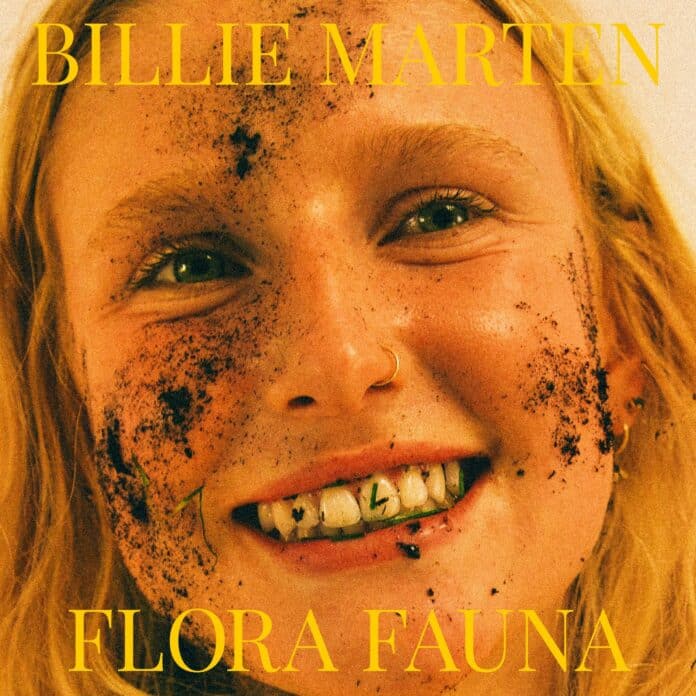 “I just became too blue to function,” admits Billie Marten, opening up about losing her sense of self following the release of her sophomore album Feeding Seahorses by Hand in 2019. Her new record, then, is testament to a recovery and rediscovery of identity. On Flora Fauna, the indie folk artist delicately renounces the modest songwriting that had branded her as “soft” and welcomes a period of lyrical and instrumental experimentation. Much of the darker, crisper sound that Flora Fauna accommodates can be accredited to Marten’s drunken purchase of a bass, which serves as the backbone of her new music. A sense of freedom and unrestrained growth permeates the record, perhaps the result of Marten leaving Sony and surrounding herself with a management team that brings her comfort alongside creative collaboration. It’s invigorating to witness the singer’s sharper, more assertive side on the polished LP.

Social commentary is cleverly woven into the half-hour album, starting with the opening track ‘Garden of Eden’. The instrumentals are immediately striking, brimming with a stern and dangerous energy, not least thanks to the infiltrating bass. The intensity and sense of anticipation ingrained in the verses mirror the track’s critical assessment of hustle culture and modern competitiveness without stopping to smell the roses: “Competition for the space/ Nature of the human race.” The plucked guitar strings transform into joyous chords, though, as Marten’s voice slides into a breezy, uplifting chorus, introducing the listener to an underlying truth: there is little predetermined about Flaura Fauna.

On her standout track ‘Human Replacement’, Marten channels her anger at the world again, regretting the universal fear women feel in public spaces at night – a topic tragically relevant in the aftermath of Sarah Everard’s death. “You’re just not safe in the evening,” she laments, with drums feeding the punchy sound. Reclamation of space is central to the song, however, as we’re urged to “picture a fix” to the overwhelming problem with guidance from the accompanying music video, in which Marten uses a tank to commute to the grocery store, purchasing milk clad in heavy combat gear. The subtle power of the song is augmented by these visuals, creating a charmingly ridiculous caricature of our patriarchal society.

Elsewhere, ‘Liquid Love’ sees the artist take a breather from weighty critique, with the opening noises, reminiscent of an old-school video game, forecasting a lighthearted tone. Looped vocals and synth cocoon the listener in a delightful tipsiness and, sprinkled with Marten’s hypnotic vocals, the track feels close to cleansing. A decidedly upbeat sound is similarly drawn out on ‘Ruin’, with the simple strumming pattern complementing the major key and translating into a plodding, country-like piece. The careless tone slowly draws you in, only for the chorus to surprise with a denser guitar riff and darker lyrics. “Oh, God, a natural fight/ Give me a garden mind,” Marten begs, hoping to repel the intrusive thoughts that visit her, aware they serve only as stifling instruments in her personal journey.

The singer spells out her discontent with an increasingly commercialised and materialistic world on ‘Pigeon’, disclosing in silky tones: “I am sick of branding and one legged pigeons/ They have no ideas to our sour position/ Another day on modern Earth.” It is this track that encapsulates the idea at the heart of the album: an urgency to flee the suffocating requirements imposed on us by an unforgiving capitalist world and re-evaluate our fundamental values. Perhaps paradoxically, given the fatigue and anger at the roots of the piece, its soothing harmonies and minimal production provide a hovering sense of comfort.

Marten shrewdly juxtaposes demoralising city life with enchanting natural imagery throughout the album. Playful strings enrich the harmonised hums in ‘Kill the Clown’ as the artist grapples with exhausting routines, chanting, “After all, I ​am not a baby doll/ I’ve got bills to pay and they never go away.” It all comes full circle on ‘Aquarium’, in which Marten speaks of gardens as a place where she is “cradled from the chaos,” elegantly echoing the longing for a “garden of eternal sunshine” in the opening track. The gentle maracas and guitar keep the dreamy if slightly poorly enunciated vocals afloat, feeding the traces of nostalgia and pain laid bare in the song. An honest depiction of dependency and a yearning for connection, ‘Aquarium’ gently rounds off the album.

Maintaining the staple minimalism that magnetically drew in her early listeners, this collection of songs seems to be more alive, as Billie Marten confidently ventures into new territory rooted in bulkier instrumentals and a sense of excitement. Demonstrating that power and tenderness are not mutually exclusive, her evolved sound on Flora Fauna is witness to the artist’s retrieved lust for life, hinting at a promising, colourful musical future.

Album Review: Billie Marten, 'Flora Fauna'“I just became too blue to function,” admits Billie Marten, opening up about losing her sense of self following the release of her sophomore album Feeding Seahorses by Hand in 2019. Her new record, then, is testament to a recovery and rediscovery of identity....