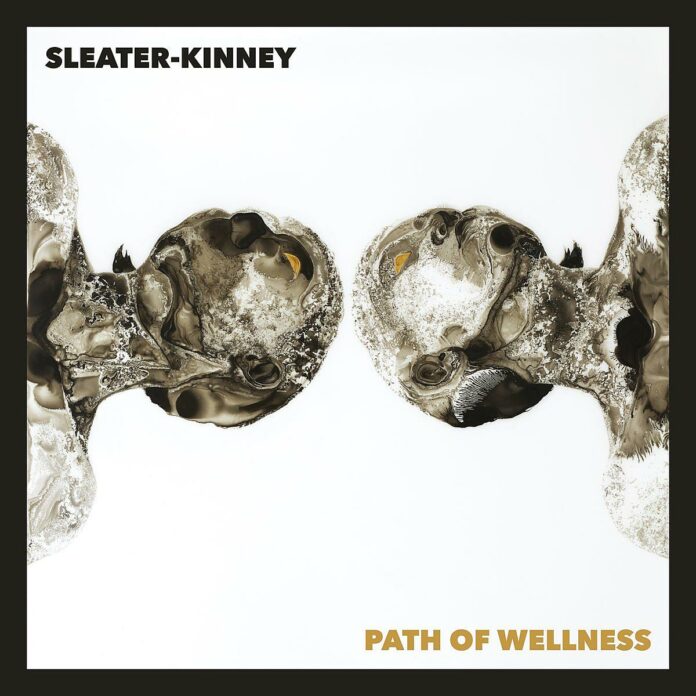 Sleater-Kinney have always been pretty direct with their album titles, but The Center Won’t Hold was more telling than most. The phrase encapsulated the uneasy tension at the heart of the title track to the band’s St. Vincent-produced 2019 effort, an industrial, experimental cut that stood out as the opener for the record. But it was also indicative of the general direction of the album, a messy attempt at matching the band’s immediacy with left-field pop production that too often ended up feeling discordant and unsure of itself. There was no center holding it all together, but in more awkward than interesting ways. Two years later comes Path of Wellness, whose own announcement and accompanying single felt thematically charged more than anything, hinting at a back-to-basics, straightforward rock approach that would chart the band’s search for hope and comfort. It would offer what Sleater-Kinney seemed to have lost on The Center Won’t Hold, something no fan ever truly expected from them: reliability.

Lyrically, the band – now the duo of Carrie Brownstein and Corin Tucker after the departure of drummer Janet Weiss in 2019 – are smart enough to undercut this narrative on one of the album’s most satirical, self-referencing tracks. “You come here for security/ You come here for consistency/ And we’re here to serve you dinner/ Without using any knives,” they sing on ‘No Knives’, and the message cuts deep. But as a whole, Path of Wellness simply lacks the sharp, incisive songwriting that Sleater-Kinney built their name on, and when they do deliver it, there’s less of a bite to the instrumentation for it to really shine through. Compared to The Center Won’t Hold, which felt cluttered but was at least bold enough to try and push their sound forward, the new album seems to revert back to the simple pleasures of their excellent 2015 reunion album No Cities to Love while anchoring in the solid structures of 1999’s The Hot Rock. But there’s just not enough moments of pure impact and dynamism for it to stand on the same level.

Part of it comes down to how things sound. In addition to it being their first album without Weiss since 1996, Path of Wellness is also Sleater-Kinney’s first self-produced album, with Brownstein and Tucker enlisting local Portland musicians to complete their vision. Instead of finding a replacement for Weiss, they got three different drummers to play on the album, including touring member Angie Boylan. Weiss’ absence can certainly be felt, but none of the musicians do a bad job here, and it’s useless pointing out what she might have brought to the table. The larger problem is that there’s less of a vision to bring to life, and at times the pair seems to be aimlessly trying to tap into what they’ve always done well without paying much attention to what’s in front of them. ‘Tomorrow’s Grave’ is one of the album’s most interesting tracks, but the guitar solo towards the end sounds flavorless at best and amateurish at worst, just ambling through.

It’s clear Sleater-Kinney haven’t lost the spark that makes them one of the greatest bands of the past few decades. If this were your introduction to Sleater-Kinney, Corin Tucker’s powerful voice and Brownstein’s distinctive style would still leave you in awe. If you’re a longtime fan and your streaming platform of choice starts playing ‘Dig Me Out’ after the final track, you’ll notice those basic foundations are still there, even if much of the urgency is missing. Then again, that’s partly the point: Path of Wellness is looser and more playful, and, when it fully leans into those qualities, better for it. But despite being generally pleasant and more cohesive than its predecessor, there’s still an awkwardness that ruins some otherwise fine songs. ‘Down the Line’, a meditation on the COVID-19 crisis, includes the lines, “It’s not the summer we were promised/ It’s the summer that we deserve.”

The closest the album comes to capturing the brilliance of the band’s earlier work is ‘Favorite Neighbor’, which features one of its most memorable hooks and fiery performances from everyone involved. But Path of Wellness offers very little to latch onto, stumbling most when it resorts to a brand of optimism that feels airless and stripped of personality. That’s more or less the note the albums ends on, hopeful yet strangely empty, urging us to ‘Bring Mercy’ back into our lives: “Pack your bags with things to lift you up/ Got nothing without hope/ Keep vision alive with the heroes you know.” It’s a lovely tune, and they sing it with conviction, but the details around and leading up to it are so vague that it just doesn’t hit the way it’s supposed to. Instead of showcasing the band’s knack for triumphant, introspective songwriting, the album leaves you wondering where, exactly, this middling path leads.

Album Review: Sleater-Kinney, 'Path of Wellness'Sleater-Kinney have always been pretty direct with their album titles, but The Center Won’t Hold was more telling than most. The phrase encapsulated the uneasy tension at the heart of the title track to the band’s St. Vincent-produced 2019 effort, an industrial, experimental cut...