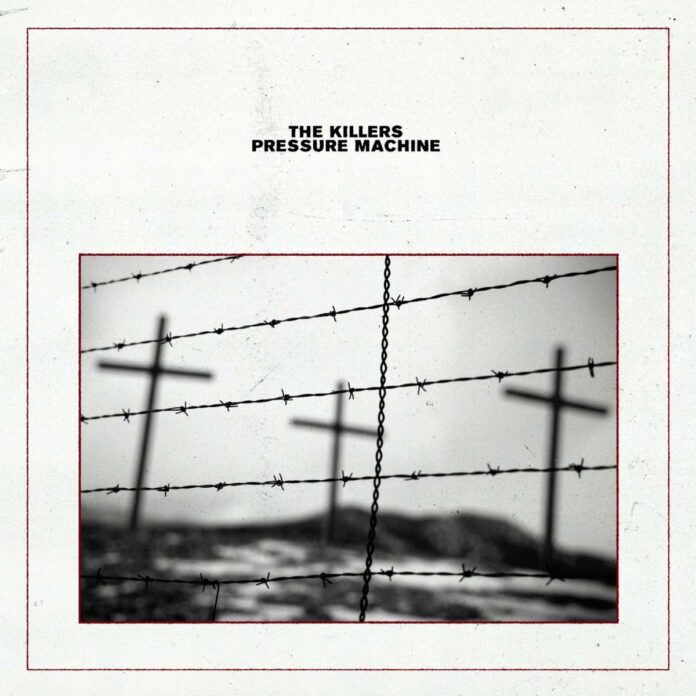 How much can you make of a short time spent in a small town? If your heart’s in the right place, the Killers suggest on their new album, the answer is quite a lot. Arriving less than a year after Imploding the Mirage, one of the biggest and most triumphant efforts of the band’s career, Pressure Machine emerged from a period of reflection for Brandon Flowers, who recently moved back to Utah, showing his kids scenes from the town that defined much of his childhood and adolescence. What the new record sets out to do isn’t all that different: though markedly quieter and less theatrical in sound, it doesn’t find him looking inward so much as trying to gather pieces from his upbringing, presenting often tragic stories of people who are rarely named in a way that can resonate with a wider and less invested audience.

In this attempt to narrativize parts of his past, Flowers’ own perspective can get lost, creating a false sense of distance between narrator and subject and undercutting some of the album’s emotional pull. But this newfound lyrical focus – for the first time, Flowers wrote lyrics for the songs before recording them – also opens the door to some of the frontman’s most compelling and refined writing to date. He starts with some scene-setting, painting a broad-strokes portrait of his boyhood town of Nephi, in the hills “where the light could place its hands on my head,” populated by good people who “still don’t deadbolt their doors at night,” and where the opioid crisis looms large: “When we first heard opioid stories, they were always in whispering tones/ Now banners of sorrow mark the front steps of childhood homes.” He still sees himself as that “stainless kid” in the midst of all the grief and suffering, trying to make sense of how it managed to cast such a dark, impenetrable shadow over this small town.

Then, he zeroes in on the particularly affecting story of a closeted teen and childhood friend contemplating suicide: “The cards that I was dealt/ Will get you thrown out of the game,” Flowers sings on ‘Terrible Thing’, recorded using the same Tascam model Bruce Springsteen used on Nebraska. Later in the tracklist, “terrible” becomes “desperate”, as Flowers takes on the perspective of a married cop who murders his girlfriend’s abusive husband on the striking ‘Desperate Things’. For most of the song’s runtime, Flowers’ sorrowful vocals are backed by deep, reverberating guitar and subtle flourishes that give way to haunting noise. The Killers have always been more interested in melody and feeling than delivering the perfect marriage of lyrics and sound, but here, and throughout Pressure Machine, the attention to detail pays off. More than just a stylistic choice, the dusky, ‘90s-indebted tones evoke a kind of solitary dread that not only serves as the backdrop for these tales but also helps bring them to life – or, in the case of ‘Desperate Things’, cut it short.

For the Killers, this level of sonic restraint is almost liberating. These songs aren’t quite antithetical to the anthemic type of music the band usually deals in – the grandeur of opener ‘West Hills’ and the propulsive ‘In the Car Outside’ come too close to that kind of thrill – but they’re so committed to the album’s concept that they seem content to throw away otherwise essential components of the formula. There’s no escapism here, no end in sight, and as the narrator in ‘Cody’ puts it, “we keep on waiting for the miracle to come.” Part of what keeps the record grounded in reality are the snippets of interviews with local residents that are interspersed throughout it, providing both a vivid embodiment and a fascinating contrast to Flowers’ songwriting.

The lack of catharsis can be frustrating, and Flowers’ relentless sincerity can be both inspiring and limiting. To understand how he chooses to channel the stories of small-town America, though, it’s worth quoting his response to why he never gets tired of playing ‘Mr. Brightside’: “I’m able to hear it through the hearts of the people in the venue.” This kind of heartfelt approach never gets old, even if it prevents him from embracing the subtlety that Pressure Machine’s finer moments lean into. On the title track, where Flowers’ hair-raising falsetto will have you checking for a hidden second Phoebe Bridgers feature, you can feel him drifting through memory lane, rhyming Power Wheels with Happy Meals. But when he sings of looking up at the sky and wondering how small we are, his home is suddenly everybody else’s.

Album Review: The Killers, 'Pressure Machine'How much can you make of a short time spent in a small town? If your heart’s in the right place, the Killers suggest on their new album, the answer is quite a lot. Arriving less than a year after Imploding the Mirage, one...