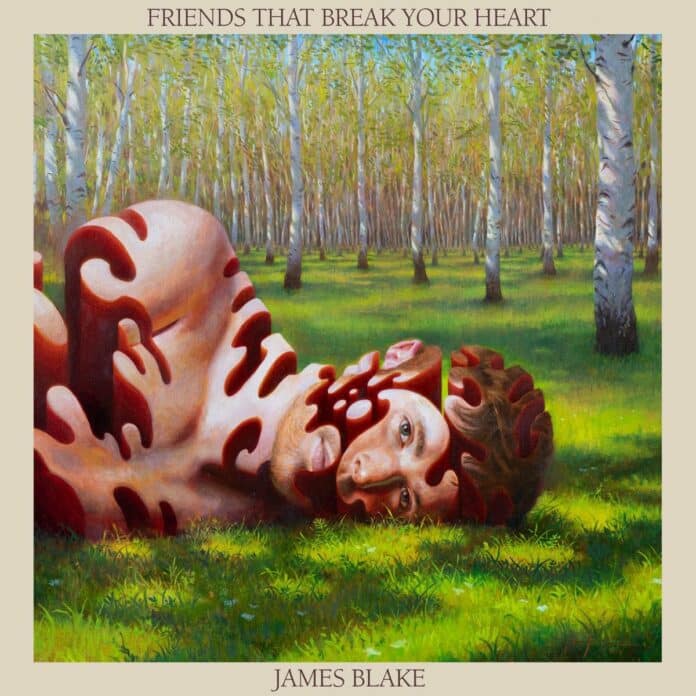 Following 2019’s Assume Form, James Blake released two EPs in the winter of 2020 that showed his penchant for seemingly conflicting approaches to songwriting: Before was a euphoric return to his dance music roots, while Covers saw him delivering stripped-back renditions of songs ranging from Billie Eilish’s ‘when the party’s over’ to Roberta Flack’s ‘The First Time Ever I Saw Your Face’. Unsurprisingly for an artist who’s gained a reputation as much for his innovative production as his expressive singing, he seemed equally comfortable in both modes. His attempts at blending traditional balladry with leftfield electronica have sometimes been less than successful – he’s best when he freely allows elements of both to permeate the structure of a song – with Assume Form serving as his weakest and most uneven effort to date, despite some impressive highlights. His fifth and latest album, Friends That Break Your Heart, more effectively makes the case for that stylistic mix by taking a safer yet frequently rewarding path.

Single ‘Life Is Not the Same’ offers a compelling early example of this approach, using skeletal production and eerie flourishes to accentuate what is at its core one of the catchiest and most resonant songs Blake has ever written, his signature falsetto paired with a soaring chorus to tantalizing effect. Much of the first half of the LP attempts to strike a similar balance as it floats between moods while navigating the titular theme, and the results are consistently gorgeous and often interesting, if not always as memorable. Opener ‘Famous Last Words’ sounds like the kind of song that would benefit from some additional layers, but the spare production ultimately underscores the lyrical theme of desperation and finality, an odd but intriguing place to start off the album. Halfway through, ‘I’m So Blessed You’re Mine’ juxtaposes the icy minimalism of Blake’s earlier releases with the playfulness and warmth that has marked his most recent output, mirroring a space of intimacy that seems impenetrable to anyone outside of it.

A newfound lightness finds its way in on Friends That Break Your Heart, and it’s the quality that renders it Blake’s most easy-going release yet. But there’s enough variation to prevent its directness from veering conspicuously into monotony. It’s worth remembering that Blake’s work is often less a matter of colour or tone than temperature, and it’s the way he plays with it that lends the record a certain amount of dynamism. ‘Funeral’ is as straightforwardly bleak as things get: the track features some of Blake’s most cliched lyrics – “I’ll come out of my shell/ ‘Cause I want the cake, and I wanna eat it as well” – but the way the keys start to subtly reverberate and crackle in the background feels like an enveloping ray of sunlight, nurturing each affirmation that “I’ll be the best I can be.” By contrast, the following track ‘Frozen’ is ominous but lacks any texture to take it beyond what’s suggested in the title; ‘If I’m Insecure’ fares better in that regard, starting from a similar place of emotional distance but ultimately reveling in the expression of vulnerability and devotion.

Blake called Friends That Break Your Heart a “concept album” upon its announcement, which doesn’t seem to be a very fitting description. There is a concept here, to be sure – a rather obvious one – but the singer-songwriter seems less interested in picking out the nuances of that emotional experience than painting a broad-strokes picture of heartbreak that resonates regardless of context. His own explanation is less than insightful: “With friendships, it’s not necessarily that the feelings are romantic, but you can genuinely love someone and it hurt like that,” he has said. But it barely matters: the title track is one of the most plainly affecting on the record, as Blake sings, “As many loves that have crossed my path/ In the end it was friends/ It was friends who broke my heart.” The distinction might seem arbitrary, but it doesn’t take away any of the pain that makes ‘Say What You Will’ such an utterly devastating track.

Rather than adopting an optimistic outlook, Blake’s attitude is one of vague acceptance, the kind that comes with finding a middle ground that’s all the more liberating for how unenticing it seems: “I’m okay with the life of the sunflower/ And I’m okay with the life of a meteor shower,” he sings, interrogating his relationship with the spotlight. It sounds much like the resolution of ‘Foot Forward’, a lesser song that’s more overtly about a breakup, where he sighs, “It’s okay, I know I’ll be replaced/ A bitter aftertaste, but it’s not that bad.” Whether it works or not depends almost entirely on the strength of his own conviction. At its best, Friends That Break Your Heart is capable of turning blunt resignation into a stirring kind of hope.

Album Review: James Blake, 'Friends That Break Your Heart'Following 2019’s Assume Form, James Blake released two EPs in the winter of 2020 that showed his penchant for seemingly conflicting approaches to songwriting: Before was a euphoric return to his dance music roots, while Covers saw him delivering stripped-back renditions of songs ranging...