Kristine Leschper, formerly known as the leader of Mothers, has announced her debut solo album. The Opening, or Closing of a Door is set to arrive on March 4 via Anti-. Today, Leschper has shared a self-directed video for the new single ‘Ribbon’. Watch and listen below.

“I found myself wanting to explore love songs, and this is really the framework of The Opening, or Closing of a Door,” Leschper explained in a press release. “‘Ribbon’ is a love song that holds a certain tension—it is the taut line of attempting to read the intentions of another, built with imagery of opposing materialities: a knife meets a ribbon, asking for a kind of vulnerability. A suggestion of something new emerging at this intersection.”

Of the video, Leschper added:

This was my first experience writing and directing a video, as well as designing and fabricating the set. I wanted to play with the perceived reality or unreality of a space, using an absolute economy of materials. When does an environment begin to lose its “realness” and slip into the imaginary? There’s something interesting in the posturing of lip sync in music videos — I wanted to throw the microphone out of frame, as if to say: this is not a real performance, it is a performance of a performance, it’s pantomime! This is not a table, it is a painting of a table! Objects come and go, shifting between hard and soft, flat and dimensional, in a setting that provides little more than an abstraction of interior space.

The Opening, or Closing of a Door Cover Artwork: 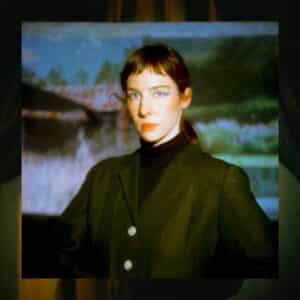 The Opening, or Closing of a Door Tracklist: