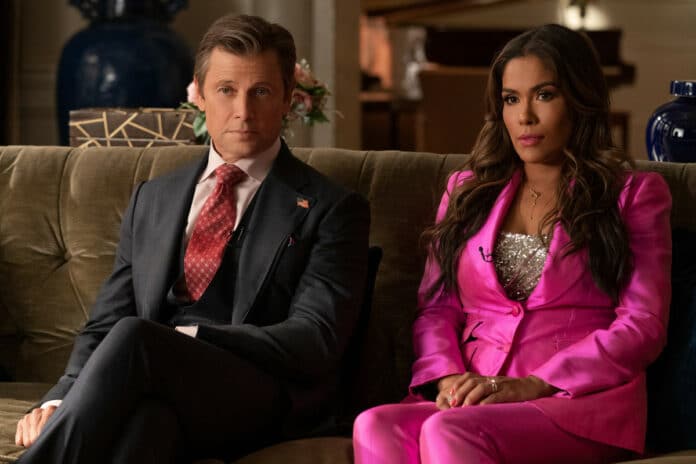 Dynasty as a show went through its ups and downs, from the main character’s sudden exits to some nerve-wracking plot holes, but in the end, it has always risen from the ashes and shone brighter than ever. Even if sometimes that can make for some unexpected moments, the lack of balance in its writing can be annoying at times; a perfect example of this is the new season. Things were slow, dragged, and disappointing for a season premiere in the first episode. But, swiftly, the second episode altered that and quickly became one of the show’s best episodes to date.

Here are the best moments from the season 5 premiere of Dynasty.

Alexis and Adam’s toxic mother/son relationship goes way back. After everything they’ve done to one another, you would think that betraying each other would start getting old, but it’s the complete opposite. No one brings the worst out of Adam than Alexis. His ‘mommy’ issues have been profound and out of control since he entered the show, which ends up giving us some of the craziest and twisted moments on Dynasty. This relationship is one of the more complex and unpredictable. Occasionally they are mother and son. Other times they are enemies. There’s no balance. In season 5, their journey continues; and the betrayal is imminent.

9. Liam finally tells Fallon how he feels about her and their marriage.

There weren’t many memorable scenes from the first episode of season 5. Still, one that stood out was the anticipated talk between Fallon and Liam about the length of repercussions that Fallon’s previous actions had on how Liam feels about her and their relationship. The season begins with Fallon in the hospital recovering from a gunshot. Because of Fallon’s condition, Liam feels guilty and tries to ignore what she has done and how their relationship is a complete mess. The episode builds up to Liam’s more robust emotions and inability to keep them to himself. He finally explodes and lets everything out. Adam Huber delivers once again a shattering performance, raising the question — is this the end of Falliam?

8. Alexis is trying to run out of the courtroom

At times, Dynasty feels like a sitcom. The way their most dramatic scenes invariably turn into comedy is hilarious in itself. A courtroom scene with convicted main characters tends to be extremely heavy in a typical drama show but not on Dynasty. In this scene, Alexis delivers one of the season premiere highlights, with her failed attempt at escaping the courtroom upon her sentencing.

Season 5 opened with a brother/sister rivalry that is now one of the most entertaining plots on the show. Amanda has become a scene-stealer and a fan favourite, and the dynamic between her and Adam is very much present in the season premiere. It all comes down to Alexis and how damaged the kids are by her past decisions as a mother. In the end, that’s the defining factor and the demise of their relationship.

Yeah, Eva may be entirely and disturbingly crazy, but she knows how to shut up Fallon Carrington with some ugly truths. When Fallon visits Eva in prison, she expects to get her way once again, but facing someone who has nothing to lose, she ends up with an unwanted confrontation with the things she has done. Eva, with no hesitation, laughs at Fallon’s threats and tells her how two-faced she can be.

5. Culhane and Sam visit Fallon at the hospital

Culhane is far from being my favourite character; I always felt like his storylines were either leading everywhere or nowhere at all. On the other hand, Sam is one of my favourites. Still, his storylines since Steven left are the definition of a mess, not reaching their potential. Nevertheless, for one, the way both Culhane and Sam struggled to face the truth about Fallon’s condition and their fear of losing her were highly relatable and sweet. Sam and Fallon are always pleasant together, but I take my hat off to the relationship development between Fallon and Culhane. Romantically, they were the worst, but as friends, their scenes are lighter and, in return, more enjoyable to watch. This choice is one of the things that the Dynasty writers got right.

If there’s something Liam was never afraid to do, it was keeping himself accountable for what went wrong in his relationship with Fallon. This time around was no different. Even if he doesn’t have much blame to carry, his apologies come from a place of unconditional love mixed with the fear of not wanting to lose his soulmate. Liam is a carer. Back in season 2, we learned that he always jumps at the chance to take care of his loved ones, even if it means putting his happiness below their own. We saw it with his mother, and we saw it with Fallon. The season 5 premiere reminded us that, while Fallon Carrington is the soul of Dynasty, Liam Ridley is its heart.

If I had to choose the most significant “WTF” moment of the season premiere, this would be it. After all the Crystals that we had throughout the show, Dynasty decides to level things up and bring the soap opera twist of all twists — the evil twin storyline. Honestly, this is the kind of entertainment I expect from a show like Dynasty, precisely what makes it so attractive. Besides the layers that this twist will bring to the show’s new season and entire storyline, this is a much-needed challenge for Cristal’s character, which doesn’t necessarily involve Blake.

2. The flashback to Falliam’s first Christmas together

Liam’s flashback to his first Christmas with Fallon was one of the most heartwarming scenes between the two. The undeniable chemistry between Adam Huber and Elizabeth Gillies took over and was amplified by their beautiful harmonies during their duet, giving the fans another unforgettable moment. Listening to Liam’s voice becoming one with Fallon’s was beautifully unexpected. It took my breath away.

In between love confessions, and some good old banter over Christmas presents, Liam says that it was the best Christmas he ever had, showing us once again the depth of his love for Fallon and how despite the ups and downs of their relationship, he is the happiest when he’s with her.

1. Fallon wakes up from a coma after dreaming about her future with Liam

If you thought Liam’s memory was going to make you cry, then Fallon’s dream about a future Christmas with Liam and their future kids is going to make you weep. The seemingly intended foreshadowing in the dream of Fallon and Liam’s future was probably one of the most profound and remarkable things on the show. Hopefully, this will help Fallon realise what is essential in her life — her future with Liam.

Hopefully, this dream is the direction for her upcoming change and a step closer to realising that her happiness does not rely on her father’s approval or career. But the dedication and preservation of the Dynasty that she’s building alongside the man of her dreams. Perhaps, this was a step forward in Fallon’s character development that the audience has been waiting for and not the back-and-forth trajectory that the writers have been doing for almost five years.

Everything else that happens after Fallon wakes up from her coma is Dynasty’s way of settling us in for the rest of season 5.