Julie and Dany, the duo of Julie Doiron and Dany Placard, have announced their first collaborative album. Produced entirely in their home in Memramcook, New Brunswick, Julie et Dany was written, composed, and recorded during quarantine between Quebec and its neighbouring province. It’s due for release on April 29 on Simone Records. Along with the announcement, they’ve shared a new song called ‘Mayo’. Check it out below and scroll down for the album’s cover artwork.

“‘Mayo’ is a day like many days in our little house in New Brunswick,” the pair said in a statement. “And while it seems we are just singing of things like mayonnaise and carottes, we are mostly singing of the ups and downs and all the moments in between.” 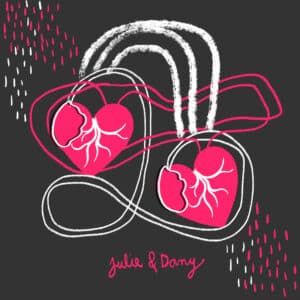