Album Review: Hurray for the Riff Raff, ‘Life on Earth’ 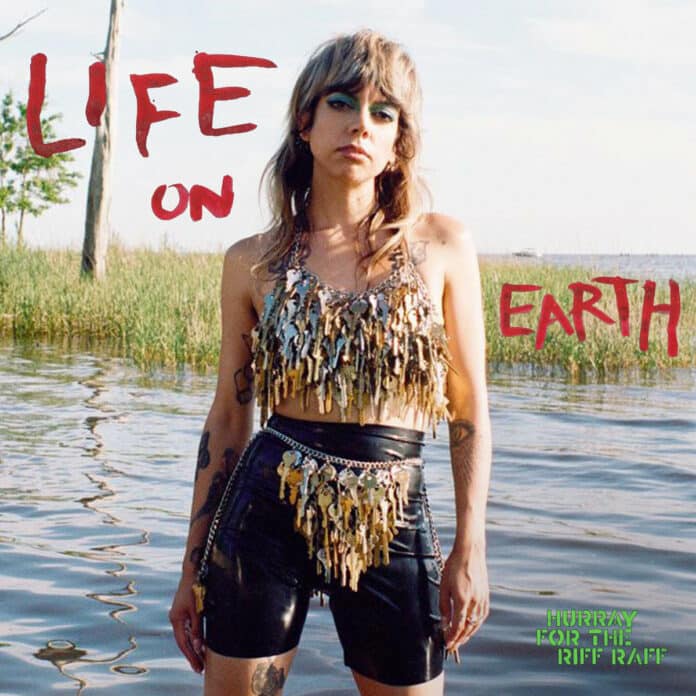 Alynda Segarra has long been making songs of compassion and resilience. On the closing track to Hurray for the Riff Raff’s 2012 album Look Out Mama, they sang, “Something’s wrong and I’m feeling strange/ Nothing seems to be the same/ Hear that wide muddy river flow/ Singing something’s wrong we just can’t control.” It’s a gentle, pensive song that the Bronx-born singer-songwriter wrote for their close friends in their longtime home of New Orleans, a city that had endured periodic explosions of violence, particularly a rise in home invasions. It may not achieve the same kind of resonance that the band would reach for on their later records, but it’s a reminder that new beginnings always carry a hint of the past, that survival is a matter of reclaiming control. You might not be able to hear that in the song – it’s only a kind of low-key lullaby, set to the sound of rain hanging in the air. But there’s something to be gained in looking back, its echo running through Life on Earth, their striking new album.

Hurray for the Riff Raff has continuously evolved in the past ten years, finding ways to repurpose the American folk traditions that Segarra spent years studying before arriving at a singular sound on 2017’s The Navigator – a powerful record that saw them wrestling with their Puerto Rican heritage. Yet the spirit of defiance that has marked their best work has remained not only a constant, but the guiding force behind the expansion of the band’s sonic palette. Segarra, who left home at 17 to travel the country on freight trains, still sings of suffering and displacement – Life on Earth begins with the singer on the run, evading danger: “Go away from here, darling/ Go to some distant shore/ Because it’s not safe at home anymore.” The shimmering, synth-led backdrop promises escape, while Seggara’s voice, deep and resonant, shines through with a sense of urgency. Its coolness could at times be mistaken for a lack of passion, but it has the effect of underlining the threat of violence that looms over the album – only vaguely implied at first but clearly outlined on later tracks, encompassing everything from humanitarian crises to environmental collapse.

Borrowing from hip-hop, ‘Precious Cargo’ is deceptively light and breezy on the surface, a strangely impactful way of presenting the story of people being detained at an ICE facility: “Immigrants are suffering,” one of the men says, “This song is my life.” On the triumphant ‘Saga’, a song reflecting on Dr. Christine Blasey Ford’s testimony against Brett Kavanaugh, “a terrible news week” leads the way to confronting and breaking free from past trauma. With production from Brad Cook, Life on Earth works on multiple levels: it can sound buoyant and devastating, tackling political as well as personal concerns, which are in fact impossible to separate. These “nature punk” songs, as Segarra has described them, embrace a philosophy that argues for a connection with nature and aspires towards its ability to adapt in the face of disaster. You can hear it in the album’s ever-shifting soundscapes, or in Ocean Vuong’s poetry on the striking ‘Nightqueen’, or in the anthemic folk-punk of ‘Rhododendron’ (co-written with My Morning Jacket’s Jim James), which rushes through a list of plant names, interweaving them with haunting imagery of “police barricades” and being “addicted to the high of violence.”

On the song’s chorus, Segarra delivers another urgent plea: “Don’t turn your back on the mainland.” The lyrics are poetic and more allusive than in other Hurray for the Riff Raff songs, but the context is one of destruction and loss: “Everything I have is gone/ And I don’t know what it’ll take to carry on.” Ultimately, it’s Segarra’s “addiction to freedom,” as they put it on ‘Nightqueen’, that drives Life on Earth to new and unexpected places. That it signals a kind of transformation is obvious; but it is also an invitation, in line with the 2017 activist text that influenced it, Emergent Strategy, to “feel, map, assess, and learn from the swirling patterns around us in order to better understand and influence them as they happen.” Perhaps that’s why it ends with ‘Kin’, a field recording of a tree covered in wind chimes in a New Orleans city park: a natural wonder transformed to produce a peaceful melody. Sit under its shade for no more than a minute, Segarra seems to say, look around, and contemplate where you might want to go next.