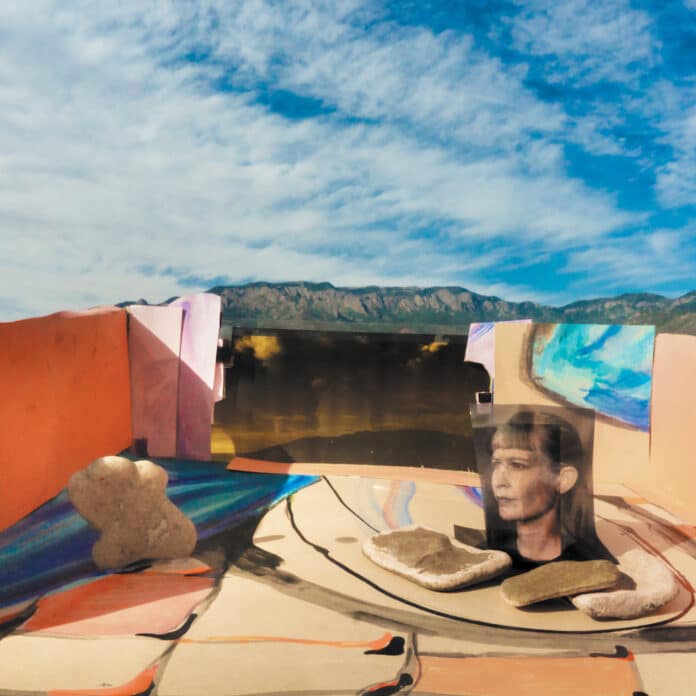 Perhaps the first thing that strikes you about Classic Objects is its airiness; a quality that’s not often associated with the work of Jenny Hval. As heady and complex as her explorations of gender identity, sex, and capitalism have been over the years, her music can also be direct and vulnerable, approaching accessibility by deconstructing rather than adhering to pop structures. If her first album for 4AD sounds like a strangely straightforward effort from the Oslo-based artist, it’s because that was part of the intention. “I wondered what “just me” could mean,” she explained in press materials, a thought that became especially pervasive during the stillness of the pandemic, forcing her to contemplate the relationship between art and identity. It’s a record that floats away and then slowly reveals itself over time, making room for introspection and simplicity while allowing the idiosyncratic nature of Hval’s stories to ripple through – even as the question of what makes up the self remains out in the open.

Classic Objects coasts on a New Age sound that’s light and gentle enough to create the illusion of comfort – freedom, even – but if the gorgeous melodies occasionally sweep the listener away, they don’t go as far as to cloud Hval’s commentary. She has described the album as a combination of “heavenly things and plain things,” a map of places that are familiar and imagined, but the usefulness of that distinction is unclear. “What is a home but the place you’ll be dying?/ And what’s far away but places to lose yourself?” she sings on the opening track, and you might find yourself wondering which of these two realms the album inhabits; in the way it revolves around personal memories while drifting off within its own peculiar world, it probably represents both. But as transportive and downright beautiful as the music here can be, it never falls into the trap of escapism or the shallowness of comfort. Rather than serving as a pleasant distraction from the sophisticated, conflicted qualities of Hval’s writing, the relaxed atmosphere comes to resemble a sort of dream state – a concept as profoundly human as it is constructed, teeming with possibilities. It’s grounding and freeing at the same time.

It’s also a compelling way to frame an album that’s largely about the external systems that constrain us. On ‘Year of Love’, the story of a proposal that happened at one of Hval’s shows has her reckoning with the institution of marriage and her complicity within the “industrial-happiness complex.” Along with art and the self, love is one of those limitless ideals that becomes muddled, banal, and potentially confining when it’s tied up in the form of a social contract. Hval’s inquiries are cut with autobiographical detail, and you can tell that the person questioning her chosen path on ‘American Coffee’ is the same one who wonders whether the objects she holds are “are art/ or just stuff” on the title track, and the same one who enters “the expanding universe” by way of insects on ‘Year of Sky’. In her fluid interactions with the outside world, Hval finds a mountain of emptiness, tension, and wonder, but even when she loses herself in the chaotic trip, her voice somehow remains uniquely identifiable.

Through all the twists and turns, Classic Objects opens itself up to moments of transcendence – perhaps the most unexpected part of embarking on this journey. The line “Sometimes art is more real, more evil/ Just lonelier/ Just so lonely,” from ‘Jupiter’, is central to the album not only because of how much emotion Hval packs into her soaring performance, but because of the implied revelation that there might actually be something wild and vital in that loneliness – something removed from ideas either erosive or revolutionary. She captures some of it by dipping into the absurd on ‘Cemetary of Splendour’, with its earthy tones and immersive textures. The final track, ‘The Revolution Will Not Be Owned’, returns to the concept of a dream, a place where “Something is opened, and lets go of consciousness.” Whatever form it takes – symbolic or material, impossible or real – this self belongs to us.

Album Review: Jenny Hval, 'Classic Objects'Perhaps the first thing that strikes you about Classic Objects is its airiness; a quality that's not often associated with the work of Jenny Hval. As heady and complex as her explorations of gender identity, sex, and capitalism have been over the years, her...