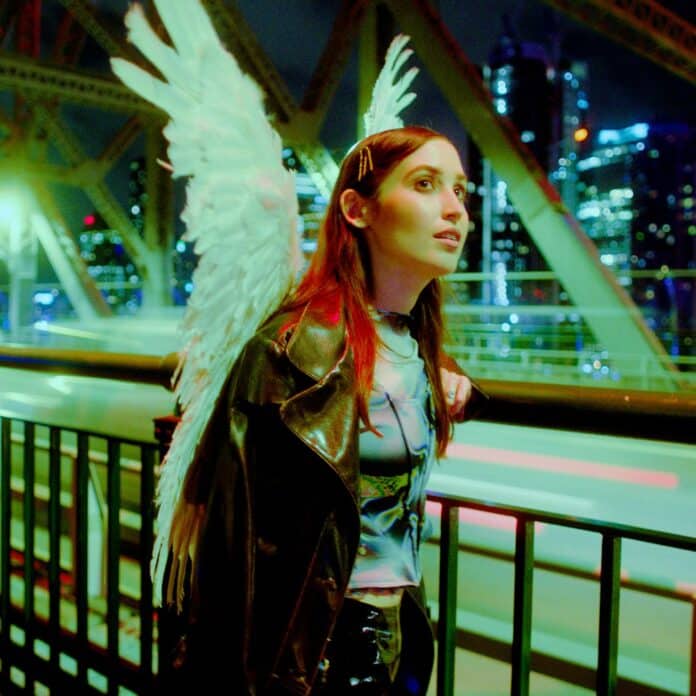 In Hatchie’s music, the line between obsession and disillusionment has always been blurry. Harriette Pilbeam has been developing her brand of infectious, fuzzed-out indie pop ever since 2018’s Sugar & Spice EP, and her best songs are so dazzling you might forget about the fears and insecurities that permeate them – if anything, they proved that the fleeting, destructive nature of love is exactly what makes us rush towards big gestures and age-old clichés. ‘Obsessed’, one of the many highlights off her 2019 debut Keepsake, dressed the feeling of abandonment around an inescapable hook that lived up to the song’s name. If her compositions combine the ethereal textures of shoegaze with the irresistible structures of pop, her lyrics often find ways to push beyond melancholy acceptance and into a strange form of self-assuredness. Her second album, Giving the World Away, is her most dynamic effort yet, adding weight to the music’s underlying concerns without diluting their lush, buoyant energy.

In fact, the production is considerably grander and more ambitious than before, but Hatchie doesn’t use it to hide away – it’s still the newfound focus of her writing that shines through the most. In a statement, Pilbeam stressed that “there’s more to me than just writing songs about being in love or being heartbroken” – and even when she does write about a relationship, it serves as a relfection of the self more than the intoxicating effect of a certain moment. ‘Lights On’ sets the stage by seemingly introducing a more cinematic version of what Hatchie has delivered time and time again – a quick, boundless attraction set to a euphoric pop melody – but it’s not long before she offers a peek behind the curtain: “You can’t tell me it’s not a problem/ When you’re stuck inside your head.” On the title track, another question strikes her: “What if what drew us together / Triggers our demise?” She makes space for such worries throughout Giving the World Away, paying as much attention to the nuances of a situation as she does the layers upon layers of sound that envelop it.

But hopelessness doesn’t only exist at the edges of the album – it’s the thing that burns at the core of some of its most memorable songs. Hatchie’s honesty is illuminating: one might be quick to compare early single ‘This Enchanted’ to ‘Obsessed’ on subject matter alone, but the singer’s perspective couldn’t be more different – when she declares “Your image is all I see” in the chorus, she’s well aware of the distance between her and the other person: “I try to run away from the echoes/ But they hit harder every time.” The nostalgic sweetness of the song isn’t a means of escape; it amplifies the wash of longing she can’t leave behind. ‘Quicksand’, which was co-written with Olivia Rodrigo producer Dan Nigro, strikes a perfect balance between dark themes and bright, rhythmic pop: “I used to think that this was something I could die for/ I hate admitting to myself that I was never sure.” Even as she lets go of obsession to embrace uncertainty, her music remains just as enchanting.

For someone who was initially skeptical about working with co-writers, Hatchie makes sure that they do more than add a glossy sheen to her already polished music. The clarity of the mix actually mirrors Pilbeam’s headspace: “Trust what you fear, use it to your advantage, feel its strength,” she sings on ‘Take My Head’. It’s a potent line, but the track is one of the few here that lack the tension that she and her collaborators so deftly build elsewhere on the album, which diminishes her own voice. Pilbeam has said that she feels she’s only “scratching the surface” with this album, and you sometimes wonder if she could have dug a bit deeper. But with an emotional complexity to complement its dizzying approach to sound, Giving the World Away probes the possibilities of dream pop as a mode of expression, leaving just enough to the imagination.

Album Review: Hatchie, 'Giving the World Away'In Hatchie’s music, the line between obsession and disillusionment has always been blurry. Harriette Pilbeam has been developing her brand of infectious, fuzzed-out indie pop ever since 2018’s Sugar & Spice EP, and her best songs are so dazzling you might forget about the...