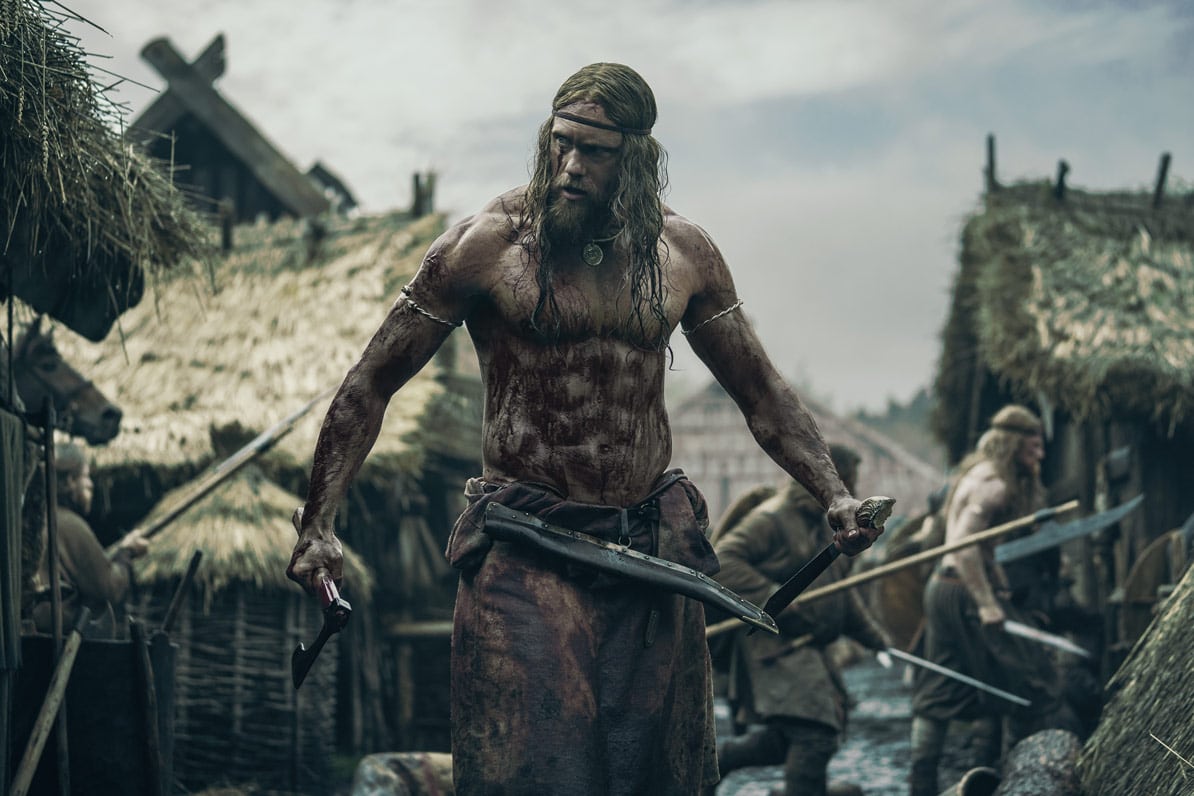 The Northman, Robert Eggers’ viking revenge saga, is another retread into the brutality of history. Eggers’ debut film The Witch was a concoction equal parts folkloric horror and historical account of 17th-century New England puritans. Similarly, The Lighthouse was an extensively researched story of two isolated 1890s lighthouse keepers, yet loaded with tentacles, homoeroticism, and phallic imagery. The Northman, a historical-epic drenched in blood and soot, seems on paper a similar fusion of historic reproduction and genre pleasure. Though the film bolsters some joyfully psychedelic passages and kooky side roles, it’s ultimately constrained by its one-noteness. Eggers, whose filmmaking on The Lighthouse boomed with an ecstatic playfulness, now seems trapped into rigid filmmaking conventions. The result is little more than a rote and ponderous riff on Conan the Barbarian.

The film loosely adapts the Norse legend of Amleth: a narrative about a vengeful prince plotting against his regicidal uncle (Hamlet was inspired by the same legend). In Eggers’ version, Alexander Skarsgård stars as Amleth, a man whose entire existence boils down to a three-part mantra he chants in his head: “I will avenge you, Father. I will save you, Mother. I will kill you, Fjölnir” (Fjölnir (Claes Bang) being his throne-usurping and queen-claiming uncle). Amleth’s neanderthalic physique trudges forward, neck permanently arched at a 45° angle (this performance must’ve done irreversible damage on Skarsgård’s posture). He’s hulking and animalistic, fuelled by a one-track mind for revenge. It’s a laconic and purely bodily performance; in one of Amleth’s first scenes, he knocks an opponent to the ground, feasts on his jugular, and then howls at the moon. While a contrived, final act romance expands Amleth’s desires beyond a one-dimensional thirst for revenge, Skarsgård consistently embodies a delightfully bestial energy.

The movie’s replete with scenery-chewing (highlights include standout moments from Willem Dafoe and Nicole Kidman) and an endless onslaught of limit-experiences. Carnage erupts without an inkling of sentimentality. Aside from the prologue, the only deaths depicted with any sympathy are villagers slaughtered in the background of an early viking massacre: a sequence composed with visual references to Elem Klimov’s Come and See. Yet the nod to Klimov feels underserved, as The Northman’s violence is pervasive yet weightless and scarcely visceral. In The Northman, wrath is all-consuming. The movie mirrors its protagonist’s one-dimensionality, unflinching at depravity. The characters on screen are stern, equipped with Icelandic poet Sjón’s archaic dialogue. Nonetheless, there’s a vulgar pleasure in the movie’s self-seriousness. Deliberate or not, its prolonged gloom mixed with its elaborate historical dress-up and theatrical performances find a dark humour through bleakness rather than in spite of it.

Camerawork in The Northman is precise and often linear. The camera will dolly forward in prolonged shots, moving directly towards a target and never wavering. At other points, Eggers will slowly pan across open fields. Every movement is methodical and measured. The slow, calculated motion gives the impression of the camera as a purely mechanical instrument rather than a subjective device with imprecisions. While there’s occasional splashes of abstract or associative imagery (early on, the camera pushes into Ethan Hawke’s King Aurvandil War-Raven’s torso, moving into his heart and following his blood as a conduit to arrive at a CG-rendered visualisation of a family tree), these are rarities. Eggers’ cinematography, with its intricately choreographed long takes, is clearly the product of arduous labour. However, there’s very little imagination to his camerawork, often resorting to the most straightforward language to visualise action. The visual storytelling is economical, often to the point of redundancy (the movie boasts innumerable identical shots of figures silhouetted by firelight). Ultimately, the directness of Eggers’ camera and storytelling aligns with the movie’s fatalist backbone. Amleth walks straightforward towards what he believes is a predetermined destiny and Eggers’ camera mimics his resolute gait. Nonetheless, in a film so focused on barbarism and bloodthirst, Eggers’ tendencies towards aesthetic cleanliness and One Perfect Shot-type compositions feel misplaced.

In his three feature films, Robert Eggers forges narratives from histories and cultural myths. He’s a meticulous historian, obsessed with period authenticity. Yet where a film like The Lighthouse toys with the specificity of its milieu to unleash an irony-drenched mood piece, The Northman is hindered by its straightforwardness. It’s largely milquetoast in its narrative, characterizations, and aesthetic compositions. Here, Eggers seems to be trying to supress the chaos of history, rather than leaning into it. As a result, his storytelling suffers.

Review: The Northman (2022)The Northman, Robert Eggers’ viking revenge saga, is another retread into the brutality of history. Eggers’ debut film The Witch was a concoction equal parts folkloric horror and historical account of 17th-century New England puritans. Similarly, The Lighthouse was an extensively researched story of...