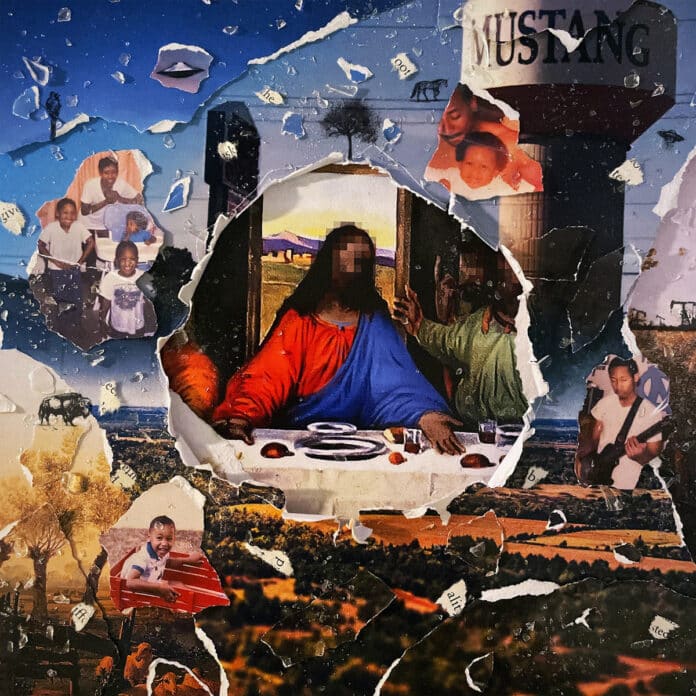 When Bartees Strange sings, “I don’t believe in the bullshit/ Of wondering when we die,” you’re inclined to trust him. It’s one of the many declarations he throws our way on Farm to Table, his sophomore LP and first for 4AD, delivered with the kind of self-assurance that made his 2019 album Live Forever such an exhilirating debut. The song, titled ‘Mulholland Dr.’ and drawing from his time in California, is both overwhelming in its beauty and more than a little suspicious of what lies beneath the surface – it would be foolish to think that the musician born Bartees Cox Jr., who spent most of his childhood in Oklahoma, is simply relaying a hedonistic worldview without a whiff of irony. But the earnest confidence that shines through the track is enough to make you ignore the pool of existential dread it might inadvertently stir up. Of course, it doesn’t hurt that ‘Mulholland Dr.’ boasts a chorus big enough for a stadium full of people to shout along to. In a setting where dozens of strangers briefly come together as a sort of family, how can you say those words ironically?

For now, though, moments like that are imbued with a note of ambivalence. ‘Mulholland Dr.’ is only the second track on Farm to Table, too early for Cox to have established his current philosophy on life even if he wanted to. His lyrics are incisive but far from impersonal – like his take on genre, the stream of thoughts and emotions that glide through his music can be sharply defined or intentionally blurry. Even if you go into Farm to Table with no idea as to where Bartees Strange stands or what his music sounds like, however, opener ‘Heavy Heart’ does a lot of that work. By opening the record with its most revealing and memorable song, Cox ensures we tag along for the rest of the ride with zero reservations whatsoever. He levels with us, and then he lifts off. One of the songs recorded when Cox and his bandmates entered the studio just after the release of Live Forever, ‘Heavy Heart’ finds him laying out many of the emotional themes that recur throughout the album: the relationships he wants to heal, the places he wants to go, the person he wants to avoid becoming.

It carries the weight it’s supposed to, but the release is even more impactful: the horns that erupt halfway through remind me of Oceanator’s ‘Bad Brain Daze’, a highlight off an album Cox co-produced, and the exuberant catharsis it brings before the record’s inevitable comedown. But if the rapping on the first track isn’t enough to prepare you for a less than conventional sonic journey, it’s clear that Farm to Table follows a different trajectory than most rock albums, foregoing the trusted rise-and-fall structure. I’ll admit that on the first few listens, it was hard to get around the fact that the record is frontloaded in the sequencing. ‘Wretched’, the third song, is an explosive dance cut that catches you off guard no matter how many times you’ve heard Live Forever’s ‘Flagey God’. Then we get ‘Cosigns’, a bold but fitting choice for a lead single in which he shouts out peers like Phoebe Bridgers, Lucy Dacus, and Courtney Barnett before bragging about FaceTiming with Bon Iver’s Justin Vernon. The cheekiness alone would be enough to grab anyone’s attention, but he still makes space to wrestle with the complexity of his feelings: “How to be full, it’s the hardest to know/ I keep consuming/ I can’t give it up/ Hungry as ever, it’s never enough.”

With ‘Hold the Line’ as its closer, Farm to Table would make for a slick, near-faultless EP. It’s not the only ballad on the album – the poignant ‘Tours’ precedes it – but considering the nuanced subtlety with which Cox usually touches on politics, the rawness of ‘Hold the Line’, which was inspired by George Floyd’s daughter Gianna, is unmatched in its power. There’s several more tracks left, though, and the more you listen, the easier it is to view this final stretch as an essential part of the record. He relaxes into different modes of songwriting, teasing out a musical experiment with ‘We Were Close for Like Two Weeks’ and getting reflective on the gorgeous ‘Black Gold’. On ‘Escape This Circus’, right when you think Cox is just allowing himself to groove out, he hits us with his most furious crescendo. “I’m the only one who can write that song,” he told the album’s co-producer, Chris Connors, referring to ‘Cosigns’. But you could say the same about the record as a whole. If Live Forever proved that Bartees Strange is capable of doing anything, Farm to Table asserts that no one can do everything quite like Bartees Strange.