Mykki Blanco has announced a new album called Stay Close to Music. The follow-up to 2021’s mini-album Broken Hearts & Beauty Sleep lands on October 14 via Transgressive and includes the early singles ‘Your Love Was a Gift’ and ‘Family Ties’ as well as guest spots from R.E.M.’s Michael Stipe, Sigur Rós’ Jónsi, Devendra Banhart, and more. They’ve also shared the new single ‘French Lessons’, which features Kelsey Lu; ANOHNI also appears on the album version. Check out its Felix Kalmenson-video below, and scroll down for the LP’s cover artwork (by Frank Dorrey) and tracklist.

“The song is a reflection on the possibility of true love, on the notion that one truly can experience what we see in the Hollywood films,” Blanco explained in a statement. “The song is also this ode in a way to Lou Reed. I’m not what I would consider a singer at all, I’m a talk singer so I look to people in history who have that same style: Tom Petty, Jonathan Richmond of the Modern Lovers, Lou Reed – these are all AMAZING ‘talk singers’ and I feel comfortable in that style vocally. The song was originally composed by FaltyDL and it encapsulated so much sonically of what I was trying to articulate with my own music. FaltyDL has a way of touching on the spiritual subtleties of life. He is able somehow to create mystery out of banality, to create tranquility and fill a room with zen-like vibrations, something unnameable and yet so familiar a feeling.”

Of collaborating with Kelsey Lu, Blanco added: “Kelsey Lu, I’m sure will go on to become one of the legendary artists of my generation. A classically trained virtuoso with a voice that sounds ancient like a bell ringing for the first time, like something out of a Greek odyssey. I have been a long-time super fan of Kelseys and collaborating with her on this song has been a very special moment for myself and FaltyDL.” 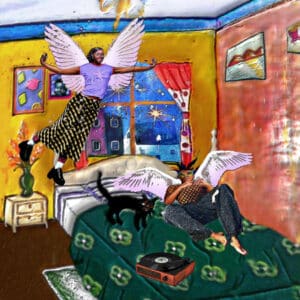