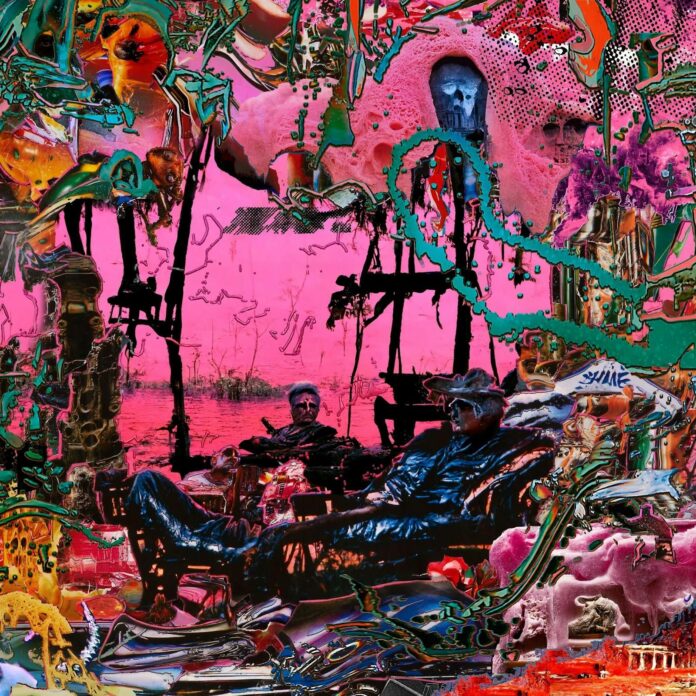 black midi named their first album Schlagenheim, a word with no particular definition that can roughly be translated to “hit home” in German. (“The most important thing is that it’s absolutely meaningless,” guitarist Cameron Picton said in an interview.) The title of its follow-up, Cavalcade, was just as apt but a bit more suggestive, representing the cavalcade of characters populating the album. Their latest is more direct and needs no further explanation: Hellfire. (Notably, Geordie Greep originally imagined it as the title of their debut, while their second album was mostly recorded at Hellfire Studio.) Could this mean the London experimental band is attempting to dial back some of its eccentricities in favour of a more straightforward but still hideously chaotic approach? A press quote from Pinton suggests they’re not exactly interested in delivering some kind of morally definitive statement: “I don’t believe in Hell, but all that old world folly is great for songs.”

Hellfire is certainly proof of that, but the album is no less confounding or frenetic than the group’s earlier material. It finds Picton, Greep, and drummer Morgan Simpson combining the juvenile intensity and restless experimentation of Schlagenheim with Cavalcade’s melodic dynamism and dramatic presentation, once again eschewing conventional narrative even if its questionable cast of characters have plenty in common. One could easily argue Hellfire presents what is mostly a more refined, cinematic, and extravagant version of what the band has tested out before, with a few adjustments that make it more immersive – Greep sings from a first-person perspective instead of third, his vocal theatrics as volatile and unpredictable as the songs themselves; Marta Salogni, who worked with the band on Cavalcade opener ‘John L’, adds spaciousness to the overly busy production; guest saxophonist Kaidi Akinnibi scorches through the endless delirium – yet on the first few listens, it’s hard not to register it as something entirely new and outlandish, or at least a wild left turn for a band that may not take itself too seriously but is definitely very serious about not falling into stasis.

“There is nothing you will find/ Running at full speed,” the protagonist of Hellfire warns on its opening title track, and even with a lyric sheet in front of you and a moment to dissect each and every line, it’s not exactly an album you’re meant to make sense of, its ceaseless, militaristic pace circling on a primordial emptiness rather than any hidden or explicit truth. But there is a newfound specificity in Greep’s storytelling that feels inextricable from, not just an extension of, the unruliness of the instrumentation. “Always chasing the first/ Always chasing the free/ Always chasing decency/ Never adequate enough,” he rambles on, inadvertently summing up a central theme that runs through the lyrics: all sorts of depraved characters caught up in dreams of escape and victory and entertainment that ultimately lead to their downfall. In the speed-prog hellscape of ‘Sugar/Tzu’, a futuristic boxing match comes to an abrupt end when a young boy commits murder, believing he is gifting the audience a one-of-a-kind spectacle; in ‘Dangerous Liaisons’, a farmhand becomes a hired killer seemingly by happenstance.

While Cavalcade’s dynamic shifts spread out through the album, here they are often integrated into the structure of each song. ‘Welcome to Hell’ switches maniacally between different permutations of metal, from funk to thrash to epic, an unprecedented orchestral mayhem heightening the drama; the climactic ‘The Race Is About to Begin’ sprawls across seven minutes, leaving room for the narrator’s final revelations. “All sins irrepressible/ No use digging holes to hide/ The rupture comes and leaves no stone unturned/ So don’t wish for anything,” Greep sings over a tender backdrop, less than a minute after the album’s most frantic explosion. Picton’s horrific ‘Eat Men Eat’ fuses post-hardcore maximalism with flamenco; his other contribution, the finger-picked ‘Still’, is the album’s quietest, most personal song. Hellfire might be black midi’s most audacious and disorderly album, but every element of it is crafted with such meticulous precision and intentionality that it remarkably never flies off the rails.

It’s also the first black midi album where you get a clearer sense of how those musical contrasts feed into its lyrical concerns. Unlike some of their invented characters, black midi aren’t averse to genuine emotion – just extremely aware of its duality and the slipperiness of trying to externalize it. The conundrums these characters must face are laughable and bizarre and cruelly ironic, so of course they must be blown out of proportion; comical excess becomes the only means of digging through ambiguity. Even with the elaborate framing of ’27 Questions’ – the narrator sneaks into a theatrical performance during which a fictional actor named Freddie Frost reckons with existential despair – you can’t quite dismiss the questions he raises as helplessly absurd. “Is there such a thing as a universal truth? Any lost secret to eternal youth?” As much as they’re able to wring control out of chaos, black midi don’t pretend to have any kind of moral authority – they’re just players in the same game. If there’s one thing to be gleamed from it, it’s that raising hell can be quite a bit of fun.

Album Review: black midi, 'Hellfire'black midi named their first album Schlagenheim, a word with no particular definition that can roughly be translated to “hit home” in German. (“The most important thing is that it’s absolutely meaningless,” guitarist Cameron Picton said in an interview.) The title of its follow-up,...