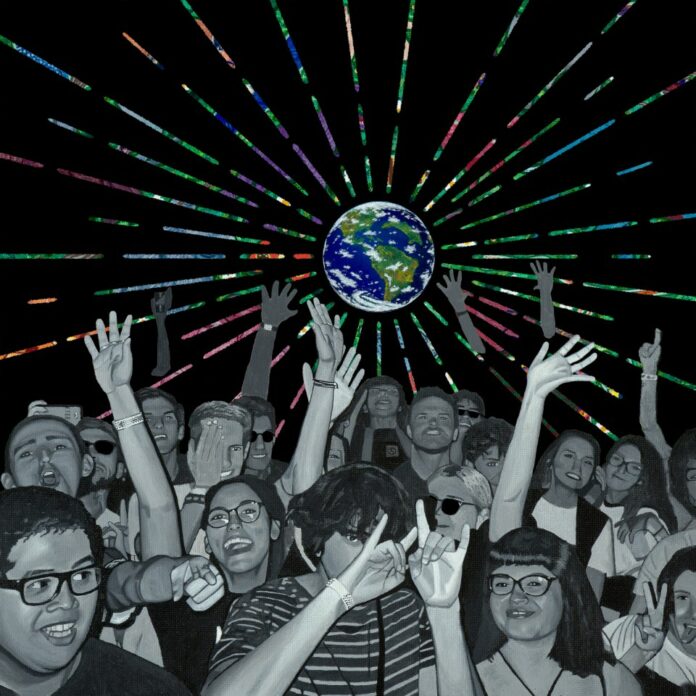 Superorganism’s ‘Everybody Wants to Be Famous’ presented its main subject more like a tantalizing idea than a reality worth pursuing: “I think that you and I/ Could set the world alight/ ‘Cause we’re all stars tonight,” Orono Noguchi sang with an earnestness that offset its playfully deadpan chorus and lyrics about feeling like a boss. When it was released as the lead single from their self-titled album over four years ago, the UK collective was one of indie pop’s buzziest new bands, but the song wasn’t exactly a reflection of their experience: its music video depicted a fictional band that rose to fame by making original music that resonated with a wide audience, which they subsequently lost by selling out to advertisers. The partial parallels were clear but intentionally blown out. To this day, Superorganism are a uniquely self-aware group who understand their place in the world – their growing influence, sure, but also their smallness in the grand scheme of things – and as familiar as they are with the rise-and-fall narrative that marks a lot of young bands, they remain committed to the goal of interconnectedness without compromising the quality of their music.

Enter World Wide Pop, the group’s much-anticipated second album, which confidently recaptures the infectious energy of their debut, as Orono puts it in one song, in “full screen high definition.” If Superorganism had a collage-like quality – stitching together buoyant hooks, half-spoken melodies, and an eclectic mix of samples and effects that made it feel as refreshingly modern as it did anachronistic – the new record is more filmic, seeking to expand the scale of their sound without sacrificing its homegrown aesthetic. They still sing about cosmic stuff like the stars and aliens and cyborg grilled cheese sandwich machines, the sci-fi themes smoothly fitting the album’s bigger scope – but the extended metaphor also feels like an attempt to grapple with their very real popularity in a crumbling world. Their debut might have sounded like a successful band from the past revitalizing itself through modern-day techniques, but World Wide Pop quite literally immerses us in the story of a band whose dreams have become true, suddenly cast into sharp focus.

Everyone from Orono’s idol Stephen Malkmus to J-pop star Gen Hoshino feature prominently on the record alongside peers like CHAI and Pi Ja Ma, while the first song even samples radio shoutouts from the likes of Elton John, Josh Homme, and NPR’s Bob Boilen. If it all comes off as a bit of a flex, it also encapsulates the disorienting experience of a group that had never even been in the same room when they put out their first album and was now touring the world and hanging out with their heroes. Orono seems more consumed than simply stoked by the overwhelmingness of it all: “Everything is changing, my spaceship’s started crying,” she sings on the song, which is called ‘Black Hole Baby’. The rest of the album similarly circles back and forth between feelings of collective euphoria and crushing loneliness, bubbling into an exhilarating form of chaos. ‘World Wide Pop’ is a straightforward dance anthem urging the people of Earth to just get along, while ‘It’s Raining’ thrives on the cartoonish humour Superorganism made their name on. There’s even a song sung from the perspective of fruit fly, silly and catchy enough to rival the one about being a prawn.

But though the whole album plays like an intergalactic party, it never really distracts from the personal concerns that plague its central character. Following the exuberance of the tite track is ‘On and On’, which is caught in a loop of mindless dissociation. ‘Solar System’, one of the album’s most memorable and charming moments, sees Orono seeking guidance from above – “Solar system, help me out” – placing its endlessness on the same level as her thoughts. But although the widescreen production often leads to more dynamic moments – hear how seamlessly the music in the background of ‘On & On’ mirrors the flow of words, like a montage, the faint throb of club music when she sings about a home party – it’s hard not to miss the intimacy that shined on Superorganism cuts like ‘Nobody Cares’ and ‘Reflections on the Screen’, which is somewhat lost. And while nearly every track on their debut was miraculously punchy and melodic, some of the more vibrant moments on its significantly longer follow-up, like ‘Teenager’ and ‘Flying’, feel a little bit weaker and amorphous.

Mostly, however, it’s a delight to hear Superorganism keeping it down-to-earth while trying to level up their sound and adjust to the terrifying nature of change. ‘Oh Come On’ takes place purely in the moment, focusing not on the realm of dreams or the planetary system but just the way the human brain is wired: “It’s a foreign country and I’m all freaked out,” Orono admits, “Need more serotonin, ramp me up.” It’s a song made for the live show, and even though it loses some of its potency here, it speaks to the band’s evolution from online phenomenon to IRL community. Whether or not you consider World Wide Pop an upgrade, it’s both reassuring and unsurprising that the band’s ethos has stayed intact: burdened by the uncertainty of today but finding ways to bond over it, too, just like they did before things got a little too real.

Album Review: Superorganism, 'World Wide Pop'Superorganism's 'Everybody Wants to Be Famous' presented its main subject more like a tantalizing idea than a reality worth pursuing: "I think that you and I/ Could set the world alight/ 'Cause we're all stars tonight," Orono Noguchi sang with an earnestness that offset...