Daniel Bachman has announced a new album titled Almanac Behind, which will arrive on November 18 via Three Lobed. The follow-up to 2021’s Axacan and this year’s covers collection Lonesome Weary Blues is led by the new single ‘Flood Stage’. Check it out and find the record’s cover art and tracklist below.

Bachman shared the following statement about the album:

The hiss of fire, the crack of thunder, and the silence of blackout. Howling wind, hard rain, and the force of moving water. Sounds which are inherently familiar to everyone on Earth experiencing climate breakdown and its effect on their communities. This is the music of Almanac Behind. ‘Flood Stage’ takes you right to the rising waters. The pulsing rhythm that rides atop the waves is created by slowing local AM radio static until the noise separates itself into distinct beats. Fiddle drones weave in and out of the river water, while gong-like guitar notes ring out at regular intervals. This melody was created by digitally cutting and pasting improvisational tape recordings to create an entirely new guitar piece, resembling broken debris floating downstream. The guitar is slowly overtaken by the sound of all of Virginia’s major rivers at flood stage, falling and crashing in on themselves, and cuts out just as the waters have breached the riverbank. 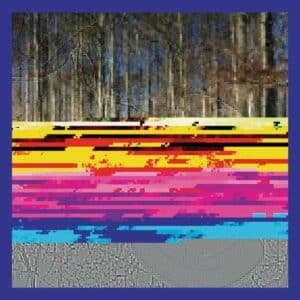