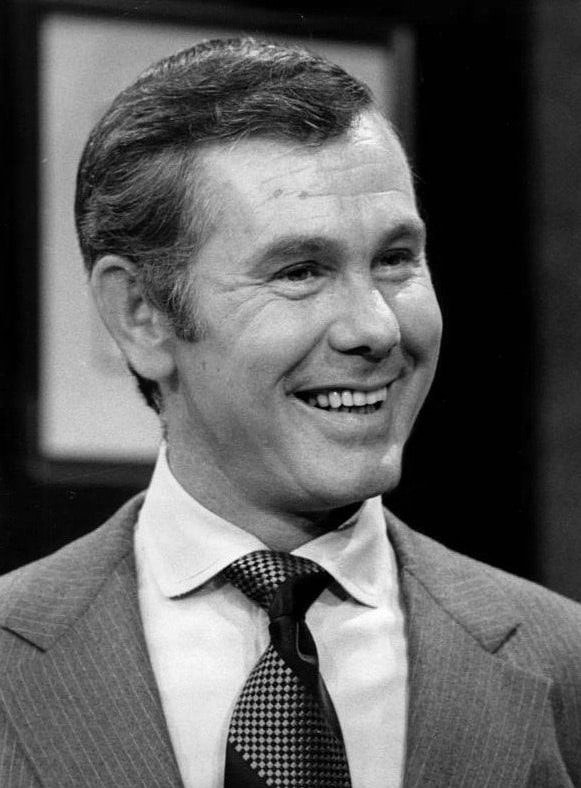 Johnny Carson famously helmed The Tonight Show from 1962 to 1992, appearing on American television screens for most of the week, in durations of ninety or sixty minutes per night. Television fame has always hinged on the fickle viewing tastes of the American public. Carson’s late-night primacy lasted for thirty years. This was unprecedented.

The unsentimental Carson seemed uninterested in burnishing his legacy. After 1992, he was basically never seen again. And in the years that followed his departure, the medium of television stretched and re-formed into an entirely new schema of Netflix, Amazon, HBO, streams. Carson’s Tonight Show—already lashed to an older demographic–quickly became a relic.

The ubiquitous monologue on late-night talk shows is taken for granted, but its lineage can certainly be traced to Johnny Carson—who did not, of course, invent the practice. But Carson’s barbed, topical–and very funny–monologues were an enormous factor in his success; much watched, must discussed. There is no reason that the current crop of late-night talk shows couldn’t dispense with the monologue and try something entirely different: opening with animation or music. Or the host could simply drink a latte and chat. This, of course, never happens. The barbed, topical monologue is de rigueur.

Monologues aside, Carson’s outsized significance, from today’s vantage point, is difficult to translate. For one, he was tethered for most of his run to the confines of the medium. Viewers were at the mercy of their TV dial, which was made up of three national networks and a potpourri of smaller stations.  Millions of people—larger than the population of many countries—sat in front of their television sets at an appointed time to watch Johnny Carson. There was a singularity to his fame that, today, doesn’t exist.

It is as if all aspects of Johnny Carson’s fame were doomed to obsolescence. His grandeur rendered him at the top of the television pay scale. A 1977 New York Times report noted that the king of late night was being paid the astronomical sum of approximately $3 million a year. By 1980, the paper reported, it was upwards of $5 million. The four principals of Seinfeld, by contrast, earned $1 million per episode.

The Tonight Show served as a comfortable, dependable touchstone.  I began my faithful viewing in high school. On family trips, I availed myself of Carson via the motel TV. I continued to watch when I went off to college. I watched when, subsequently, I moved to Brooklyn.

Viewing the show was witnessing a ritual: The same sprightly theme song, so recognizable to the public it could be hummed without explanation. Ed McMahon’s booming invocation of the night’s lineup, followed by the “Heeere’s Johnny!”—which became part of the vernacular–and then the namaste-like bow. Garish bandleader Doc Severinsen had his own idiosyncratic salute as well, this in the form of a jivey hand gesture. Then, of course, came the celebrated monologue, its conclusion transmitted nonverbally by Carson executing a simulated golf swing.

Much was made, at the time, of Johnny Carson’s Nebraska upbringing and Middle American persona. This was certainly a factor, but not, I think, really accurate. To me, he connoted that mysterious, adult world of elaborate cocktails, impeccable attire, central air-conditioning, beach cabanas. There is an odd bit of Carson ephemera in the form of a little book from the mid-1960s—purportedly authored by him—entitled Happiness is a Dry Martini. This does not conjure up images of Nebraska, nor Middle America.

To me, what he represented was utterly foreign and fascinating. Thankfully, nobody in my academically inclined family or the wider familial social circle would have deemed Happiness is a Dry Martini remotely amusing—had they even been aware of its existence. The idea that golf, Frank Sinatra, or cocktails would have been a part of my upbringing was as unlikely as suggesting that I had been raised in a carnival troupe. I certainly would have loathed all those things had they, in fact, been a part of my family history. And by extension, I probably would have detested Johnny Carson.

The Tonight Show was a window into terra incognita. I certainly had no desire to really explore that particular terra incognita; no ambitions whatsoever to swill martinis or listen to, say, Mantovani. A chunk of my Carson fandom had an attraction/repulsion component.

Johnny Carson was of such fame as to generate his own specific apocrypha. A celebrity actress—the iteration I heard was that it was Farrah Fawcett—came on the show and announced she was a lesbian. Jack Nicklaus’s wife—in other versions of the story, it was Mrs. Arnold Palmer—appeared as Carson’s guest, where he inquired as to any good-luck rituals she performed for her famous golfer husband. “I kiss his balls,” went the guileless response. Another star—Zsa Zsa Gabor was the way I heard it—appeared on The Tonight Show with a cat on her lap. “Would you like to pet my pussy?” this star inquired. “I would, but your cat’s in the way” was the Carson rejoinder.

Facts, of course, never get in the way of good urban legend. Nothing about these stories holds up in the least. It is completely improbable that Carson would bring on a golfer’s wife, of all people, as a guest. And nobody would bring a house cat onstage.

What these myths have in common is sexual content, of the louche, sophomoric variety. Carson bore no responsibility for the coarseness of the American public. The stories, though, speak to the discernible aura of misbehavior attached to the show. Carson was on late at night, exempt from many of the straitlaced diktats of network television. He connoted a certain risqué. There is a good deal of sexism to the show that does not speak well of Carson.

The particulars of his appeal have never engendered much in the way of analysis. How did Johnny Carson maintain an era-spanning prominence in the hyper-competitive world of network television and its hard-to-please audience? Salaciousness alone certainly wouldn’t have generated the show’s longevity, nor the cocktail ambience.

Johnny Carson, from all reports, was a difficult person who only felt truly comfortable sitting at his Tonight Show desk. This was strikingly apparent. There was a conversational ease and seeming spontaneity that no television host has ever been able to replicate. Certainly, one would appear on The Tonight Show to plug something or other, but his interviews mostly transcended the obvious conversational gambits of peppering the guests with one question after another.

Carson often divulged a nugget or two about his past, or an offhand observation. The sense was that he was speaking to you, the viewer. This has also never been replicated.

What is less remembered is that his guest lists were also culled from the non-famous citizenry: an exceptional kid, a very old person, someone with an oddball story. Animals as well were a part of the show’s process, with the elegant Carson interacting with a variety of unpredictable representatives from the animal kingdom. In those cases, the spontaneity could not be feigned.  The Tonight Show also featured Carson appearing in semi-regular comedy skits. Many of these were various stock characters that he repeated throughout the years. It was a tried-and-true repertoire that—like the show itself–ranged from the hoary to the very funny. And Carson was very, very funny.

Carson’s Tonight was part variety show, part Chautauqua circuit. There were jokes that only the adults would understand. There was Hollywood glamor. His appeal had deep roots, part of a lineage that predated television.

Jay Leno became host of The Tonight Show in 1992. This was a generational shift on many levels. The many-times married Carson comported himself like a grandee. He had three sons; it is doubtful he played catch with them or monitored their grades. (One son, tragically, died in an auto accident, following in the macabre tradition of Hollywood sons meeting untimely deaths.) Carson had been a notorious drunk. He smoked on set, then transitioned to sneaking cigarettes during commercial breaks. Besides his astronomical compensation, much of his contract negotiations involved increasing his vacation time, bringing on more guest hosts. Eventually the show was whittled down from ninety to sixty minutes.

The hardworking, childless Leno was divorce-free and (presumably) happily married. He was a workaholic who threw himself wholeheartedly into the helming of The Tonight Show. Carson would have taken two-hour liquid lunches. Jay Leno would have brown-bagged it at his desk. The yuppie careerist replaced the hedonistic old order.

I’ve seen clips of Carson on YouTube. The shows exist on a variety of internet options. Viewing it in this sliced-and-diced format takes it completely out of its original, immutable context, rendering only an approximation of the original viewing experience. And much of the material is, yes, very dated.

For all the years I spent watching Johnny Carson, his death in 2005 barely registered. His existence to me was within the confines of The Tonight Show. I had scant interest in the man himself—which was, no doubt, as the hyper-private Carson had intended. In essence, he had died in 1992, the day after his final night as host of The Tonight Show.