White Lung are back with news of their next album, Premonition, which is billed as the Vancouver punks’ fifth and final LP. The follow-up to 2016’s Paradise lands on December 2 via Domino. To accompany the announcement, the band has shared two new singles, ‘Date Night’ and ‘Tomorrow’. Both tracks are accompanied by visuals directed by longtime collaborator Justin Gradin. Check them out below, along with the album artwork and tracklist.

Commenting on ‘Date Night’, frontwoman Mish Barber-Way said in a statement: “I felt like that part of my life was expiring, so I was projecting those angry and scared feelings out onto the city of L.A. because it’s safe and comfortable to live in your anger instead of being self-reflective.”

“‘Tomorrow’ is the song I wrote when I found out I was pregnant,” Mish added. “There was a very serious understanding that life would be different forever and I was relieved to welcome that change.”

In an interview with Melissa Broder, the person behind the @sosadtoday Twitter account, Mish elaborated on the origins of Premonition:

I was writing while I was pregnant with my son, not knowing that I was having a boy, so it was strange because it was the first time I had to write sober. It was sad that I had never sung a single vocal track without alcohol. I was also going through pregnancy hormones and major body changes. I felt like all my creativity was being sucked into the fetus. I couldn’t write. The words weren’t coming to me like they used to. It was like this baby inside me was taking up everything I had. I was consumed. I became fixated on that feeling, so the album is about the transition to motherhood, pregnancy, and the massive life change that I embarked on during the lull between our last album. The first three songs were written, then I found out I was pregnant, and Premonition became about that.

Of working with longtime collaborator Jesse Gander, she said:

We love working with Jesse. He has known our band through our entire existence. The intimate story of pregnancy on this album also deeply involves Jesse… he was the first one to know I was pregnant, before my husband!

We wanted to return to our punk roots as far as production goes, but we also wanted to take our time and record in chunks. Paradise was made in Los Angeles under a tight time limit and Lars Stalfors did an incredible job polishing those songs with us into beautiful, gritty glitter, but this time around we wanted to be able to enjoy the luxury of time…and that really is an understatement considering how long it has taken this record to finally come out. Kenneth went back and did a lot of guitar work. Sonically, this is a very busy and complex record. This album on a whole is very journal-esque. I needed to barf it out and be uncool. Afterall, I’m a mom now. It’s alright to be uncool. 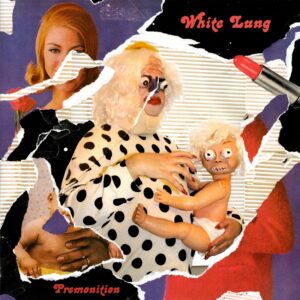