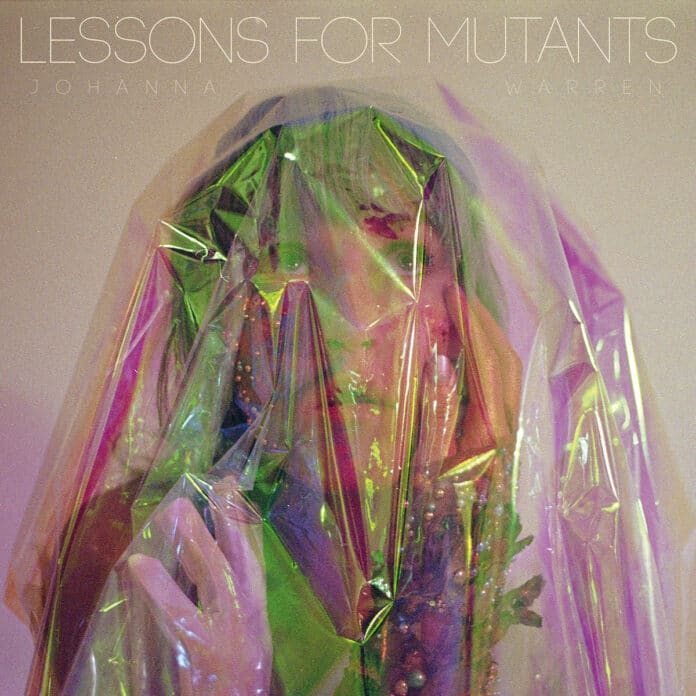 Two years ago, Johanna Warren’s Chaotic Good painted a self-portrait of an artist in turmoil. From the cover artwork – Warren’s contorted body sprawled across the floor in a red dress – to the agonized vocal performances, the album conveniently aligned with the bleak mentality of the early pandemic moment it released into. Her music felt, for the first time, eruptive. Nothing was repressed, she put everything on the table. ‘Twisted’, Chaotic Good’s soul-crushing centerpiece, found Warren testing the limits of her voice, screeching fearlessly. Her words were blunt and unlyrical: simple gateways into a no-holds-barred vocal performance.

Now, Warren returns with Lessons for Mutants, a calmer and more restrained follow-up record. With most of the songs written during a period of medical recovery and under doctor’s orders to “do nothing”, the album traces familiar themes of loss and defeat. Yet here, Warren gravitates towards a melancholic acceptance of life’s whirlwind, moving beyond Chaotic Good’s intense affective expressions. At times the restraint is haunting. At others, it makes the album feel distant and uninvolving. Lessons for Mutants walks a fine line, simultaneously one step forward and one step backwards for Warren.

‘I’d Be Orange’, the deceptively cheery opener, is a modest rocker peppered with old-fashioned backing vocal “ooo-la-la”s. It’s rollicking fun, boasting ironic and (sometimes self-)deprecating jabs. “Time to swallow bitter pills/ Rectify the countless ills/ I’ve committed in the name of healing,” she sings, acknowledging the mess of contradictions inherent in moving forward. Yet at the same time, the track feels overly polished. Anonymous production plagues most of the rock-oriented tracks, also including ‘Piscean Lover’ and ‘:/’. Meanwhile, more inspired decisions glimmer in the background of quieter tracks. ‘Oaths’ glistens with slow, ethereal percussion and fluttery violin textures from Raven Bush (nephew of Kate Bush). Unfortunately, the mix leaves Bush’s contribution (the highlight of the song) buried low, like a faint treasure only for a focused ear.

On Mutants, Warren delivers occasional moments that recall Chaotic Good’s commitment to unleashing the full potential of her voice. On ‘Piscean Lover’, a growly and distorted grunge turn, Warren lets herself shout. But even at her most wild and uninhibited, Warren’s rawness feels a little self-conscious. By and large, the production and vocal performances feel subdued (though credit to Warren for trying her hand at yodeling on ‘Good Is Gone’). Yet there’s no shame in subdued art. On ‘Involvulus’, the finale, Warren’s remove becomes the song’s greatest asset. The gaping spaces between notes become as important as the notes themselves. Here, restraint draws us into Warren’s meticulously-told story, narrated by a trio of strings, piano, and voice.

Pain is omnipresent across these songs, but it always feels delicate, sidestepping grand catharsis. On ‘Tooth for a Tooth’, Warren’s voice is replaced by a whistle playing the same melody: a substantial turn from Warren’s penchant for blistering crescendo. In fact, the album’s final lyrics drop a heartbreaking allusion to Orpheus’ fatal glance and then, abruptly, the album ends. While Mutant’s stories are packed with drama and emotion, the deliveries are somber and simmering. This approach bypasses her knack for gritty self-exorcisms, finding a home in quietude and restraint.

Album Review: Johanna Warren, 'Lessons for Mutants'Two years ago, Johanna Warren’s Chaotic Good painted a self-portrait of an artist in turmoil. From the cover artwork – Warren’s contorted body sprawled across the floor in a red dress – to the agonized vocal performances, the album conveniently aligned with the bleak...