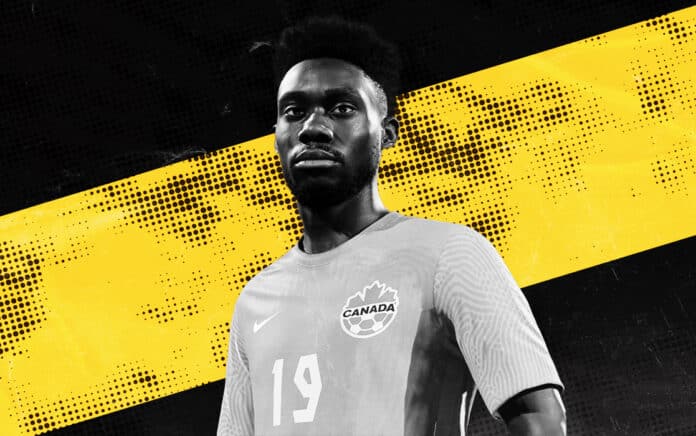 With so many exciting players coming every year and the change of popular styles, the left-back position has never been more exciting in the game of football. In this list of the best young left-back wonderkids, we look at some of the most promising football talents in FIFA 23 and why you should add them to your dream team.

Alphonso Davies is no stranger to FIFA fanatics. In fact, he is so good that he ends up in pretty much every dream team that’s building for now and the future. As a footballer, Davies has established himself as arguably already the best in the world in his position. All of this at the young age of 21. With over 87 appearances for Bayern Munich and 34 appearances for Canada’s national team, Davies is no joke and certainly a wonderkid.

In terms of the game, Davies is definitely respected by the EA Gods, being rated an excellent 84 overall rating with a positive potential of 89. Though a 90-plus rating could be argued for Davies, 89 is undoubtedly a world-class level. Davies is perfect for fast-paced formations and those in need of a pressing player. If you’re playing 4-4-3 with a constant pressure system that relies on a quick counter-attack, then Davies is the player for your side. Davies has a market value of €60.5 million which will naturally rise with his progression.

Though not primarily a left-back, Gvardiol can be played and switched from CB to LB, making him adaptable — perfect for the new generation of Croatia’s up-and-coming talent when players like the legendary Modric make way. As a pro, he made his debut for RB Leipzig back in 2020, making 37 appearances and scoring two goals. During that time, Gvardiol was also on loan to his former team Dinamo Zagreb. For the national team, Gvardiol made 12 appearances with one goal over the tiny San Marino in their 10-0 win (their biggest ever win).

Before we get into stats, Gvardiol has finally got a face scan in the game, making him even more attractive for serious career players. In FIFA 23, he is rated a solid 81 and can quickly rise to an 89-rated player. With the age of 20, he certainly doesn’t lack aggression and defensive stats in the game and can come up for corners with 77-heading accuracy. Speed-wise he can run quite fast with an 80 acceleration and 84 sprint speed. As an established player in the game, Gvardiol has a market value of €53 million which will rise as he gets better. We should also mention he is only 20, making him a long-term solution for the top Premier League, Bundesliga, and Ligue 1 sides.

Saseta is another exciting player that can be adapted from LM to LB, depending on your formation and tactics. With a quite well-rounded stat pallet, Saseta has established himself as a solid player in the English Premier League, having played 35 games for Brighton back in the 2021-22 season. As of 2022, Saseta has played six games for his new side Chelsea. Internationally, Saseta is yet to be fully established, having only played one game as a 24-year-old for the Spanish side.

When it comes to playing with Saseta, a pressing game works well with him as he has a high working rate defensively and offensively. Potential-wise Saseta reaches a solid 85 with an initial overall rating of 81. Transfer value of Saseta is a respectable €34.5 million. He also has a face scan and has a release clause of €66.4 million; if you don’t want to negotiate and simply sign him from the get-go.

There is no doubt that pace is the key element that makes Mendes tick. Like Davies, he is exciting on that front, though arguably not as well cemented within the football globe. Offensively, he isn’t as exciting as some of his counterparts but certainly has a substantial defensive stat line that grows with his progression in the game. Mendes starts with an overall rating of 80, which would make him good enough even for some of the top sides in the Prem or Champions League regulars (Unsurprisingly, he plays for PSG). Mendes really becomes more exciting when you realise his potential is an astounding 88, which is one below Davies, making it a harder choice between the two as Mendes’s initial market value is much lower at €44 million.

Let’s step away from the expensive lot and find something for those battling promotions to the top leagues or those simply wanting a player that can become their regular in the next few seasons. This is where the German Luca Netz steps in. The Berlin-born 19-year-old is no joke and has already made appearances for the Germany U17 and U21 sides. Club-wise, Netz currently plays for Borussia Mönchengladbach, who finished 10th in the Bundesliga last season (indeed not the best season for them). He has only made five appearances for the first team, which he joined from the second team, where he played one game and scored one goal.

With an overall rating of 73, Netz doesn’t seem as exciting as Davies or Mendes. The overall stats suggest a mid-table team placement in any of the top 5 leagues of the world. Yet, he can certainly grow into a beast with a huge potential jump of 85. Netz is most exciting because of his potential and the fact that his market value is only…€7 million. Also, he has a real face scan.

Another relatively underrated and the last piece to our guide to the best young left-backs in FIFA 23 is Aaron Hickey, the Brentford left-back. Brentford is known to have signed some truly underappreciated players that fit well within their mould, and Hickey is undoubtedly one of them. The Scottish international, who has already made seven appearances for his country, has already played throughout Europe at the age of 20. Hickey made his debut for the Scottish side Hearts in 2019, scoring one goal and appearing 24 times. In 2020, he signed for the Italian Seria A side Bologna for £1.5 million and made a respectable 47 appearances. In 2022, he made his latest move to the Premier League side Brentford which is currently managed by the Danish theatrical manager Thomas Frank.

In terms of FIFA 23, Hickey is certainly promising with a great potential of 85. With players like Kieran Tierney competing for the same spot, it certainly makes the Scottish national team an exciting prospect in the next few years. Though it should be mentioned either of them can switch to RB. Hickey’s overall rating is a little low if you’re looking for a straightaway starter for a top side like Liverpool, Real Madrid, or even Manchester United. Sadly, he only starts at the rating of 75. But this also means Hickey is valued at a relatively cheap transfer value of €12 million with a wage bill of €28K. In terms of downfalls, Hickey does not have a real face in the game yet.