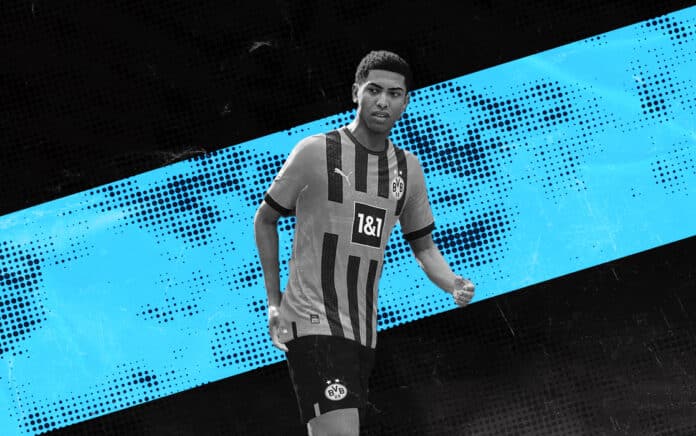 The left-midfield and left-wing positions are known for speed and crossing ability. They are also key positions in counter-attacking and gegenpress football. In this guide, we’ll look at the two positions and some of the most exciting up-and-coming players in the positions on FIFA 23.

While primarily a centre-midfield player, English international Jude Bellingham can adapt to the LM position. Possessing solid pace, neat passing and wonderful dribbling ability, he has established himself as one of the ones to watch in the European football sphere. At only 19, he has already made over 70 appearances for Borussia Dortmund and has played over 41 games for his previous English club Birmingham City. The same club believed in his ability so much that they retired his number 22 when he signed for the German side. Internationally he has become a safe addition to Gareth Southgate’s England side, having made 17 appearances since his debut in 2020.

In terms of FIFA, Bellingham is a well-rated player with a rating of 84 and an excellent potential of 91 — making him, in theory, one of the best rising players in the world. Transfer-wise, you’ll be looking to pay upwards of €81 million for him. However, if you’re lucky enough to have lots of money lying around, you can also opt for a release clause of €154.9 million. He is a well-rated dribbler that is similar to players like Kroos and Thiago.

Ansu Fati is becoming a rising star in the Barcelona side having already scored 17 goals for the team within 49 appearances. The Guinea-Bissau-born player has become a starlet since his days in the youth academy of the famous Barcelona, becoming one of the youngest to wear the number 10 jersey for the Spanish team. Internationally, Fati was granted Spanish citizenship in 2019, renouncing Bissau-Guinean citizenship. This made him eligible to play for Spain, which he started in 2019, representing Spain’s U21 side twice. Since 2020, Fati has made four appearances for the senior Spanish national team, scoring one goal.

In terms of the game, Fati is relatively underrated, starting with an overall rating of 79 — certainly a weak spot if you’re looking to utilise him from the get-go. However, Fati has immense potential at 90, and due to his starting rating, his market value is only €38 million, making him accessible to middle-table teams across the Premier League, La Liga, and Seria A. As a player, Fati’s strength lies in his movement having superb acceleration, sprint speed and agility ratings. Fati can also finish the and has solid dribbling assets to his game. However, if you’re looking for a defensive left-winger, then Fati is not your guy.

Another superb player to come out of the notorious Barcelona academy is Gavi, the 18-year-old midfielder who has already made over 42 appearances for Barça. Like Fati, Gavi has made quite a few appearances for the Spanish national team and has established himself as one of the key players in the Barcelona side since joining the senior team in 2021. And while a centre-midfield player at heart, he can be utilised on the right and left wings of any given formation.

As a player in the game, Gavi starts with a rating of 79 but can rise to a potential of 88. Like Fati, he is similar in market value but can be bought with a release clause of €81 million. Gavi’s strengths are within the passing and dribbling ratings. He has solid movement making him a solid feeder of the ball, and style-wise reflects the legends of Barcelona, such as Xavi and Iniesta.

Bynoe-Gittens isn’t yet a well-discussed name but has already had a promising start to his career, making his debut for the Bundesliga side Borussia Dortmund back in April of 2022 against VfL Wolfsburg. The London-born Englishman has also made appearances across the England youth national teams, including the U15, U16, U18 and U19 sides.

The magic with Bynoe-Gittens is that within the game, he only starts with a rating of 67, making his market value a mere €2.8 million. That means even League One sides in England can acquire him if they want a long-term player within their side or someone they can buy and flip within a few seasons for a significant return on investment. Potential-wise he is 87 rated, making him an exciting prospect if you’re looking to build the next top-team of English players in FIFA 23.

Polish player Nicola Zalewski is becoming a hit among Roma fans, having already made 23 appearances for the side. While born in Tivoli, Italy, to two Polish parents, Zalewski doesn’t hold Italian citizenship and, in fact, has represented Poland since the U16s back in 2017. After making various appearances across the youth ages for the Poland national team, Zalewski made his senior international debut in 2021 against San Marino, gaining an assist in his first appearance. Since then has become a fan favourite and among the several exciting Polish youths to storm the football colosseum in the last few years.

When it comes to the game, Zalewski has a solid rating of 74, which makes him a reliable substitute option for many sides in the first few seasons of signing him. Yet, his potential of 86 is what gets people eager. With impressive movement ratings and clear room for growth, Zalewski is one of the cheaper talents to get in the left-midfield position with a market value of €10 million. However, Zalewski can be snapped up for more if you’re looking to skip the first negotiation by breaking his clause, which comes at €19 million.

Croatia seems never to stop when it comes to producing high-calibre players. Biuk is undoubtedly one of those players. At only 19, Biuk has made appearances for many of the Croatian youth national sides, including the U21 side, in which he made six appearances since 2021. Currently playing for HNK Hajduk Split, Biuk is yet to make his big move to one of the top sides in Europe and prove himself among the best, but he certainly will do so if he keeps performing for the Croatian side, having made over 37 appearances for the side.

Despite his solid 70 rating, Biuk has room to improve with a potential of 85. His strengths lie in his movement and dribbling. As a player, he possesses the technical dribbler trait within the game and can be bought for just under €4 million transfer value. Biuk also has a release clause within a game which comes at €10.7 million. Sadly, Biuk has no real face in the game.