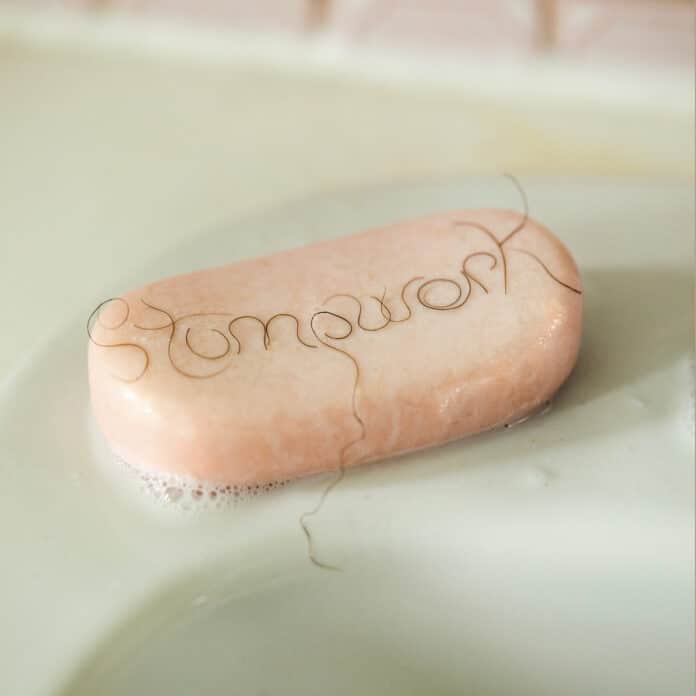 Brimming underneath the apathetic sprawl that permeates Dry Cleaning’s music is an extreme sensitivity to the world. As anyone who was at least intrigued by the London band’s remarkable 2021 debut New Long Leg will be quick to point out, what they brought to the table is more than a joyless recreation of what countless post-punks have done before – thanks in large part to vocalist Florence Shaw’s idiosyncratic lyrics and inimitable delivery, but also the way Tom Dowse’s guitar, Lewis Maynard’s bass, and Nick Buxton’s drums sludged and coiled around her. The album was far from monotonous, and if you’re willing to pay close attention, you might end up discovering different shades and colours in it. Which is why, when I saw them live under the heat of the early June sun at Primavera Sound 2022, I thought it was pretty funny that the screen behind them drained into black-and-white halfway through a song, as if to better match their moody (but actually pretty animated) performance. If they had gotten to play more material off their upcoming album, the environment might have actually seemed like the perfect fit – even to someone not too keen on following the trail of Shaw’s disaffected musings.

Stumpwork, Dry Cleaning’s sophomore album, doesn’t stray too far from the bizarre, brilliantly hypnotic sound the group conjured on New Long Leg. Shaw’s writing once again anchors itself in the push-and-pull of precision and distraction, her perceptiveness countered by beguiling non-sequiturs stretched further by the steady tangle of instrumentation. But just as her lyrics take on new meaning when you register the context, the subtle differences between the two records reveal themselves when you zoom out. More than sound or structure, it’s the temperature that’s shifted; a New York Times profile likened the debut to “a wet, wintry day” and noted the new album has the “dazed, heat-hazy vibe of a drunken summer afternoon,” which is a fairly accurate assessment, even if it undermines the complex ways that dynamic plays out across these 11 tracks. The progression of ‘Driver’s Story’, for instance, is more reminiscent of their earlier material, which contributes to the irony of Shaw reiterating the sort of critical language they’ve surely grown accustomed to: “It’s cool stuff but we want different styles,” she notes dryly, before offering a sly twist: “One can only wait and not see.”

You don’t even have to look that hard, only around: ‘Driver’s Seat’ is sandwiched between the shimmering, locked-in groove of ‘Gary Ashby’, which showcases Dry Cleaning’s melodic capabilities, and the scorching, distorted funk of ‘Hot Penny Day’. Each palette serves a distinct purpose. Shaw has described ‘Graby Ashby’ as “a lament about a pet tortoise, escaped as a result of family chaos,” but in the song’s bright bubble, that chaos remains out of view, even for a keen observer. It’s more something to be felt through the eyes of a child, and it’s this feeling that Stumpwork traces, all the way to the album’s conclusion, which frames child-like curiosity as the ideal lens through which to experience the world. Although the jangly ‘Kwenchy Kups’ obscures its narrative subjects, a certain giddy innocence is part of the thrill, as the simple anticipation of seeing otters is enough to dispel the anxiety of everything else: “Things are shit but they’re gonna be OK.” (The rub? “There aren’t any otters.”)

‘Hot Penny Day’, meanwhile, turns disparate observations into a striking display of Shaw’s surreal yet intuitive lyricism, which unfurls within the confines of a wandering mind but reflects much more about society at large. Shaw wrote much of it at a flea market, so at least the first lines scan as sincere – “If I could live across the road from a boot fair/ Wouldn’t that be something” – but the rest of the song relishes in blurring the line between diaristic and imaginative detail, or just pure wordplay. The band is fully tuned into the intensity that others might find absurd or alienating; when she relays confessions like “Our relationship/ Well, it’s not what you think,” everything comes to a boil. But they still know when to pull back. On the title track, Dowse trades the crunch that marked New Long Leg for a cleaner sound punctuated by reverb, while Shaw intones, “What I really love is to not use something to its full capacity/ Not full power/ Half its potential/ Medium.” This penchant for restraint justifies itself on the following track, ‘No Decent Shoes for Rain’, where, just as Dowse’s guitar starts to sizzle, the song deflates – a glare turned to a sigh.

When Dry Cleaning were lumped in the category of talky English post-punk bands alongside acts like black midi, Squid, and Black Country, New Road, their sound seemed more in line with what the term signified, if only because some of those other bands ventured way beyond those bounds. Though Stumpwork sticks to the band’s strengths rather than redefining their approach, its versatility is easy to savor and harder to ignore. Who knew that Dry Cleaning could sound that much like the Radio Dept., and on a song called ‘Conservative Hell’, no less? Yet experimentation is less the goal than a means of getting closer to the core of a song. ‘Don’t Press Me’ is surprisingly upbeat, but it’s most exciting for capturing the band’s dynamics in the span of less than two minutes.

‘Liberty Log’, on the other hand, stretches gloriously across its 7-minute runtime, growing more claustrophobic as Shaw entertains herself on a streaming service. “It’s a weird premise for a show, but I like it,” she repeats, which is how the friend who’s tagging along to the Dry Cleaning gig might respond to your pitch. This doesn’t escape Shaw. “If you like this you may like/ Weird weird weird weird,” she trails off, before clapping back: “You’re weird!” The song rambles into a dizzying cacophony, and by the time the final secret is revealed – “For a happy and exciting life/ Locally, nationwide or worldwide/ Stay interested in the world around you” – it sounds labored, muted, trademarked. Still, it feels like their motto.

Album Review: Dry Cleaning, 'Stumpwork'Brimming underneath the apathetic sprawl that permeates Dry Cleaning's music is an extreme sensitivity to the world. As anyone who was at least intrigued by the London band's remarkable 2021 debut New Long Leg will be quick to point out, what they brought to...