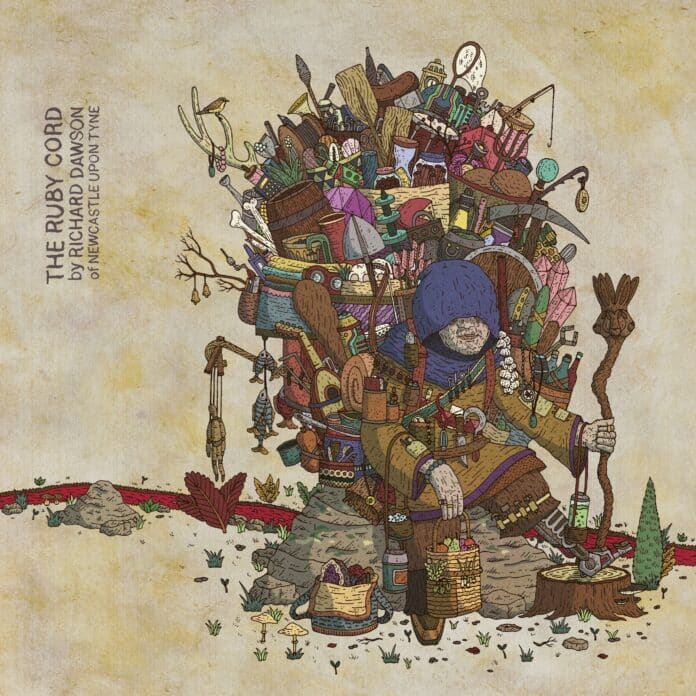 Richard Dawson’s music is, by nature, enigmatic and wildly exploratory, but he gives us ample time to acclimate to its ever-changing environment. During the first act of the opening song of his new album, The Ruby Cord, the Geordie singer-songwriter, accompanied by longtime collaborators Angharad Davies on violin, Rhodri Davies on harp, and Andrew Cheetham on drums, gently forges ahead in pursuit not so much of form as texture, absorbing every small bit they can find in order to grow outward. Their presence is faint at first, then searching, then pleasant; more than ten minutes go by before Dawson’s voice rises, in a state not so misaligned with that of the listener: “I’m awake but I can’t yet see.” While ‘The Hermit’ is accompanied by a short film premiering in cinemas across the UK, the music alone is a feast for the eyes, stuffed with peculiar and naturalistic imagery that triggers the senses and boggles the mind. There are strange twists and turns across the track’s 40-minute runtime, but Dawson is an inviting storyteller as much as he is an ambitious and idiosyncratic one. It’s overwhelming, but it never leaves you behind.

As if stepping on fertile soil, Dawson subtly builds out a narrative, letting it sprawl and often pausing in wonderment. Even if you can’t tell exactly what it’s about, you’re inclined to follow and stand alongside him, though it’s most rewarding if you’ve logged the first two installments of the trilogy that The Ruby Cord completes. It began with 2017’s Peasant, a strikingly pastoral and at times discomfiting concept album set in the dark ages; when he shot back into the present with the expansive and grotesquely humorous 2020, it only had the effect of breaking the illusion of a distant past. Dawson’s unsettling, apocalyptic vision stretches onto the new album, which ventures half a millennium into the future. Yet even as he trades the social realism of 2020 for a fantastical lens more akin to sci-fi, his focus remains on the persistence of the human condition along that thread of time, not its erasure. As knotty and challenging as the arrangements of ‘The Hermit’ – and The Ruby Cord as a whole – can get, it’s easy to empathize with the protagonist who is subsumed by augmented reality to confront both a remarkable abundance of information and unimaginable grief.

It helps that, stylistically, there are no flashy attempts to present this as a markedly futuristic record, grounding it instead in a subjective experience that feels adventurous yet familiar. Sure, there’s the odd synth that creeps through the surface of ‘The Tip of an Arrow’ when Dawson sings about the ability to display “A bounty of data/ On the quivering cavewall of their eyeball/ At the merest flick of a lash,” but the song is about a father refusing to let his daughter conform with the times, so of course it’s a chugging metal riff they adopt as the language of resistance. Dawson is a master at using the broad signifiers of prog-folk in inventive new ways; listen to the squelchy bass and dissonant strings that gurgle through ‘The Fool’. But he’s also smart enough to center the song in a universal truth that’s delivered with the utmost sincerity alongside lush, stately instrumentation: “Love is old, older than the sun/ A dreadful magic more powerful than evil.” Expect no less from the man who tearfully pronounces the word “ommatidia.”

Even when the details of the world he’s envisioning seem vaporous and elusive, Dawson approaches it with nothing short of poetic rapture. It’s why “dystopian” is an ill-fitting descriptor when it could easily feel customary given the subject matter and sonic palette; “apocalyptic” barely cuts it. It’s a sense of humanity that rings through these songs, or at least the struggle of reaching for it. Take the pristine ‘Museum’, which introduces us to “An archive of futility/ Miles of hard corridor/ Bustling with projected people/ Bound in loops of light forevermore.” Yet in his careful choice of words, the narrator relays not a cold list of facts about these people but a whole range of emotional expression: fear, contemplation, excitement, violence, sorrow. “Distant memories…” he mourns. In his hands, they feel not projected but movingly, tangibly alive.

Album Review: Richard Dawson, 'The Ruby Cord'Richard Dawson’s music is, by nature, enigmatic and wildly exploratory, but he gives us ample time to acclimate to its ever-changing environment. During the first act of the opening song of his new album, The Ruby Cord, the Geordie singer-songwriter, accompanied by longtime collaborators Angharad...