Caroline Polachek has announced the details of her next album: Desire, I Want to Turn Into You arrives on February 14 via Perpetual Novice. Today’s announcement comes with the release of the new single ‘Welcome to My Island’, which was produced by Dan Nigro, Polachek, Danny L Harle, and Jim-E Stack. Check it out below, along with the album’s cover art (photographed by Aidan Zamiri).

“While I was writing this song, I almost saw this from a point of view of egg trapping the sperm… It’s maniacal, huge ego,” Polachek told Zane Lowe on Apple Music 1. “This is the brattiest song I’ve ever made. I needed to go full brat rant mode. I don’t think attitude wise I’ve ever really gotten to tear into this feeling of conflict and frustration. The record is dealing with catharsis and repression a lot. And I think setting up that tension on track one was part of the mission statement.”

She continued: “‘Welcome To My Island’ was the first song written on this album. The funny secret about this one is it was actually written for is it was written for Pang, my last album. Which makes it by far the oldest song on the album. As soon as I wrote this song I knew that this was actually not for Pang, it was the start of something new and now it literally is. It’s track one on my new album and the title just feels so emblematic of that kind of all encompassing feeling of being in love and being in a state of passion… It doesn’t even need to be a romantic kind of love. It goes beyond wanting to be with someone… It’s about wanting to be subsumed.”

Desire, I Want to Turn Into You will include the previously released songs ‘Billions’ and ‘Sunset’. Caroline Polachek’s debut solo album, Pang, came out in 2019.

Desire, I Want to Turn Into You Cover Artwork: 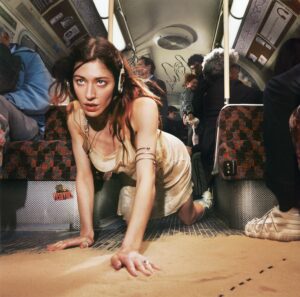