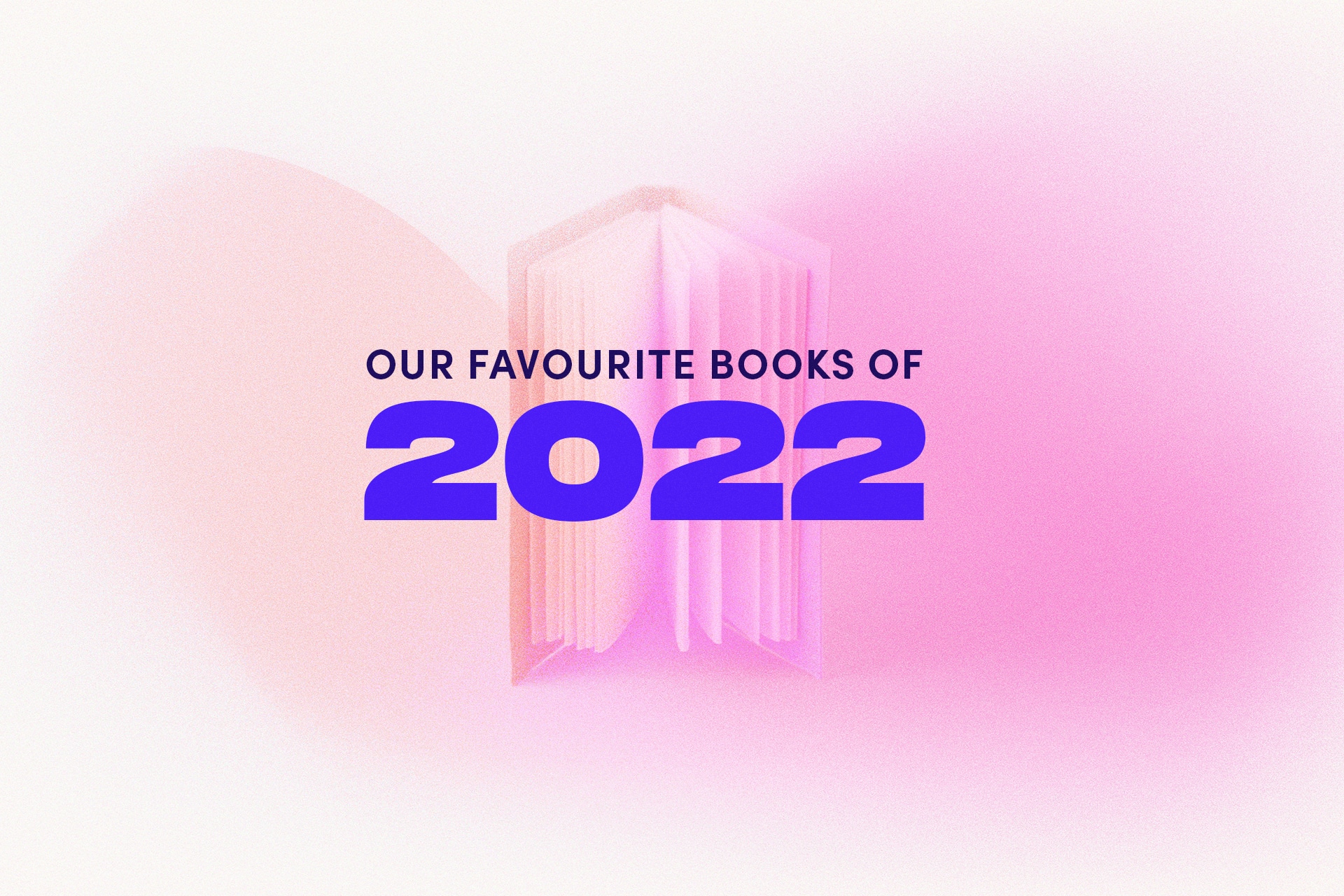 Staff Picks: Our Favourite Books of 2022

This year, I read more books than any other, whether it be due to increased free time I had in post-graduation life, or signing onto Our Culture to interview authors of new books. Either way, there have been some incredible debuts, follow-ups from notable authors, or fun novels that we were just glad to spend some time with.

Our Culture’s Svetlana Sterlin and Sam Franzini count down their favourite books of the year.

The fourth volume of Alice Oseman’s hit graphic novel series. Heartstopper, is a continuation of the heartwarming love story between teenagers Nick and Charlie. This instalment deals with some heavy topics, but approaches them with the same tactfulness and sensitivity as the first three volumes do. In particular, Charlie is facing some mental health struggles while realising that he’s in love with Nick—but he’s unsure if Nick feels the same way about him. As always, Heartstopper: Volume Four retains the comic’s sense of levity and wholesomeness, making for a well-rounded and enjoyable reading experience.

Cleopatra and Frankenstein by Coco Mellors

This debut novel is a New York-set romance that begins on New Year’s Eve of 2006. 24-year-old British artist Cleo meets Frank, a forty-something marketing executive, and within months, they’re married. But it’s not all smooth sailing for the pair as they begin to deal with the consequences of their age difference, their swift engagement, their peers’ opinions of their relationship, and their own past traumas. Written in gorgeous, evocative prose, this is a vibrant and ever-changing story, thanks to its use of multiple narrators and locations.

Exactly As I Am by Rae White

The second collection from Australian poet Rae white, Exactly As I Am is a celebration of gender euphoria written from a non-binary transgender perspective. These poems are playful, defiant, non-conforming, and critical. Witty and sharp, these poems are accessible for a range of readers, but experimental enough in their form to challenge more experienced consumers of poetry. Exactly As I Am pairs perfectly with White’s award-winning first collection, Milk Teeth, which explores similar themes.

Favourite of the Year: The Jaguar by Sarah Holland-Batt

Holland-Batt’s third poetry collection is a deep insight into grief, love, and life—specifically, its fragility and fleetingness. The Jaguar’s titular symbol sometimes acts as a metaphor, and sometimes is an idea as elusive as the creature that slinks through the book’s pages, making appearances seemingly at random, each time reincarnated in a different form. Death and illness permeate these poems; the opening and closing elegies mourn the loss of the poet’s father, even before his passing. The Australian poet utilises lyrical language, powerful imagery, and airtight mastery of poetic form to bring these verses to life and move the reader.

Claire-Louise Bennett’s lurid, meandering second novel follows an unnamed narrator, through what the reader assumes to be her life, but to be honest, is not certain. Some of the parts of the novel — the first and last, specifically — are written in a stream-of-consciousness style, with sentences running for over a page and paragraphs that run for multiple. Be warned: it is definitely a book for a certain type of reader, one that doesn’t mind if there’s no logical conclusion, beginning, middle, end, or palpable logistics. However, its greatest strength is Bennett’s devourable writing style, going as in-depth to spend around 100 pages just about books the narrator has received as gifts or lent out. Odd, liminal, and blending fact and fiction, Checkout-19 is likely to be either one of your favourite or least favourites of the year.

Power and relationship dynamics are at the heart of Alyssa Songsiridej’s debut novel, Little Rabbit, following an unnamed novelist who falls into an intense relationship with an older choreographer. They travel to his home in the Berkshires, enjoying weekends away, and return back to Boston to face scrutiny from the narrator’s friends and family. No one seems to understand their relationship, but the narrator finds it impossible to describe that she just wants someone to meld into, to make her invisible. Sex with the choreographer achieves this goal, but sometimes, her quest to be erotically diminished goes too far.

Our Wives Under the Sea by Julia Armfield

After coming back from a vague encounter deep in the sea, explorer Leah emerges different. Her wife, Miri, notices she takes longer baths than usual, and drifts off while staring at the TV, different from her normal self. Miri tries to get past the couple’s new challenge — she calls Leah’s diving company, goes out with friends — but realizes that Leah, for some mysterious reason, is beyond saving. The book has several clever yet terrifying details, including the fact that each part’s name corresponds to an ocean layer, starting from the “Sunlight Zone,” eventually descending down to the terrifying “Abyssal” and “Hadal” Zones. Armfield pulls the reader into a horrifying world, smashing paranormal elements into mundane living, making her debut one of the most memorable novels of the year.

Across six interconnected stories, Jem Calder examines, with miraculous detail, what it means to be human in the age of technology. Often hailed as a ‘chronically online Sally Rooney,” Calder introduces us to Nick and Julia, characters that work together, and then are inseparable in each other’s minds. The idea of place is always vague, Calder only letting these characters inhabit some big city, lending the book a liminal quality: they could be floating in space, for all we know. The pandemic is included in the final story, but only as a basis for online communication, a natural progression of what we would have gone through, anyway. Calder examines the human psyche intimately, with a knowledge of awkwardness, longing, and ennui that comes with every restaurant job in your mid-20s.

The Hop by Diana Clarke

At a sex worker brothel in the middle of Nevada not unlike the Playboy house, Lady Lane (neé Kate Burns) quickly finds a home amongst The Hop’s enigmatic workers. Protected by a mysterious ‘Daddy’, who acts as the boss, the Bunnies of the house are able to carry out their work for multiple clients discreetly, earning large sums of cash in the process. But news leaks out that within the town, sex workers are being targeted with violence for unknown reasons. Her fellow Bunnies assure Lady Lane is safest within The Hop, but she can’t help but wonder about the intricacies and dynamics she’s gotten herself into. Told from her roots in rural New Zealand to her eventual fame, and from multiple points of view, The Hop dissects sex work, capitalism, and violence with a sharp wit and a page-turning saga.

Favourite of the Year: The Candy House by Jennifer Egan

At first glance, I was skeptical of The Candy House: speculative fiction, for me, is severely hit-and-miss. But after I read Candy House’s Pulitzer-winning companion novel, A Visit From the Goon Squad, I knew I’d have to get to it immediately. Goon Squad, a sprawling and multi-faceted exploration of time, aging, and the music industry told from multiple viewpoints and times, reads like an interlinked short story collection. Egan’s strength, and what made the novel so compelling: her ability to inhabit the mindsets of the most random of characters. “I find it really boring to write about myself or my life or people I know,” she frequently says.

The Candy House follows the same format as Goon Squad, but the threshold where it takes place is shifted forward; it primarily follows the invention of ‘Own Your Unconscious’ in 2010, which allows users to access the memories of any other user who agrees to participate. Egan is unafraid to make bold, futuristic leaps — ‘Own Your Unconscious’ may be a far-fetched idea, but she basically predicted the rise of Instagram in 2001’s Look at Me. Candy House also features an anthropologist who travels to reclusive cultures to figure out the mathematical principles that determine human judgment, later exploited by big tech companies — an idea familiar to anyone living in the Age of the Algorithm.

Being a music journalist as well as a book journalist, I feel like I should have an abundance of new albums to listen to, but sometimes, I oddly feel myself reaching to listen to Candy House — not on audiobook — but its essence. I want to distill its explosive scenarios and time-switching abilities down to its candy-colored components, its electric prose into a listenable song. My mind is Egan-ified; I’ve read Manhattan Beach, her 2017 historical novel following a Brooklyn Navy Yard diver in the 1940s, and purchased her three previous novels and one short story collection. For better or for worse, The Candy House has changed the way I think, and I haven’t read a book this year like it.