Audio-Drama Sequel to The Wicker Man in Production 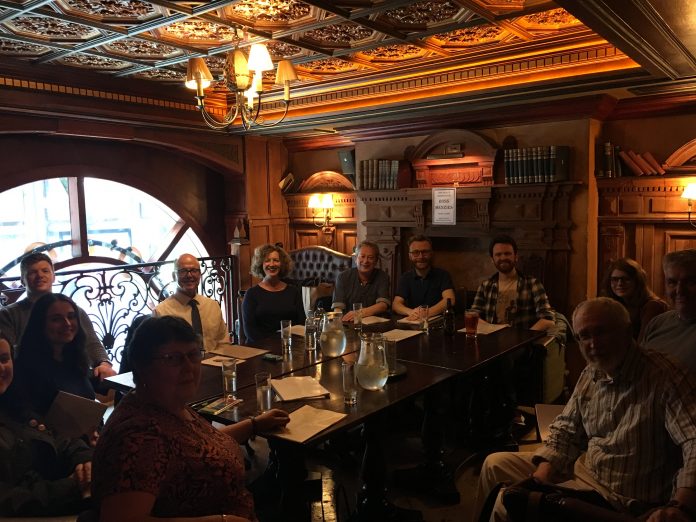 Robin Hardy’s 1973 The Wicker Man is rightly appreciated as one of the most remarkable horror films ever made. Subtle with its content, Hardy’s story of cult traditions and the power of faith is as poignant as it is horrifying. Now, Steven Sloss, former host of the Kaijusaurus Podcast, has set about bringing its obscure planned sequel to life.

Steven kindly spoke with Our Culture Mag about the production, how it came to be, and the place of Hardy’s film in today’s cultural climate. Talking to Steven, his affection for The Wicker Man and his excitement at the prospect of what The Loathsome Lambton Worm can be are palpable. Listening to his ideas truly makes you excited for what’s in store for audiences once the production is complete.

OC Chris: Thank you so much for talking to Our Culture Mag! How excited are you about directing this project?

Steven: It’s my pleasure, thank you for having me! And I’m very excited. Once Ross – my co-host and producing partner on the Kaijusaurus Podcast – and I wrapped up that particular project last year, we started thinking about where we could go next in terms of audio production. We wanted something that would be familiar in some ways, but a challenge in others. I’m a huge fan of Big Finish, a production company that produces audio dramas based on properties like Doctor Who, Torchwood, The Avengers, and other cult titles, and that’s what gave me the idea and drive to have a go at producing one of my own. Obviously audio drama is an entirely different ball game than producing a monthly podcast episode and – from what we’ve experienced so far – involves a hell of a lot more work, but a lot of the experiences we gained during our Kaijusaurus Podcast days have been incredibly helpful in preparing us for this new challenge. Podcasting is much more of a free-for-all in terms of getting your word out there, and I haven’t directed actors in a while, so I’m very excited to flex those muscles again.

OC Chris: Can you tell us a bit about The Loathsome Lambton Worm?

Steven: I first read about The Loathsome Lambton Worm years ago, during my university days, in Allan Brown’s excellent book “Inside the Wicker Man: How Not to Make a Cult Classic“. One of the addendums featured a full treatment from Anthony Shaffer (who wrote The Wicker Man, as well as things like Sleuth and Hitchcock’s Frenzy) for a strange sequel that was intended for production circa 1989. It was alternatively titled The Wicker Man II or The Loathsome Lambton Worm, which I think is just a fabulous title. Without giving too much away, it really takes things in a wildly different direction from the original film, and features a lot of truly bizarre sequences, perhaps even more so than The Wicker Man itself. At times, it reads equally like a medieval fairy tale and an Italian giallo horror. In terms of its fantasy content, it’s certainly a much less ambiguous and much more literal piece than its predecessor. Despite not being widely heard-of, I do think of it as one of the great “what-if” sequel treatments out there. It’s interesting too, because anyone with any sort of familiarity with The Wicker Man knows it ends pretty definitively, and The Loathsome Lambton Worm continues the story of Sergeant Neil Howie. It’s fun to see how Shaffer envisioned that character somehow surviving the original film. The treatment picks up right from the moment the original film concluded. I love sequels that do that, like Evil Dead II, or Back to the Future: Part II. I very much see the Lambton Worm sitting tidily with those sequels.

OC Chris: How do you think the themes of The Wicker Man sit with our current cultural climate?

Steven: We live in a world at the moment in which, if you are logged-on in any way, you are immediately subject to intense discourse and unrest. We’re constantly looking for the hard lines of where “right” and “wrong” are drawn, and how one can universally triumph over the other. I don’t even necessarily mean larger social, political, and culture issues when I talk about this. Even when considering comparably smaller things like a new film release, it seems we have to objectively, definitively categorise things as “good” or “bad”. If you’re not working in absolutes, then it’s somewhat seen as deviation or weakness, and therefore punishable. I see a lot of those attitudes in the relationship between Sergeant Howie (Edward Woodward) and Lord Summerisle (Christopher Lee), as they pit their beliefs and dichotomies against each other to see which will absolutely, profoundly triumph over the other. Both see themselves as definitively, staunchly correct, and are unwilling – not unable – to budge from their positions. Only at the film’s climax do you see a little bit of creeping doubt in Summerisle when Howie posits that he will be the next sacrificial victim, but instead of reconsidering, Summerilse instead doubles down on his hard line. Even if he doesn’t quite believe his own words, he believes they’ll save his own skin and that’s what matters to him. I see Howie and Summerisle as different kinds of hard-right characters, and the extremity of their views and beliefs and their unwillingness to back down from them are very evocative of our current political and cultural climate.

I also think there’s some relevance in how easily led both Howie and the residents of Summerisle are; Howie by his religious beliefs, and the islanders by Lord Summerilse himself. We’re in an extremely dangerous time right now in which it is incredibly easy for impressionable young men in particular to find themselves at the mercy of online radicalisation, telling them they are victims in some imaginary war on their way of life. We see daily that such individuals can be driven to violent atrocities in the name of a cause that doesn’t exist. I see a parallel there in the heinous act the residents of Summerisle are driven to by their Lord. Howie is also a slave to his beliefs. He is characterised as a “Christian copper”, and often acts in the name of Christianity first and the law second. This is taken to a tragic conclusion in the film’s finale, when he is practically willing to become a martyr for his beliefs. I think it all comes down to having the strength to simply think for yourself and resist being manipulated and led. Howie and the Summerislanders could learn from that.

OC Chris: How did this production start?

Steven: I mentioned earlier about wanting to have a go at producing an audio drama, but the question remained – what should it be? I knew I wanted to adapt a pre-existing text as a starting point, and that’s when it suddenly hit me. I’d wanted to see The Loathsome Lambton Worm come to life for years, and always wished someone had made it – so I thought, I’ll do it! Since I don’t exactly have the means or money to film such a story however, I thought the incredible versatility of audio as a medium would serve it well. I got in touch with Ross and asked him if it’d be something he’d be interested in producing together, and he was immediately keen to jump aboard. We’ve been friends for years and we work together incredibly well. We always seem to be in-sync with creative decisions, and he’s been the perfect producer. From there, I dug out Brown’s book and re-familiarised myself with Shaffer’s original treatment and set about fleshing it out into a full audio drama script. I’ve said to a few people during production that an important part of adaptation is realising that not only do some things not work when translated to a different medium – some things just don’t work, period. Being able to recognise and accept that is one of the key strengths in adaptation, I think. It’s not disrespectful to the original writers, I don’t think. It’s simply working out what is best for your piece. I do think people put too much stock in adhering to the author’s work, especially when we have long moved past the era of “faithful” adaptations. Things like Jaws and Jurassic Park only resemble their source material in broad strokes. Similarly, I reckon our script is roughly 50% Shaffer, 50% me. The broad strokes of the story all come from Shaffer, but a good bulk of the dialogue and character motivations are from me. I hope the finished product sounds like a cohesive piece, and not like two authors competing for the loudest voice.

OC Chris: You’ve recently had some table read-throughs with your cast. How have they been?

Steven: We had our first read-through earlier this month, and it really was fabulous. We’ve assembled such a talented cast and they brought the script to life wonderfully. It was incredibly vindicating to see everyone react to the piece so well, and get along with each other too. There’s already some excellent chemistry forming between some core cast members, especially Alec Westwood who’s playing Sergeant Howie, and Jamie Roberts as Lord Summerisle. I was very clear that we were not looking for simple impersonations or impressions of the original, iconic performers, and Alec and Jamie delivered such interesting and intense takes on these iconic characters. We also have Fiona MacKinnon as Mary Bannock, Howie’s fiancee who was only briefly glimpsed in the original film. Fiona perfectly embodies Mary’s serene, calm nature, which complements Alec’s intense, frustrated Howie wonderfully. We’ve been lucky to find such an incredibly talented group, and we really think listeners will enjoy hearing this colourful cast of characters brought back to life. We recently announced our entire cast on our Twitter (@Lambton_Worm), so head over there to have a look and keep up to date with everything to do with the project.

OC Chris: When can we expect to hear the finished audiodrama?

Steven: We’re aiming to record in July, with any additional work being completed if necessary in August. Without giving too much away, Hallowe’en plays an important part in the piece, so we’d ideally like to release on 31st October. That’s tentative at the moment and is dependent on how successful our recording and post-production sessions are, but here’s hoping!

Thank you so much for speaking with us, Steven! The Loathsome Lambton Worm sounds like an incredibly intriguing project, and we at Our Culture Mag cannot wait to listen to it!

To show your support for Steven and the Lambton Worm, check out their social media feeds here at @StevenScrivello and @Lambton_Worm!