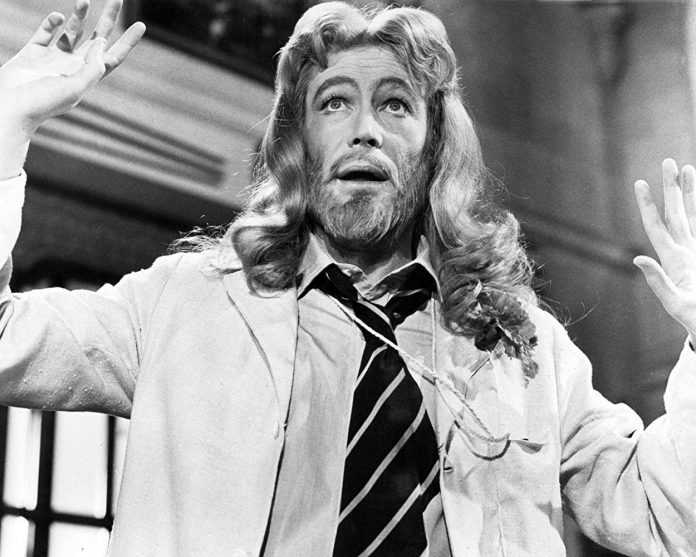 The Ruling Class (1972) is one of the strangest films I have ever seen. ‘Strange’ is a word with several meanings. A ‘strange film’ may be disturbing, unorthodox, or just totally insane. The Ruling Class possesses all three of these qualities, with a lot of confused laughter in-between. It is, as are many of the strange films I see, inexplicably logical and undeniably praiseworthy. Friends, do allow me to share it with you now.

It’s the classic anarchical satire. And by classic, I mean ‘not classic at all and in fact totally bonkers’. I first discovered The Ruling Class several years ago, having been led to the dark corners of the Internet by an adolescent love for Peter O’Toole. The late, lovely O’Toole captivated me with performances like that of the dashing crime expert in How to Steal a Million (1966), co-starring Audrey Hepburn, and, of course, that of Lawrence of Arabia (1962). He was so handsome, so charming, so passionate! And those big blue eyes! I scoured the Internet for all the footage I could find.

That’s when I found this scream.

…Never in my life have I been more taken aback. I couldn’t help but laugh. (Could you?) And I had to know more. I found the film, skimmed it, and my young brain exploded at the images that passed briefly before me. Peter O’Toole standing on a cross, dancing the “Varsity Drag”, peeping like a love bird, and getting thrown down a flight of stairs by a gorilla in top hat and tails. (Yes, this all actually happens in the film.) Why? At the time, I didn’t stay long enough to find out. I enjoyed glimpses of Peter O’Toole as a singing, screaming lunatic, then tucked The Ruling Class into the recesses of my memory.

Leaping back to the present day, I can proudly say that I have seen this film in its entirety. It takes godlike endurance to watch The Ruling Class, and I by no means recommend it to those of you who are sensitive to sacrilege, vulgarity, or vulgar sacrilege. I myself dislike all three and got through without a scrape – but, the Brits gave it an X-rating for a reason. For myself, I find The Ruling Class enlightening and highly impressive.  In order to succeed with a story so scrambled, so perverse, you need a really stellar cast and crew. Luckily, this film has the advantage of both.

Adapted from the Peter Barnes play of the same name, by Barnes himself, The Ruling Class is a taunting depiction of English peers and all their illusions of grandeur. Jack Gurney, played by O’Toole is a ‘paranoid schizophrenic’, who has inherited the earldom after the death of his father, the thirteenth Earl of Gurney. (Cause of death? Strangulation in a tutu. No further details necessary.) The trouble is, Jack copes with being a lonely member of a family of peers by declaring himself the sun and the moon, the divine mover and remover, the God of Love, the Christ.

How did  Jack discover his godliness? The voices of St. Francis, Socrates, General Gordon and Timothy O’Leary told him he was God. So, Jack – but you must never call him that. You’re restricted to “any of the nine billion names for God.” So, “your lordship, J.C., Eric, Bert, Barney Entwistle,” goes about declaring the message of love. He chases society matrons calling himself the Resurrection and the Life, blesses grasshoppers, and lifts tables ten feet in the air (or, rather, tries). And maddest of all, in the eyes of the Gurney family, J.C. believes “Love makes all men equal.”

Jack’s uncle Sir Charles (William Mervyn), seeks to rectify this lunacy by plotting against his newly enlightened nephew. If they can’t control this delusional earl, they can control his son. The family suggests he marry and produce an heir, but J.C. insists he is already married to la dame aux camelias, the consumption-victim courtesan from the Alexandre Dumas novel and the opera La traviata. This detail appears to be utterly random, but it’s all a part of Barney Entwistle’s plan. Author Peter Barnes’ brings love of a prostitute to an ironical conclusion later on.

Sir Charles rectifies the problem of J.C.’s marriage by producing the Lady of the Camellias. His own mistress, Grace (Carolyn Seymour), plays the part to perfection. They have a second wedding and common Grace happens to fall in love with the God of Love. That’s when the family and Jack’s psychiatrist decide to play hardball. They try several methods of treatment before bringing in another psychiatric patient: the High Voltage Messiah. “The Electric Christ. The AC/DC God.” After a little God showdown, in which Jack is conflicted by the presence of two God’s in the same room, the High Voltage Messiah shoots him with ten million watts of electricity (apparently). When Jack wakes up from his traumatised stupor, he is seemingly recovered.

Little do they know that when he says “I am Jack,” he means Jack the Ripper. And still God. But the vengeful, punishing Old Testament God who, in accordance with the changing times, has come to the world as Jack the Ripper. He’s out to destroy the immoral flesh of loose women – first his aunt, then his wife – and rid the world of all evil through corporeal punishment. Luckily, this suits the ruling class just fine! His family and peers see nothing wrong with him. Even a court-appointed psychiatrist finds him absolutely normal.

The rest of the plot I’ll leave for your own viewing or, if you won’t view the film, your own bewildered speculation. However, I will tell you all, brave and bewildered alike, that it is hilariously, inappropriately well-done. As an amalgam of irreverent social slander and far-and-wide cultural references – it’s unique and startling. As a black comedy crossed with a ragtime musical crossed with a horrific scream fest – it’s an unsettling, oddly compelling delight.

The success of this everything-in-the-cupboard-pressure-cooked-stew is easily attributed to Barnes’ script, full of witty delights, the innovations of Peter Medak and Ken Hodges, and an all-around brilliant cast. If delusory images of a cobweb-embossed House of skeleton Lords, or an effortless cinematographic transition from manor house to Ripper London, do not serve to enlighten or impress, Peter O’Toole will arrive on the wings of thespian angels. You will be astounded by his total embodiment of the pained lunatic. The artless, gibbering stutters, the gentle and crazed physicality, the mad, miserable motives that are unidentifiable and yet tangible. O’Toole gracefully delivers both the short laugh-burster lines and the sick man’s panoramic rhapsodies. Oh, and he drops the f-bomb on a rabbit.

The Ruling Class is, without doubt, one of the strangest films I’ve ever seen. One through which I am forever changed, and by which we should all endeavour to satirise our world – in the most brilliantly psychotic way possible.