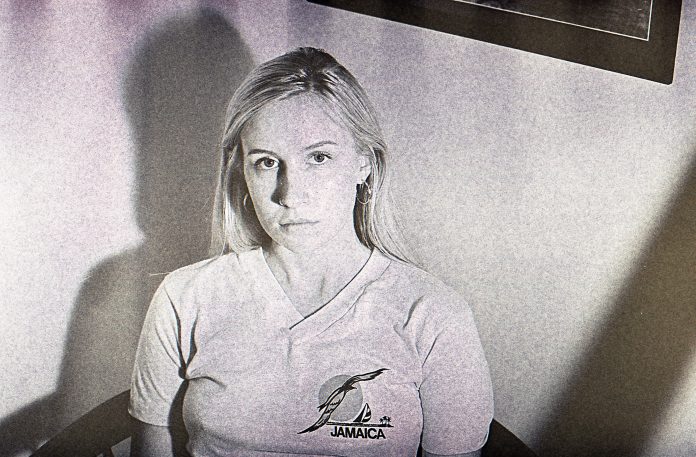 Rosemary is a singer-songwriter hailing from Wilmington, North Carolina. She’s been releasing music on Bandcamp since 2014, ranging from lo-fi singer-songwriter to acoustic ambient to experimental psych-pop. Earlier this year, she came out with songs for sleep, a gorgeously soothing compilation of songs that sounds like a cross between a stripped-down version of a Grouper album and the confessional compositions of Julien Baker, as well as demos, an acoustic EP of songs she’s mostly been playing live. When compared to her first release, male induced migraines, demos showcases how much rosemary has grown as an artist: she has refined and tightened her songwriting without abandoning her DIY aesthetic. Any of these songs could have easily been recorded with a full band in the studio, but even as demos, their essence remains, and is perhaps even enhanced by the intimacy and rawness of the recordings. It’s her catchiest, most engaging collection of tracks yet, and a promising sign of what’s to come.

We caught up with rosemary for this edition of our Artist Spotlight series, where we showcase up-and-coming artists and give them a chance to talk a bit about their music.

I’ve always loved the way making music made me feel. As a little kid, I’d sing at my family members for hours on end so as an attempt to reign in that unbridled passion for music, I tried out piano lessons. I had such a hard time reading music so I started relying heavily on my ear to learn how to play and I still do today. I picked up guitar when I was 13 and since then I’ve been playing and writing consistently. I can’t separate myself from music. It’s been the only constant in my ever-changing life. It’s just necessary.

What are some of your influences, musical or not?

During my first year of college, I remember seeing Greta Kline (Frankie Cosmos) sing with Aaron Maine (Porches) at a super small show at a music shop in my home town. Greta’s voice was so delicate and I was totally enamored by the entire set. After that, I listened to “affirms glinting” at least twice a day for an entire year. The album felt so intimate and authentic. It was something I desperately needed to hear during this time and it empowered me to pour my full self into my music and just start posting everything I had onto my Soundcloud without thinking twice about it. Porches’ “Scrap and Love Songs Revisited” was also extremely formative for me as well. Aside from that, I think Andy Shauf, Real Estate, Fleetwood Mac, Marika Hackman, and Alvvays are also some of my big influences.

Why did you pick the name rosemary?

My mother took care of an elderly woman named Rosemary while I was in high school. When she passed away, I ended up with a lot of her clothes which were beautiful and well kept and I wore a lot of them. I ended up taking on the name Rosemary ironically as an alter-ego, but the name started to feel like a natural fit. My middle name is Rose and my family calls me Rosie, so it felt right to put my music up under rosemary.

Do you record and produce your music completely by yourself? What is it about that approach that appeals to you?

Aside from the experimental Halloween album I put out on my bandcamp, everything I’ve ever recorded has been done on my phone with GarageBand. I’m very intimidated by recording on my computer and I psyche myself out a lot. I’ll usually sit on the floor of my bedroom, bathroom, or kitchen, and create instrumental loops until I feel like I’m floating in sound and zoned out. It’s a very intimate and cathartic process. I’m usually writing my best music when I’m extremely depressed so to work through it I really need that alone time to process and pour everything out. I start writing what I need to hear and then I start to feel lighter.

Can you walk us through the process of writing your latest EP, demos? What were some of the things you were thinking about?

‘demos’ is a compilation of songs that I’ve mostly been playing live. They’re definitely more stripped-down than what I play live when I have my friends on bass and drums (I think that sound is definitely more exciting). But, I had these recordings scattered, some never even uploaded, and I was starting to get a few people reaching out after shows asking if I had recordings of certain songs I played, so I just really wanted to have these demos all in one place to easily share.

What’s your favorite track off the EP and why?

‘Remi’ is the most fun to play live and I’ve gotten really awesome feedback on it. I love to play it because people will dance and it’s a wild feeling to see people moving to the sound that I’m putting out there. I think ‘Sprocket’ is my favorite though. I love the jangly lead guitar sound. It’s an exaggerated story about wanting to be good enough for someone you’re interested in, but never being able to satisfy their needs because at the end of the day you’re just not the one they want. It’s about taking a step back and realizing you can’t change yourself to please others. Let them have their space and figure their own crap out. Get on your bike and peace out of there.

‘songs for sleep’ is a compilation of demos that I’ve dozed off to at one point. When I first started putting my music online, I was creating really layered, floaty, and calming sounds. I had a few friends reach out to me all around the same time to tell me they’d used my music to relax to and it opened up some really cool, honest conversations. That’s when I first felt like sharing my music with others had a purpose – to help people relax and maybe not think about whatever shit they had going on even if only for a minute. So, I was recently itching to release something on bandcamp and started digging through old demos. Some of the songs are close to 5 years old like ‘bird’, ‘without a doubt’, and ‘float until rested’ and some are new within the last year like ‘dream river’ and ’12218’. I really hoped that this compilation would help some people feel a little lighter, a little calmer.

If you could cover any song that was released after you put out ‘some covers’, which would you choose?

Probably anything from Andy Shauf or Marika Hackman!

Do you have any plans for the future?

I don’t know what’s next. I’d like to finally put out an actual album, maybe get that on bandcamp and Spotify. Maybe play more shows with my friends and continue trying to help grow the music community where I’m currently living. I’d like to connect with other artists, learn about what they’re doing, share stories, share sounds, be a mentor or resource to those who need it, learn more about gear, learn more about recording and producing. There’s a lot I’d like to do. I’m taking every day as it comes.