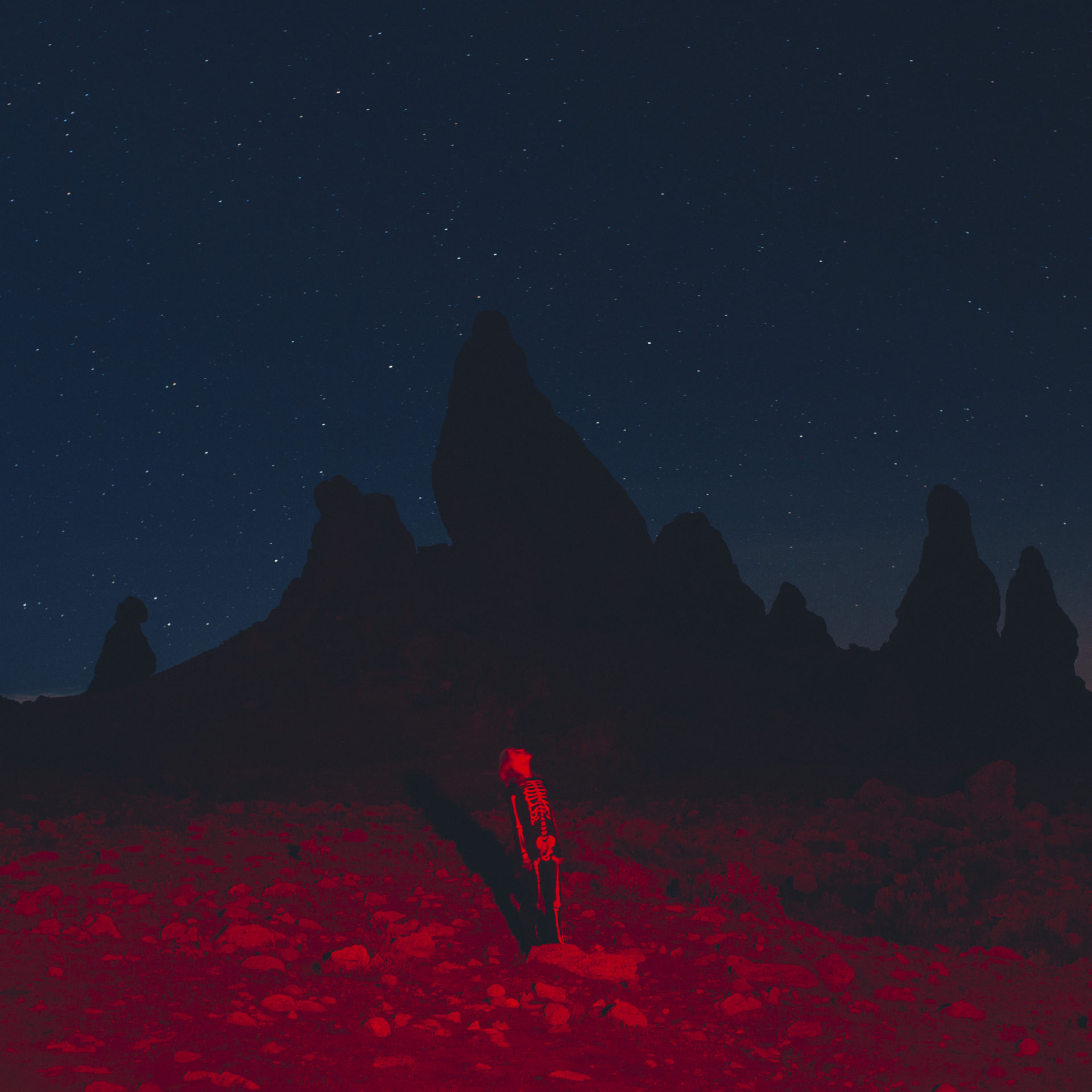 When I first saw the cover artwork for Phoebe Bridgers’ Punisher, it immediately struck me as one of the most evocative album covers I’d ever seen. It seemed to hint at so much of what the album would go on to deliver just a few months later, encapsulating the whole atmosphere of the record in a single image. The setting captures a sense of desolation, Bridgers standing in the desert alone in her trademark skeleton suit, and yet its vivid tones are also imbued with the kind of warmth and beauty that permeates her soul-stirring music. There’s an otherworldly feel to it, too, as if the picture was taken on a different planet, or maybe right after the apocalypse; it also feels like a reflection of the way the album builds a world of its own, one that’s both haunting and profoundly human. Bridgers was nowhere to be seen on the cover of her 2017 debut, Stranger in the Alps; here, her presence is small but unmistakable, placed front and center. She is alone except for the large rocks that loom over her, which seem to almost have a life of their own, the one on the far left corner almost mirroring Bridgers’ own shadowy figure. She leans slightly backwards and looks up at the clear sky, not in search of some higher truth but simply a sign that we’re not alone. The rest, she lays out on Punisher.

The photographer behind the cover, as well as some of the accompanying vinyl and press shots, is Olof Grind, a queer artist based in Stockholm, Sweden. Browsing through his portfolio, it’s not hard to see why his visual style turned out to be a perfect fit for Phoebe Bridgers’ sound and aesthetic; his consistently stunning work often centers around intimate scenes set against wondrous and dreamy natural backdrops.

For the first instalment of our Behind the Artwork series, we caught up with Olof and asked him a few questions about how he got into photography, working with Phoebe Bridgers, his debut single, and more.

I started out at a very young age with my parents’ old analogue point and shoot-camera. I remember bringing it and shooting a roll on a spring break when I was 12, instantly falling for the format. My parents are both artists, so to create has been with me ever since I was a child. I grew up in the countryside of Sweden and got particularly caught with the possibility of capturing all the wonderful sceneries around where I lived. The foggy lakes in autumn and the flowing rivers covered with ice in the winter. I was quite a lonely child throughout parts of my adolescence, and spending time in nature with my camera was like meditation and a way to explore the world by myself.

Are there any particular themes that you find yourself continually drawn to?

I always come back to nature and all the crazy beautiful places that I discover while traveling. But I’m also always drawn to humans’ relationship to this planet. We exist because of nature and our bodies will inevitably decompose and merge with the soil at some point in time. But still, we feel free to exploit it and destroy it however we like. I’m curious to explore the individual’s relationship to nature by shooting them stripped off belongings, emerged in some far off grid plain nature site where they can dive into their emotions and energies connected to the surroundings and the planet.

How did you become involved with the artwork for Phoebe Bridgers’ new album?

I met Phoebe through our common friend Emily Bannon when Phoebe was playing a live show with her project Better Oblivion Community Center in the spring of 2019 in Stockholm. Emily told me to text Phoebe since she thought we would get along, and I sent over a silly text message and ended up coming to their show and hanging out. We had a blast and went out for some drinks afterwards with the whole band. I hadn’t really heard any of Phoebe’s solo-project before that day, but ended up checking it out a while after we met and loved it instantly.

In the fall, her manager contacted me to plan a shoot in London since she was gonna be there for a concert and Sweden is not too far. I wasn’t super excited to shoot in London (especially in November with the weather) since I envisioned a more stunning natural scenery for the photos. One month before I was supposed to do the shoot with Phoebe in England I ended up going to LA to visit Emily. I thought that since I was there anyway I could suggest a bunch of different locations where I was excited to shoot throughout California to Phoebe and her management. And so we managed to fit in a 24-hour road trip shoot where we drove out into the desert, back down to the coast and stopped at a bunch of places in between.

Could you talk about the inspiration for the cover? How was the process of shooting it?

So, when I was shooting in the desert it wasn’t set in stone to be the actual cover of the album. It was more like “let’s try all these different locations and ideas we have and see what we will get out of it”. But the red light-desert-scene was the one I was looking forward the most and had the strongest vision about. I used to do night photography a lot when I was younger and had always wanted to make a proper shoot for something in the desert with the clear sky above. Phoebe always told me that she liked my creepy images the best, so the creepier/the more surreal the better. I brought a flashlight and a red gel-filter and light painted the desert over a 30 second shutter speed, while she was standing completely still waiting to be beamed up by aliens. I always love a good adventure while shooting, and driving out in a pitch black desert at 3 AM on dirt roads definitely added to my excitement for the shoot.

Emily came along and acted assistant/creepy naked alien in the background of the scenery (you can see her make an appearance on the back cover of the vinyl). The idea with the skeleton costume actually came around the time when we did the second shoot in London, so in January when everything was set for the cover, I actually came back to LA, drove out into the desert again, set up the tripod at the exact same location and recreated the shot we had taken in October, but with her in a skeleton costume instead.

Was your approach in any way different to what you’d done before?

Not really, I always tend to overshoot and want to visit a million different locations when I get started. I literally sent over like 300 edited images to Phoebe because of all the various locations we went to.

You also worked on the accompanying artwork for the vinyl as well as press photos – what sort of mood were trying to evoke with those?

The artwork photos were shot as a complement to the rest of the package. I wanted to keep it in the same dreamy/surreal feeling with a hint of unease. I guess it’s a kind of vibe that goes through most of my work and the mood that I’m aiming at for my personal work as well. I feel like Phoebe’s music is floating around in the same spectra as my art, so I guess we hit it off pretty well creatively.

You recently released your debut single as Luminous Kid. How did you decide to get into music, and what was the inspiration for the song?

I’ve always played music, the piano and the guitar, but I found photography so early in life, so I never gave myself time to actually write music for myself. In 2018 I did a 6-month travel throughout South America, from Colombia down through Ecuador, Peru and Bolivia. I looked upon it as a creative exploration trip where I wanted to play my guitar, write, paint and shoot on film and focus fully on that, no commissioned work or distractions. I ended up with over 25 songs by the time that I came back and decided it would be fun to record an indie/bedroom pop-album from the songs I had gathered. It was kind of like making an homage to my teen-self where I used to sit and cover sad indie songs in my bedroom, not having the courage to write my own stuff.

The first single is about a three-week love story that I experienced in Paris one warm February. I fell in love with this boy and we started writing semi-ironic old style-love letters to each other after I left the city. Based on the letters and the time we had spent together I wrote the song. Production wise for this track I’m flirting a lot with the big ambient soundscapes of Sigur Rós, while the songwriting and singing is inspired by musicians like Elliot Smith and Leonard Cohen.

What are you currently working on?

I’m finishing up the last parts of mixing and mastering my debut album, it’s 13-track so there’s quite some work getting everything together. I’m also making music videos for coming singles and album art etc. I’m planning on releasing a photo book with the vinyl, so this is in the pipeline as well. But I also work full time with commissioned photography work so it’s a puzzle to get everything together. I’m releasing my next single in a few weeks, which feels very exciting!