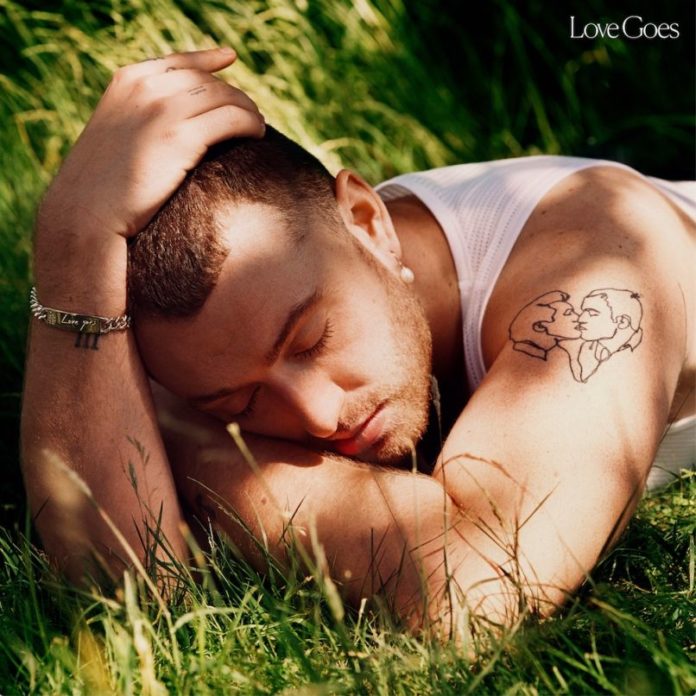 Sam Smith’s third studio album begins with a declaration: “I want to be wild and young,” they intone, less a plea than a haunting evocation of a former self. Across 11 tracks – plus 6 previously released bonus songs – the British singer revisits the perennial theme of heartbreak, but does so in a way that hints at the deeper process of personal transformation that occurred in years since the release of 2017’s The Thrill of It At All, which Smith has called the “most experimental time” of their life. “Experimental” is probably the last thing you would call Love Goes, arriving six months later than planned after changing its name from To Die For for obvious reasons, but the album does mix a few different styles, oscillating between the disco-inflected euphoria of Smith’s breakout Disclosure collaboration ‘Latch’ and the stripped-back melancholy of the breakup ballads that catapulted them into stardom. That variation in tone is reflective of the internal conflicts Smith wrestled with in the aftermath of their “first real heartbreak”, but the boilerplate instrumentals and generic songwriting too often fail to adequately complement the emotional depths of what the singer so capably emotes.

Still, the versatility of Smith’s powerhouse of a voice allows them to glide through all of it pretty effortlessly. The spare, heart-wrenching opener ‘Young’ is followed by ‘Diamonds’, a solid dance-pop tune in which the singer reminds their former lover “how little I care/ how little I care/ how little I care” – unfortunately, it’s this sentiment that the track’s overly sanitized production clings to rather than underscoring the emotional nuance or potency of Smith’s impassioned delivery. Both ‘Another One’ and ‘My Oasis’ fall back into colourless, radio-friendly grooves, though the latter does boast an unexpected but lively feature from Burna Boy. A blocky synth line runs through ‘So Serious’, offering a moment of respite from the heightened sense of melodrama as Smith gleefully invites listeners to “put your hands in the air if you sometimes ever get sad like me.” It’s the singer’s self-conscious lyrics that really shine through here – rather than just another track about feeling sad, it’s a wonderfully understated song about the guilt that often comes with feeling any emotion too intensely: “God, I don’t know why I get so serious sometimes,” they lament.

Smith is then able to fully let go on the following track, ‘Dance (‘Til You Love Someone Else)’, where the intoxicating production courtesy of Disclosure’s Guy Lawrence and Two Inch Punch renders it a much more captivating version of the Normani-assisted early single ‘Dancing with a Stranger’. The album retreats back into familiar ballad territory on ‘For the Lover That I Lost’ and ‘Forgive Myself’ (thankfully, not that familiar), but reaches its most stirring moment on the Labirinth collaboration ‘Love Goes’, with Smith’s delicate voice pirouetting around the titular line over a crystalline piano that blooms into a lush, Coldplay-esque orchestral finish; the beat, however, feels somewhat stiff, as if unable to fully carry that expansive feeling of freedom that the song shoots for.

The wistful closer, ‘Kids Again’, which Smith says is a hint of what’s coming on the next record, is held back by the same issue that waters down so much of the album: a naturally layered vocal performance, but a sonic backdrop that’s too bland to effectively sell it (with the notable exception of that weeping guitar solo at the end). Love Goes quickly loses momentum as you dive into the bonus tracks – none of which achieve anything the rest of the album hasn’t already done better – but as a whole, it proves that whenever Smith leans into that rawness and vulnerability with an instrumental that does them justice, the effect can be not only satisfying but also genuinely cathartic. Even without an accompanying instrumental, the record’s opening track is striking precisely because it allows Smith to embody their younger self as a commentary on fame and success, while ‘Kids Again’ gravitates towards a pure kind of nostalgia as it longs for the wildness of youth – even when striving for something new, Love Goes ultimately clings to the familiar.

Album Review: Sam Smith, 'Love Goes'Sam Smith’s third studio album begins with a declaration: “I want to be wild and young,” they intone, less a plea than a haunting evocation of a former self. Across 11 tracks – plus 6 previously released bonus songs – the British singer revisits...