Album Review: Mourn, ‘Self Worth’ 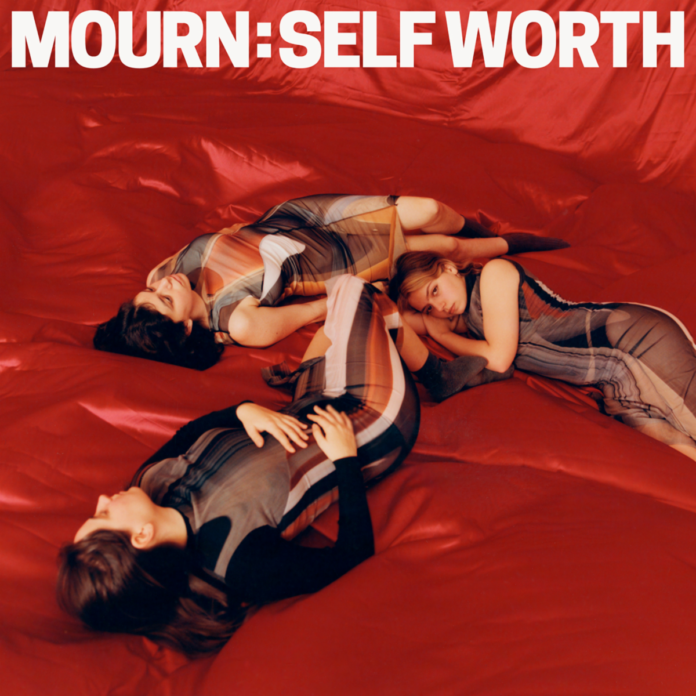 Mourn don’t mince words. You can tell as much on the Catalonian quartet’s fourth studio album, which opens with the group alternating between two open chords as they repeat the titular line, “This feeling is disgusting,” before a single voice rings out: “It sucks!” The band then lets out all their pent-up frustration in an outburst of punchy guitar riffs and sticky hooks, delivered with the fierce directness you’ve come to expect from the punk outfit that released their debut album while all four members were still in their teens and weren’t afraid to name their enemies. After fleshing out their sound on 2016’s post-punkish Ha, Ha, He. and 2018’s Sorpresa Familia, Mourn sound as confident as ever on the aptly-titled Self Worth, which marks their first release without former drummer Antonio Postius.

Growing up might just mean having more things to be angry about, but Mourn’s music still boils over with that same raw dynamism that’s characterized their remarkably consistent output thus far. ‘Men’ channels the same uncompromising energy of the band’s 2014 bonus cut ‘Boys Are Cunts’, but crafts a more overtly feminist polemic out of that general sense of distrust: “My boundaries are disrespected all times/ They think they do things for me/ But they’re doing them to me,” they holler, adding, “In their eyes I am meat.” The track is also a testament to the ways in which the band has been able to hone their songwriting without compromising on emotional intensity; its most visceral moment comes when the singer turns the scrutinizing male gaze on them, scanning through “their mouth, their head, their ears/ their stomach, their feet, their tongue/ their teeth, their guts, their brain,” and so on before stripping them of “their pride, their voice, their thoughts/ their lust, their shame, their power.”

Through fiery guitars and impassioned vocal harmonies courtesy of Carla Pérez Vas and Jazz Rodríguez Bueno, Self Worth makes the pressures of what are otherwise be perceived as abstract concepts – the patriarchy, society at large – feel palpably real. While tracks like ‘Men’ and ‘Apathy’ see Mourn railing against misogyny, much of the album also digs into the anxieties of adulthood and the responsibilities that come with it, but does so in a way that underscores the systemic issues that have allowed these personal insecurities to fester in the first place. Though sung in the first person, the lyrics of the relatively spare ‘Worthy Mushroom’ sound more like a unified expression of the group’s shared experience as musicians who constantly feel like they have to prove their worth to a world that doesn’t value their work. It’s not often that Mourn use figurative language, so when they do – “I feel like I’m valid/As a mushroom in the woods/ Hidden small between the moss/ Sitting under the shadows” – the feeling becomes all the more potent.

It’s not just these external pressures that feel inescapably present, however; the songs also have the effect of amplifying Mourn’s collective voice, thus rejecting the notion, as expressed on ‘House, Hold’, that they’re “just an idea” to be exploited for someone else’s gain. Part of this is because the vocals are a bit more pronounced here than they were on the darkly-tinged Sorpresa Familia, the melodies a bit more vibrant. “I’m staying small/ Small and focused,” they proclaim on ‘I’m In Trouble’ – focused, absolutely; small, not so much. The track is an thunderous display of the band’s tight chemistry, with new drummer Victor Álvarez Ridao and Leia Rodríguez’s rhythm section particularly standing out. Though Mourn don’t particularly stray from their trademark sound on Self Worth, there are a few interesting sonic excursions: ‘Stay There’ is noisy and abrasive in a way the band has rarely if ever been, while the melodic ‘The Tree’, though perhaps not the most experimental thing on the planet, certainly sounds like it could have a place somewhere in The Woods. “The future is uncertain” might be one of the most resonant lines on the album, but Mourn have nonetheless come through with their most self-assured and empowering effort to date.

Album Review: Mourn, 'Self Worth'Mourn don’t mince words. You can tell as much on the Catalonian quartet’s fourth studio album, which opens with the group alternating between two open chords as they repeat the titular line, “This feeling is disgusting,” before a single voice rings out: “It sucks!”...