Record label Jagjaguwar is celebrating its 25th anniversary with a year-long initiative called JAG25. Each installment from the four-part project is known as a Jag Quarterly, and yesterday, the label announced the first release, Dilate Your Heart, a spoken-word album by American poet and essayist Ross Gay featuring contributions from Bon Iver, Mary Lattimore, Angel Bat Dawid, Gia Margaret, and Sam Gendel. Below, listen to the album’s first single, a 14-minute collaboration between Ross Gay and Bon Iver titled ‘Catalog of Unabashed Gratitude’, and check out the cover artwork and tracklist.

Dilate Your Heart will arrive digitally on March 26 and physically on April 9. Future releases from JAG25 will feature contributions from Lonnie Holley, Moses Sumney, Perfume Genius, Sharon Van Etten, and many others. Each release will “resurrect a different mantra from the label’s past, and imbue it with new meaning,” according to a press release. In addition to Dilate Your Heart, these mantras are: This is a Mindfulness Drill, Join the Ritual, and Sentimental Noise. 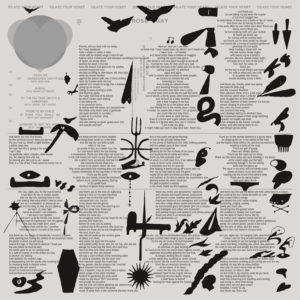 1. Catalog of Unabashed Gratitude (with Bon Iver)
2. Burial (with Mary Lattimore)
3. To The Fig Tree On 9th & Christian (with Angel Bat Dawid)
4. Poem To My Child, If Ever You Shall Be (with Gia Margaret)
5. Sorrow Is Not My Name (with Sam Gendel)