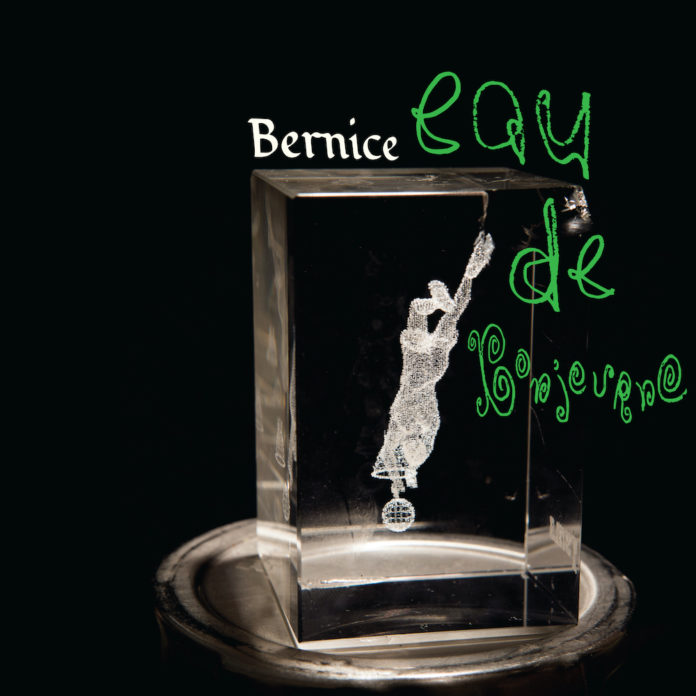 Bernice, the Toronto group led by Robin Dann and her backing band of musicians, craft songs that meet at the crossroads of R&B and pop. Their third full-length album, Eau De Bonjourno, feels like being invited into the studio as all manner of improvisation unfolds, on its own terms and at its own pace. It’s not difficult to imagine other musicians enjoying listening to Bernice: the band allows so much breathing space in their songs that you begin to notice patterns, pick up little notes here and there that you might have missed upon first listen.

Their new album was released by Toronto’s excellent Telephone Explosion Records, home to the likes of Deliluh and Teenanger, but Bernice’s sound doesn’t necessarily fit the prevailing sounds of the city’s current music scene. They sound a little like Crumb without the overt psychedelic themes; all the band’s members have backgrounds in jazz – hence the improvisatory nature of the music – and could be compared to Black Country, New Road if there was more playfulness in their approach.

The first half of Eau De Bonjourno holds the strongest singles. The patient rhythm on ‘Groove Elation’ is interrupted by wondrous spurts of saxophone; the personal ‘It’s Me, Robin’ is a delightful and delicate ode to finding peace with yourself. Dann is possessed of a gracious and flexible voice: she can combine for angelic harmonies on ‘Empty Cup’ and sound suave and seductive on the slinking R&B track ‘Infinite Love’. The way she breathes every word has an almost soothing effect.

The group wrote the album together in an old-school container on Toronto Island, and a sense of wanting to banish disconnection and find something deeper comes through. Dann notes “dogs on the highway” and watches “a beaver eating smooth red bark,” while the swooning ballad ‘Lone Swan’ is about the misunderstood qualities of that graceful bird. ‘Personal Bubble’ was written in late 2019, but its sentiment feels especially relatable in the context of the last year: “You’re not allowed in my personal bubble/ Please step away from my personal bubble,” Dann sighs, something not enough people did in 2020.

The shapeshifting instrumentation begins to dominate as the album drifts slowly to its conclusion. The languorous ‘Your Beautiful House’ begins like a hazy radio transmission dipping in and out before an impactful piano line passes through country twangs and zapping sound effects. ‘We Choose You’ is pure atmospherics, all lo-fi beats that are ever-moving and disjointed. Much of the album is airy and dreamy, and as a result it can often feel too lightweight, too ephemeral. The songs seem to arrive formed for the first time; this is a first take, a first try, you might think. It’s why they sound like straightforward pop songs deconstructed and stripped bare, just playthings for Bernice to explore; and it’s why getting lost in their sound can elicit an almost childlike sense of wonder and curiosity.

Album Review: Bernice, 'Eau De Bonjourno'Bernice, the Toronto group led by Robin Dann and her backing band of musicians, craft songs that meet at the crossroads of R&B and pop. Their third full-length album, Eau De Bonjourno, feels like being invited into the studio as all manner of improvisation...